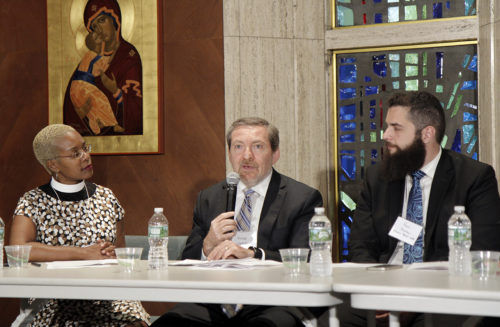 [Episcopal News Service] Judaism, like all religious traditions, calls Rabbi Victor Urecki to welcome the stranger, the refugee. In the Torah, God tells the Jews no less than 36 times to “love the strangers in their midst,” reminding them they were once strangers in Egypt, he said.

Still, it’s not Urecki’s Jewish faith that drives him to welcome and to assist refugees arriving in Charleston, West Virginia. “As a Jew, I feel I’m called to be there for refugees because the refugee story is very personal for Jews,” said Urecki, a West Virginia Interfaith Refugee Ministry adviser. “It’s my people’s story. The image of every refugee should be an image imprinted on every Jew’s heart.”

Urecki spoke on a six-person panel during a June 20 interfaith conversation and prayer for World Refugee Day hosted by Episcopal Migration Ministries at the Episcopal Church Center in New York. An iftar, the meal eaten by Muslims after sunset during Ramadan, followed the panel conversation. (The holy month of Ramadan, observed by Muslims worldwide as a month of fasting to commemorate the first revelation of the Qur’an to Muhammad, began May 26 and ends June 24.)

EMM encouraged congregations across the country to host similar interfaith conversations, and the June 20 panel was recorded on video for future use, said moderator Allison Duvall, EMM’s manager for church relations and engagement.

The refugee narrative is encoded in Jews’ spiritual DNA. They were forced to flee pogroms in Europe, withstood anti-Semitism and hatred across the globe and endured centuries of war and bloodshed. “We’ve been swept up as bystanders and brutalized as victims. We’ve been killed in our homelands … because of who we were, what we believed and what we practiced,” said Urecki, an immigrant whose grandparents and father were refugees.

Refugees are forced to flee because of who they are, what they believe and their religious practices, as another panelist confirmed. Anastasia Orlova is an asylum seeker from Russia. She arrived in the United States last October with her wife. Russia’s intolerance of LGBT people meant the couple kept few close friends, and Orlova would tell acquaintances she had a husband. She didn’t realize how depressed she was until she left Russia.

“When you are scared or ashamed of yourself, you live in inner isolation,” Orlova said. In the United States, Orlova and her wife can be married legally, practice their beliefs and speak up for themselves. “Here in the U.S. we finally feel protected.”

Refugees on the panel acknowledged that though they feel secure and free to be themselves in the United States, the country’s polarized politics and overarching economic and security fears are worrisome. The Trump administration has sought to suspend and reduce the U.S. Refugee Resettlement Program; as a result, EMM was forced to reduce its resettlement work.

“Maybe the stakes now are so high and the fear is so deep and the walls are so thick that the only way we can heal the soul of a nation is for a wider-than-ever circle of allies to gather around to stand with refugee and resettlement agencies,” said the Rev. Stephanie Spellers, canon to the presiding bishop for evangelism, reconciliation and creation. Spellers represented the Episcopal Church on the panel.

In Charleston, for example, West Virginia Interfaith Refugee Ministry operates, “in the heart of Trump country,” said Urecki. But if anything gives him hope, it’s that the people, even those who fear for their security and the economy, are open to conversation. “If you can get your foot in the door and have a conversation, you can win,” he said.

As the Episcopal Church’s refugee resettlement agency, EMM is one of nine agencies partnered with the U.S. State Department to welcome and resettle refugees; it operates 31 resettlement affiliates in 26 dioceses, providing direct assistance to recent arrivals. The Episcopal Church has worked to resettle refugees since the 1930s. The federal government formalized the U.S. Refugee Resettlement Program in 1980, partnering with religious and secular organizations to provide direct assistance to newly arrived refugees in communities nationwide. Six of the government’s resettlement partners are faith-based; the program has historically, for the most part, enjoyed bipartisan support. Over the last two years, however, Americans’ attitudes toward refugees have begun to shift from quiet acceptance to fear of the other.

Recently, EMM held a conference to train refugee supporters as advocates. EMM also offers ways for congregations to engage in refugee resettlement in their communities. The agency encourages Episcopalians to join the Episcopal Public Policy Network and advocate for policies that protect the rights of refugees and asylum seekers.

World Refugee Day is held annually on June 20; the day is set aside to commemorate the strength, courage and perseverance of millions of refugees. An unprecedented 65.6 million people have been forcibly displaced worldwide. Among them 22.5 million have received refugee status and less than 1 percent will be resettled. Over half of all refugees are younger than 18 years old. Many were born in refugee camps where the average stay is 20 years.

-Lynette Wilson is managing editor of the Episcopal News Service.