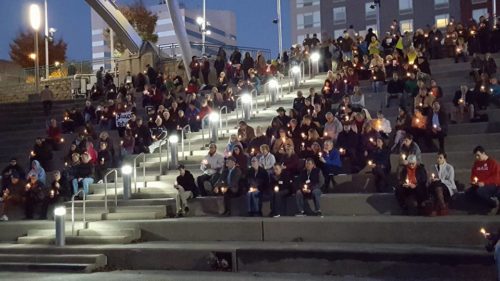 Hundreds of people gathered for an interfaith rally in support of Syrian refugees and refugee resettlement in Charleston, West Virginia, on Nov. 15. Photo: Victor Urecki/Facebook

“We believe [in], and we also want to encourage, the sense of welcome,” said West Virginia Assistant Bishop Mark Van Koevering, who attended the rally in Charleston. “It’s part of our Christian response to provide hospitality to the stranger. And the evidence suggests [that] where immigrants come into a community, it’s a win-win – they bring in skills and invigorate the dream about what America could be.

“We’ve all come from somewhere, and it’s important to distinguish between an immigrant and a refugee. These are people being forced from their homes and in dire straits.”

Hundreds of supporters joined the rally, which also attracted a dozen opponents, said Van Koevering, who recognized the opponents’ concerns about safety and the availability of resources to address other “big issues” in the state.

Refugee resettlement “is not an either/or,” however, he said. Floods killed more than 20 people and displaced more than a thousand in the state earlier this year, drug abuse is an epidemic problem, and the state has an aging population; problems the interfaith community also is trying to address.

Some of the speakers at the rally, including Rabbi Victor Urecki, of B’nai Jacob Synagogue, were refugees themselves.

“The rabbi gave his own story of being a child carried over from Europe and how much that dream of the U.S. has meant and the importance of keeping up that tradition of being a place of welcome,” said Van Koevering.

The Interfaith Refugee Ministry includes clergy and lay member volunteers from St. George Orthodox Cathedral, the local Islamic Association, Catholic Charities, which currently resettles refugees in Charleston, St. John’s Episcopal Church and others. Since the ministry’s inception, volunteers have met with state political leaders to advocate refugee resettlement in Charleston. (Click here for 10 facts about the U.S. refugee resettlement program; and here where three myths about the program are dispelled.)

“The efforts and skills that we have seen from the grass-roots volunteers at West Virginia Interfaith Refugee Ministry as they work to welcome refugees into their community are truly remarkable,” said the Rev. Mark Stevenson, director of Episcopal Migration Ministries. “Episcopal Migration Ministries considers it a gift to our ministry to be partnering with them to bring the victims of persecution to safety. They are demonstrating the welcoming nature of West Virginia to the country, and to the world.”

Just as West Virginia Interfaith Refugee Ministry is trying to get off the ground, the very existence of the U.S.- resettlement program hangs in the balance. President-elect Donald J. Trump and others in the Republican Party have indicated that refugees are no longer welcome, particularly Syrians and other refugees who come from countries beset by terrorist activity.

In West Virginia, the all-volunteer interfaith ministry has been working to build community unity in the wake of last week’s presidential election and a contentious election season.

“There has been some ugliness in the election and a lot of our members and volunteers are taking a strong stand for unity, tolerance and inclusiveness and love for one’s neighbor,” said Lynn Clarke, West Virginia Interfaith Refugee Ministry’s volunteer president and a member of St. John’s Episcopal Church in Charleston.

Episcopal Migration Ministries is one of nine agencies – more than half of them faith-based – that work in partnership with the State Department to welcome and resettle refugees. Its staff works with 30 resettlement affiliates in 26 dioceses and 22 states, providing direct assistance to recent arrivals. It also offers ways for congregations to engage in refugee resettlement in their communities and encourages Episcopalians to join the Episcopal Public Policy Network and advocate for policies that protect the rights of refugees and asylum seekers. Click here for the EPPN’s post-election resources for refugee and immigration advocacy.

Of the 21.3 million refugees in the world today, 1 percent might be resettled. In 2017, the United Nations High Commissioner for Refugees estimates that 1.19 million refugees will need to be resettled. A disproportionate number of refugees, 53 percent, are fleeing Somalia, Afghanistan and Syria, where more than four years of civil war has led to the death of more than 250,000 people and the displacement of 11 million.

“The interfaith efforts to welcome refugees to Charleston, West Virginia, is just one example of how communities across the United States are actively and vocally engaged in the work of resettlement,” said Lacy Broemel, the Episcopal Church’s refugee and immigration policy analyst based in Washington, D.C. “Communities have seen how refugees benefit their neighborhoods, schools, and local economy and are speaking out to share those experiences. Especially in the light of the global refugee crisis, the Episcopal Church is committed to continuing to welcome refugees and continuing our nation’s longstanding tradition of refugee resettlement under the next administration.”

The majority of Syrians continue to live in nearby Jordan, but many have been welcomed to Europe. The Obama administration pledged to welcome at least 10,000 Syrian refugees to the United States in fiscal year 2016, which ended Sept. 30. The Charleston Gazette-Mail reported that five Syrian refugees were resettled to West Virginia.

If the current numbers hold, next year up to 110,000 refugees could be resettled to the United States.