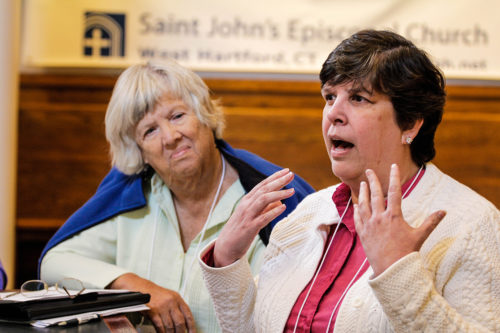 Wendy Grace, diocesan liaison for refugees in the Diocese of Vermont, plays the role of a Colombian refugee during a mock meeting with a Congressional aide, while Lynn Zender, chair of the Diocese of Northern California’s immigration and refugee ministries group, looks on. Photo: Lynette Wilson/Episcopal News Service

[Episcopal News Service – Hartford, Connecticut] A year ago, the Episcopal Migration Ministries was worried about how it might rally the Church to assist in the resettlement of an additional 25,000 refugees in the fiscal year 2017. Now, EMM and other resettlement agencies are struggling for existence in an increasingly polarized environment dominated by fear, misinformation and misunderstanding. 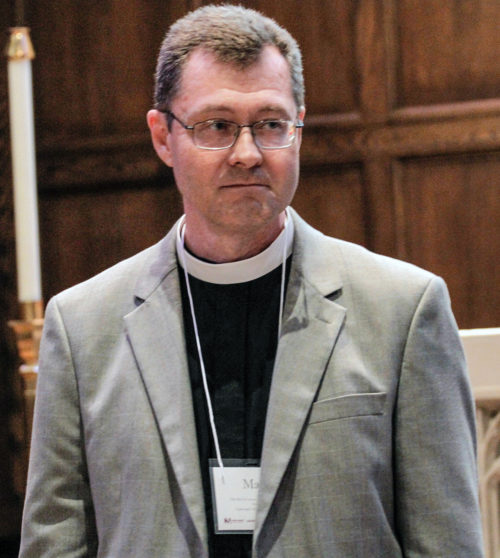 “A year ago, the primary concern we had was how were we going to move from 85,000 refugees to 110,000 … and our thinking was then that if we don’t have advocacy, if we don’t have people to start embracing this very important ministry, we’re never going to be able to resettle 110 or more thousand refugees,” said the Rev. E. Mark Stevenson, EMM’s director.

“Our advocacy now is to simply educate people so that they can filter out the nonsense that they see and hear so much in the news media. Refugees are fleeing the same kinds of problems that we want to stop in our own national security. They are folks who have been attacked and we’re afraid of being attacked.”

Advocacy and storytelling that humanizes the refugee experience are two ways Episcopalians and others can correct the false, fear-based narrative that currently characterizes refugees. With that goal in mind, EMM hosted a three-day training here June 5-7 training to empower Episcopalians to be agents of reconciliation as allies, advocates and ambassadors for their refugee neighbors.

“We had this idea and wrote this program based on relationships we’ve built with dioceses and individuals — priests and deacons and lay people — over the last several years. People who are very eager to come together to not only network and meet and understand how they are doing refugee ministry in their own context, but also learn skills, especially now, to change public perception and to truly change hearts and minds in a time when refugees are deeply misunderstood,” said Allison Duvall, co-sponsorship and church relations program manager for EMM.

The Episcopal Church has resettled refugees in the United States since the 1930s. EMM is one of nine agencies partnered with the U.S. State Department to welcome and resettle refugees. EMM operates 31 resettlement affiliates in 26 dioceses, providing direct assistance to recent arrivals. EMM has resettled 3,404 refugees this fiscal year, which began in October 2016. The previous year, EMM resettled 5,761 refugees. 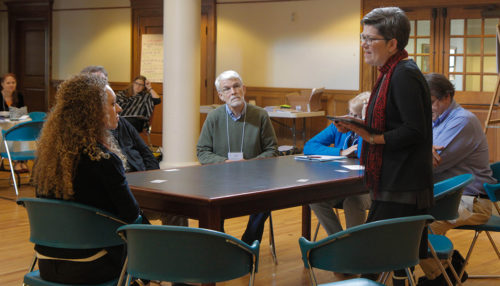 The Rev. Twila Smith, who serves two parishes in the Diocese of Bethlehem and coordinates a refugee community center, standing right, and the Rev. Michael Coburn, priest-in-charge of the Chruch of the Ascension, Cranston, Rhode Island, seated across the table, and others take part in a mock meeting with a Congressional aide, played here by Allison Duvall, co-sponsorship and church relations program manager for Episcopal Migration Ministries, during the June 5-7 “Love God, Love Neighbor,” refugee advocacy training. Photo: Lynette Wilson/Episcopal News Service

Funded by a Constable Fund grant, the training was the pilot in a series of advocacy trainings scheduled over the next 12 months. 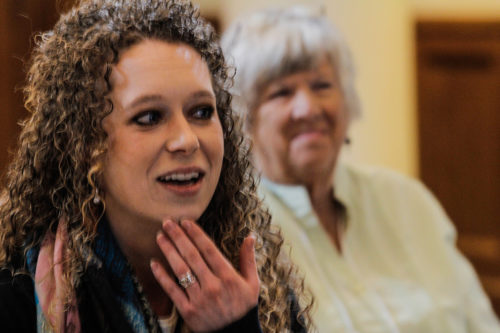 “They [the governing bodies] recognized the fact that truly effective ministry is done at the grassroots level and the goal of this program is to give people at the grassroots level the tools they need to advocate on behalf of refugees … this is a fantastic example of how a governing body can put into action a process that actually does hit at on-the-ground ministry.”

The Constable Fund provides support for Christian formation initiatives across the Episcopal Church that are not included in the Church’s budget. EMM plans to hold two to three additional refugee advocacy trainings before the 2018 General Convention; and, to make advocacy training a permanent part of its ministry.

For Amanda Payne, a youth minister in the Diocese of Dallas who works with refugees at St. James Episcopal Church, learning about the intensive security screenings refugees face before they’re cleared for resettlement in a session called “Refugee 101” was new information that will help her in her advocacy efforts, she said. The Rev. Paula Ott, a deacon at Christ Church Cathedral in Lexington, Kentucky, and the daughter of a Syrian Jew who came to the United States as a refugee in the 1920s, said learning storytelling skills to personalize refugees’ experiences is just one advocacy tool she plans to use as she intensifies her advocacy efforts.

Besides Refugee 101, other education and training sessions included storytelling techniques to reframe the narrative; the principles of Asset Based Community Development; and context, strategies and actionable tools for advocacy. 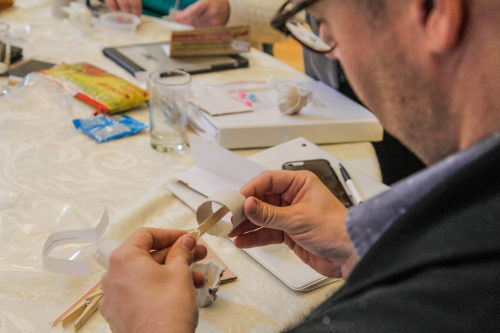 The Rev. Sean Lanigan serves as associate rector of St. Peter’s Church in Philadelphia, Pennsylvania, a church that works with a local refugee resettlement agency to co-sponsor a family of Bhutanese refugees. For him, the conference reinforced the message that storytelling needs to include not just the refugees’ stories, but stories about how co-sponsorship changes church volunteers and congregations.

“Advocacy absolutely must be a component especially when you are talking about refugee resettlement,” said Lacy Broemel, the Episcopal Church’s refugee and immigration policy analyst. Congress approves the funding and the president annually determines the number of refugees to be resettled. “If you want refugees in your community, you have to talk to them [elected officials]. You don’t have to be an expert to be a good messenger, you don’t have to have worked in refugee resettlement for 45 years as a case manager to know, to see someone’s humanity to know that this program is good and right and beneficial.”

The Episcopal Church is non-partisan, but Episcopalians do engage in politics at the local, national and international level from a Christian values-based approach.

The advocacy training comes at a critical time. Since its formalization in 1980, the U.S. Refugee Resettlement Program has, for the most part, enjoyed bipartisan and widespread public support. Additionally, the United States historically has led the world in welcoming large numbers of refugees fleeing violence and persecution. In 2015, however, Americans’ acceptance and attitude toward refugees began to change from one of mostly quiet acceptance to fear. 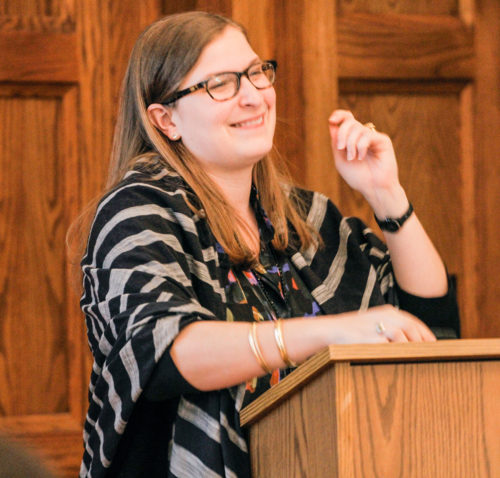 Two things happened, explained Broemel during a June 7 session she led on the prophetic ministry of advocacy.

First, in early September of that year, a photograph a drowned, 3-year-old Syrian boy washed up on a beach on Turkey’s southwest coast, went viral and initiated a worldwide outpouring of support for Syrian refugees fleeing the country’s ongoing civil war. Alan Kurdi, his older brother and his mother, when the crowded dingy they’d boarded to travel from Turkey to Greece capsized minutes into their journey.

Then, two and a half months later, on Nov. 13, 2015, terror attacks killed 130 people and wounded hundreds more in six locations across Paris, France. Immediately following the attacks, the media erroneously reported that one of the attackers was a Syrian refugee, when in fact the attackers were Belgian and French nationals. Regardless of the attackers’ identity, fear, nationalism and massive influx of refugees fleeing Syria and other crisis zones arriving in Europe began to turn public opinion against refugees in Western Europe and the United States.

After the Paris attacks, the rhetoric of anti-refugee fringe groups became mainstream, fear flourished and refugee resettlement became a polarizing political issue exacerbated by misreporting and misunderstanding of the resettlement process, said Broemel.

Earlier this year, when President Donald Trump took office, one of his first acts as president was to sign an executive order suspending the U.S. resettlement program. A federal court stayed the order, which is likely to end up in front of the Supreme Court later this year. The order also reduced by more than half the number of refugee admissions this fiscal year; an action that has forced Episcopal Migration Ministries to reduce the size of its affiliate network.

Episcopal Migration Ministries is a partner in the June 12-16 Stand With Refugees national campaign.