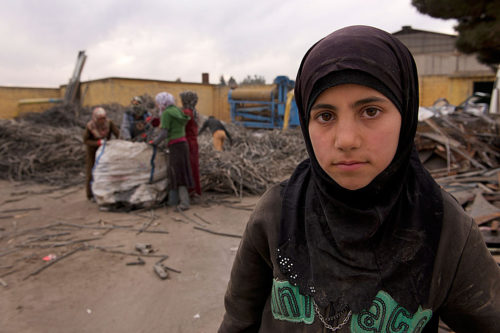 Although she used to be in grade six, Ayesh, who fled to Turkey from the Idlib Governorate of Syria does not attend school. Photo: UNICEF/Shehzad Noorani

[Episcopal News Service] Episcopal Migration Ministries will reduce the size of its 31-member affiliate network by six in 2018 because of changing U.S. policy that will reduce the number of refugees to be resettled in this country annually by more than half.

The affiliates, and the Episcopal dioceses in which they are located, are:

The planned closings are a painful but strategically necessary move, the Rev. Canon E. Mark Stevenson, EMM’s director, told Episcopal News Service. Moreover, they come after two other recent decisions to shrink EMM’s footprint, one directly related to the government’s changing refugee policy and one not.

“It’s painful; it’s horrible, but we hope – we pray – that we have made the right decisions for the health of the overall network and for the well-being of the refugees,” he said. “That is our number one concern.”

Following President Donald Trump’s executive orders on immigration that reduce the number of refugees able to be annually resettled in the country by more than half, the U.S. Department of State has issued guidance to the resettlement agencies to plan for no more than 50,000 refugee admissions in the coming fiscal year. The most recent of Trump’s two orders is here.

Stevenson said EMM and the other eight resettlement agencies that work under U.S. federal contracts to resettle refugees “are looking at structuring ourselves to be the right size for fiscal year 2018.”

The other resettlement agencies are Church World Service, Ethiopian Community Development Council, HIAS (formerly known as the Hebrew Immigrant Aid Society), International Rescue Committee, Lutheran Immigration and Refugee Service, U.S. Committee for Refugees and Immigrants, the U.S. Conference of Catholic Bishops’ Migration and Refugee Services and World Relief. (By federal law, refugees may only enter the U.S. under the auspices of one of those agencies.)

“We’re also looking at how we structure ourselves to stay healthy during the remainder of this year because much of the funding that comes from the federal government is calculated on the number of refugees coming to the United States,” he said.

Thus, when refugees cannot enter the U.S., resettlement agencies such as EMM receive far less federal money than anticipated. That reduction also makes it harder to provide ongoing services to refugees already resettled in the U.S.

Administrators at all nine agencies have been forced to make choices that will preserve the integrity of the network of agencies and affiliates in a way that is the best for refugees.

“It’s important for us to have a system where refugees are resettled where it is safe, where it’s affordable, where opportunity is given to them to thrive as new Americans,” Stevenson said.

With those concerns in mind, he said, each agency has been making choices based on where it operates now, where it operates in partnership with other agencies and where, given the anticipated nationalities of future refugees, former refugees have formed communities that can support newcomers.

“We don’t want to leave a community completely in the lurch,” Stevenson said. 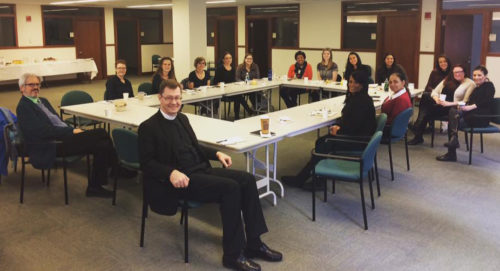 The Rev. Canon E. Mark Stevenson and the national staff of Episcopal Migration Ministries met for a retreat at the Episcopal Church Center in New York as EMM and the eight other resettlement agencies in the United States were facing cuts due to changing U.S. policy on refugee admissions. Photo: EMM via Facebook

An unsettling time for refugee resettlement

The past seven and a half weeks have been a difficult and unpredictable for the nine resettlement agencies.

On Jan. 27,  Trump’s initial executive order suspended the entry of refugees into the United States for at least 120 days. The order also said that when the administration lifts the ban, there would be further restrictions on potential refugees from seven Muslim-majority countries. Furthermore, Trump said that, after the ban ends, he would allow only 50,000 refugees into the United States instead of the anticipated 110,000 this fiscal year. By federal law, the president makes an annual determination of the maximum number of refugees that will be allowed to resettle in the United States. All nine agencies had geared up with people and offices to resettle the larger number of refugees.

U.S. District Judge James Robart in Seattle on Feb. 6 temporarily blocked Trump’s action, leaving the State Department’s refugee admissions program in limbo. Trump issued his second executive order March 6, removing Iraq from the list of seven countries and rewording his first order in an attempt to avoid new allegations that it violates the U.S. Constitution’s religious freedom guarantee. The new order maintains the reduction in the number of refugees who can enter the U.S. after that work resumes.

The March 6 order is on hold while federal district court judges consider challenges to it. On March 29, U.S. District Judge Derrick Watson in Hawaii issued a longer-lasting hold on the order. Watson had earlier imposed a temporary restraining order. The ruling is in effect until Watson orders otherwise, including during an appeal, which the Trump administration filed the next day.

The government has also appealed the ruling of a federal judge in Maryland that blocked the order. And Robart, the federal district judge in Washington, has not yet ruled on challenges to the second order. 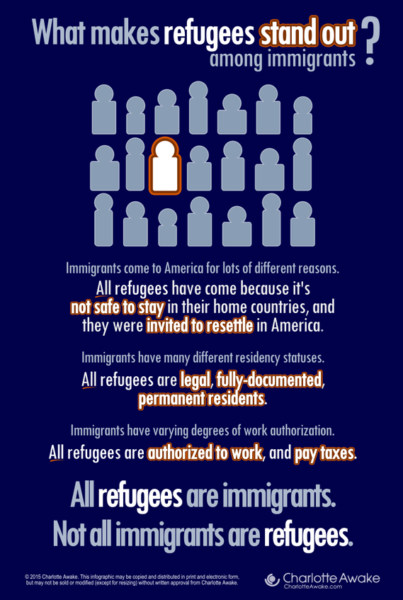 The term “refugee” has a specific legal meaning. The United Nations High Commissioner for Refugees designates a person as a “refugee” if they are fleeing persecution, war or violence. Those people apply for that designation and are regarded as distinct from immigrants. They earn refugee designation after UNHCR vets their application. Episcopal Migration Ministries resettles refugees who have received the U.N. designation, been referred by the U.N. to the United States and have gone through a U.S. vetting process.

The executive order’s impact on EMM’s bottom line is especially drastic because EMM is a unique ministry of the Episcopal Church, both structurally and fiscally. While not separately incorporated, as is Episcopal Relief & Development, EMM receives very little money from the church-wide budget, instead receiving 99.5 percent of its funding from the federal government. Its main office is housed at the Episcopal Church Center in New York.

Stevenson has said that 90 percent of the contract money directly goes to resettling refugees. EMM retains about $2 million for administrative costs, including all national staff salaries. Any unused money goes back to the government.

The affiliates receive money via EMM from the federal contracts and thus face big budget cuts when no refugees enter the country. EMM’s network is a mixture of three types of affiliates. Two are essentially EMM branch offices. The rest are independent operations that work only with EMM or with EMM and Church World Service and/or Lutheran Immigration and Refugee Service.

Affiliates are using cash reserves, fundraising and whatever support EMM can give them to pay their employees and cover leases and other operating expenses. The Church’s Executive Council agreed in February to give EMM $500,000 to help it through 2017. The agency itself recently announced a fundraising campaign to bridge the funding gap.

In fiscal year 2016, which ran from Oct. 1, 2015, to Sept. 30, 2016, EMM resettled 5,762 refugees to the United States from 35 countries, including the Democratic Republic of Congo, Burma, Afghanistan and Syria. Already this fiscal year, EMM welcomed 2,766 refugees and anticipated resettling 6,175 people until Trump signed his order Jan. 27. Overall, all nine agencies have already resettled approximately 38,000 refugees this fiscal year, Stevenson said.

Since the Trump administration’s policy shift, EMM has reduced its national core staff by 22 percent due to the reduced federal funding. It announced in late February that it would close its more than 30-year-old Miami office, not because of the Trump administration’s moves but because of changes made by former President Barack Obama to U.S. policy on Cuban migrants.

Reducing the affiliate network by six and closing the Miami office equals a 23 percent reduction in the network, Stevenson said. “We are hopeful that will be sufficient,” he added.

Some of the other nine resettlement agencies have already announced their decisions. World Relief said in mid-February that it would lay off more than 140 staff members and close offices in Boise, Idaho; Columbus, Ohio; Miami; Nashville, Tennessee, and Glen Burnie, Maryland.

The other reality, Stevenson said, is that the reduced number of refugees and the decisions the agencies have to make will hurt the economies in the affiliates’ cities. Landlords who rent to refugees, employers who hire them and the language teachers, medical personnel, school employees who help them integrate into U.S. society will lose money or jobs, Stevenson predicted.

“We’re making the best strategic decisions that we can every day based on the information we have in front of us,” he said. “So, given the information that we have now and the assumptions that we’re all working across all nine resettlement agencies, we believe that that adjustment in our network size will properly position us to be a healthy network for resettling refugees come the end of a suspension and into fiscal 2018.”

Meanwhile, Episcopal Church Director of Government Relations Rebecca Linder Blachly told ENS that her office would continue to help those in the administration who will decide if the ban can be lifted after 120 days “be confident that we have a good process in place” for resettling refugees.

The official press release concerning the reduction is here.