Esther Powell, left, and Dawn Tesorero hold a banner of the Diocese of Massachusetts’ Episcopalians Caring for Creation during the Peoples Climate March on April 29 in Washington, D.C. Photo: The Rev. Margaret Bullitt-Jonas

[Episcopal News Service] Episcopalians from across the United States joined tens of thousands of people on April 29 for the Peoples Climate March in Washington, D.C., and for hundreds of sister marches in cities around the world.

Braving sweltering heat in the nation’s capital, marchers rallied for action against climate change amid fear that the White House will reverse progress made on the issue under former President Barack Obama. Episcopalians were part of a large, diverse faith-based group of marchers who saw it as their role to make the moral case for protecting God’s creation.

“What really impressed me … was the incredible passion of the people, of all ages,” said McKelden Smith, who helped Church of the Heavenly Rest in New York City organize a bus trip to Washington to participate in the march. “It felt like an unstoppable moral force in the streets, and that was very moving to me.”

The climate march came one week after the March for Science, which followed the Native Nation’s Rise march, the Women’s March and other prominent marches and demonstrations joined by Episcopalians over the last nine months. 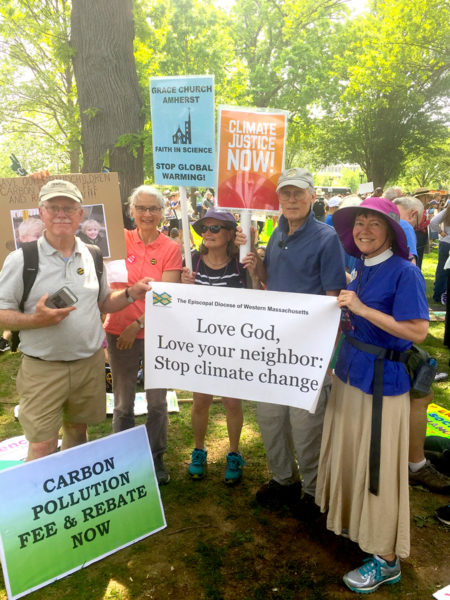 A group from Grace Church in Amherst, Massachusetts, participated in the April 29 Peoples Climate March. From left, Chris and DeAnne Riddle, Lucy and John Robinson and the Rev. Margaret Bullitt-Jonas. Photo courtesy of Bullitt-Jonas.

On April 29, many Episcopalians who participated in the march joined Keepers of Faith, one of several subsets of marchers as grouped by the march’s organizers. Among Keepers of Faith were Buddhists, Muslims, Jews and Christians of all stripes, said Shantha Ready Alonso, executive director of Creative Justice Ministries.

Alonso’s organization works with 38 Christian denominations, including the Episcopal Church, to provide resources and guidance for activism on environmental justice issues. The number of Christians who lent their “moral voice” to the Saturday’s march was overwhelming and inspiring, she said.

“That was extremely heartening to see how many people were willing to pray with their feet and put their bodies on the line in 91-degree weather to show that we care,” Alonso said, adding that she expects parishioners and congregations to turn this energy into action back in their home communities.

The sense of urgency is high among activists. As President Donald Trump was taking the oath of office in January, references to “climate change” and “global warming” disappeared from the White House website. Trump has threatened to withdraw the United States from the Paris Agreement. He appointed Scott Pruitt, a climate change denier, to head the Environmental Protection Agency, an agency gutted in his proposed budget. Trump has made it easier for oil companies to drill in national parks. On April 25, Trump signed an executive order that could open national monuments to drilling, mining and logging.

The effects of climate change can be seen across the United State from droughts in the Southwest to loss of land to sea-level rise along the Gulf Coast to wildfires in the Northwest and the Rockies to an increase in the occurrence and severity of hurricanes on the East Coast.

Church World Service held a vigil April 29 at the United Methodist Building across from Capitol Hill before the start of the march. Among the speakers was Episcopal Diocese of California Bishop Marc Andrus, who in December 2015 was part of a delegation that represented the presiding bishop and the church in Paris at the UN Framework Convention on Climate Change, known as COP21. It was at COP21 where 196 parties created the agreement that sets out to decrease carbon emissions and limit global warming to 2 degrees Celsius.

Andrus also had participated in the previous Peoples Climate March, held in 2014 in New York City. At this year’s march, “there was a similar spirit of a lot of hope and positive energy. I felt a lot of determination and resolute spirit from the enormous crowds.” 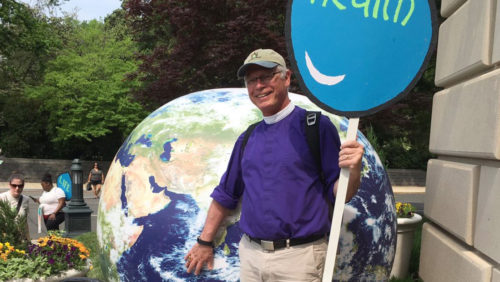 Diocese of California Bishop Marc Andrus was among the Episcopalians who participated April 29 in the Peoples Climate March in Washington, D.C. Andrus also spoke at a Church World Service vigil before the march. Photo courtesy of Marc Andrus, via Twitter.

At the Church World Service vigil, Andrus identified three important reasons the Episcopal Church will be at the forefront of movement toward a solution to climate change. First, it is part of a world body, the Anglican Communion, and therefore “poised to be in a position, along with partners, to uniquely address the world’s climate change.” The Episcopal Church General Convention also has identified environmental justice as one of the church’s three primary issues in the current triennium. That emphasis can be seen in the EcoJustice Weekend his diocese is hosting on May 19 and 20 with Presiding Bishop Michael Curry’s participation.

And Andrus noted that, if the Trump administration withdraws from the Paris Agreement, many of the agreement’s goals still could be met through the work of “subnational” bodies, from cities to churches, and the Episcopal Church likely would be deeply involved in such efforts.

Individual Episcopalians can make a difference, too, not just by participating in marches but by advocating policy changes, said Jayce Hafner, the Episcopal Church’s domestic policy analyst in the Washington, D.C.-based Office of Government Relations.

“It’s incredibly inspiring to see so many Episcopalians engaged in the Peoples Climate Marches across the United States. We Episcopalians represent a critical perspective in this climate effort through highlighting the intersections of poverty and the environment and bringing new partners to the table,” Hafner said.

“While marching is important, it is only the beginning of how we – as Episcopalians – can mitigate climate change. Our next step should be undertaking robust policy advocacy at local and national levels and calling on our elected leaders to pass climate change legislation,” she added.

The Office of Government Relations represents the policy priorities of the Episcopal Church to the U.S. government. It also represents the Church as a leader in ecumenical, interfaith and secular coalitions dedicated to mitigating climate change and addressing poverty and environmental justice issues in the United States. It is a member of Creation Justice Ministries, the US Climate Action Network, and the We Are the Arctic campaign. It also co-organizes the Presiding Bishop’s annual delegations to the United Nations climate negotiations. The office also provides Episcopalians with advocacy tools.

“I strongly encourage Episcopalians to sign up for the Episcopal Public Policy Network to receive regular alerts on key advocacy opportunities and educational resources that equip congregations to raise their voices to lawmakers. This way, action in the streets can be supported and supplemented by critical conversation and relationship building with decision-makers – we need demonstration and dialogue to move the needle, and as Episcopalians, we’re well-equipped to undertake both,” said Hafner.

– Lynette Wilson is managing editor of Episcopal News Service. David Paulsen is an editor and reporter for the news service.