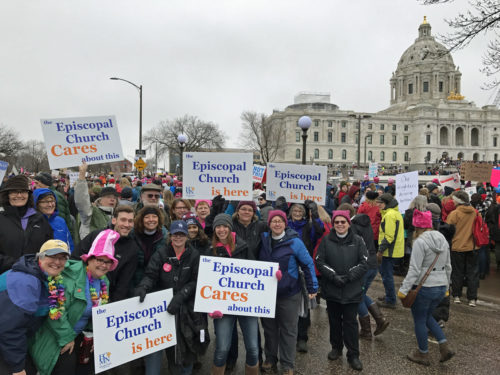 Minnesota Episcopalians made their presence known at one of approximately 600 “Sister Marches” Jan. 21 outside the state capitol in St. Paul. Photo: LeeAnne Watkins

[Episcopal News Service] Carrying signs reading “The Episcopal Church is Here” and “The Episcopal Church Cares About This,” the Rev. LeeAnne Watkins and other Minnesota Episcopalians joined thousands of marchers in St. Paul on Jan. 21, sparking “a miserable day of puddles and ice” into the beginnings of a movement.

A day later, Watkins was already heeding the Women’s March movement’s call to continue post-march local action. With the help of a professional facilitator and theater troupe, St. Mary’s Episcopal Church in St. Paul hosted a Jan. 22 intergenerational forum. It included roleplaying aimed at “elders teaching young people about what it means to respect women,” said Watkins, 50, rector for 18 years.

As elsewhere, the numbers of marchers exploded expectations. In St. Paul, for example, Watkins said that while organizers had planned for about 20,000, police estimated the crowd at about 100,000.

“It was joyful and peaceful and fun,” she said. “There were hugs as people recognized one another. There were workplace groups and a lot of young people, people in wheelchairs.

“I went because it was about marching for women … the rights of women and girls, about reproductive freedom, about immigrants in our state, about dignity for all people. It wasn’t an anti-march. It was a pro-march for all the values I hold that are informed by my faith.” 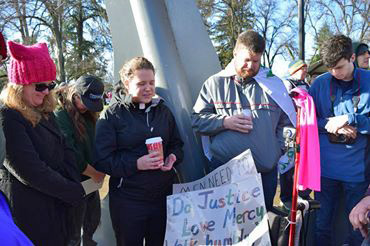 The Rev. Sarah Quinney leads church members, including the Rev. Anne Smith (left) and Myles Clarke (right), in a prayer for peace before the start of the Women’s March on Sacramento, California. Photo: Paula Schaap

From New York to Sacramento to Washington, D.C., Episcopalians joined in spirit-filled marches. Organizers said some 600 “Sister Marches” drew scores of participants across the globe. An estimated more than one million women, men and children, some wearing knitted pink caps with cat ears — the unofficial symbol of the march — took to streets in the nation’s capital and elsewhere, chanting, singing, bearing messages of hope and peace.

Editor’s note: A photo gallery from marches across the United States is here.

Trinity Wall Street in New York sent to the nation’s capital two busloads of “all ages, kids, teenagers, adults … it was amazing, so many more people than anybody expected. It was just tremendous and the spirit was kind and fired-up and really wanting to connect with other people,” said Ruth Frey, Trinity’s senior program officer for social justice and reconciliation.

Frey said joining the march was important both professionally and personally for her. “I talked to enough people to know, it’s been a very bleak season,” she told ENS. “But this was a time of hope and light in that bleak season, and there were people of all sorts there, who care about a variety of different issues. But all feel somehow that the administration that has just come in is not open to protecting or advancing everybody’s rights.”

Personally, she said, the march leads directly to the Baptismal Covenant promise “to work for justice and peace and respect the dignity of every human being. That language has been far from the rhetoric that our new president has been using.”

But Frey said that didn’t matter. What mattered was the moment, the movement, the Spirit’s presence, the messages chanted by the crowd, including: “This is what democracy looks like” and “We are the popular vote” and “We need a leader, not a creepy Tweeter.”

The Very Rev. Michael T. Sniffen, dean of the Diocese of Long Island’s Cathedral of the Incarnation, speaking via telephone as he marched along Pennsylvania Avenue, approaching the White House: “There is a passionate sense of being here to demonstrate the democratic values that we pray will endure in this nation.”

Sniffen, whose cathedral group traveled with Trinity Wall Street to Washington, said he met marchers from other faith traditions.

“It is wonderful to meet people who are all working for justice for all people and respect for the dignity of every human being,” he said. “It’s a wonderful day for the church, to see this many people gathered today, reminding us that all the freedoms we enjoy that God has given us are only ours when we fight for them.

“By God’s grace, we will have the passion and courage and energy to try and continue that struggle.” 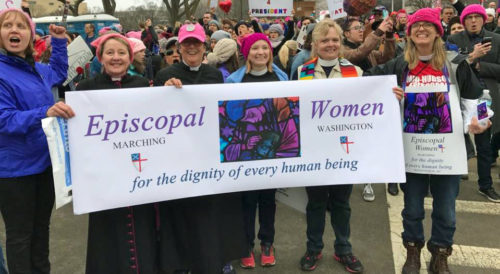 Silver Spring, Maryland, resident Spencer Cantrell, 28, attends St. Thomas Parish Episcopal Church, Dupont Circle, in Washington, D.C., and works with survivors of domestic violence. She called the march “a powerful moment” and said it was important to be there “to make our voices heard.”

“There’s already word coming out that Trump might take away some funding for violence against women or the arts, and he’s already changing health care,” she said.

“I work with survivors of violence and it’s important to let them know they’re supported and to continue to reach out to our representatives and let them know how we feel.” Also important, she said, is to stay connected with the work of the Episcopal Public Policy Network and the Episcopal Church Office of Government Relations.

Michelle Cox, a member of Trinity Church, New Orleans, said she’s accustomed to Mardi Gras crowds, but felt amazed at the positive energy, the outpouring of support and kindness to strangers of the massive numbers of people who poured into the nation’s capital.

She was also awed by hearing Gloria Steinem and even Madonna, whose salty language prompted apologies from news outlets broadcasting the march.

“It was just pretty fantastic,” said Cox, a stay-at-home mom of two daughters, aged 9 and 12. “I don’t even know the last time I’ve had a day when you don’t encounter some form of negativity. There was none; it was remarkable.”

Cox called Madonna’s language “unfortunate,” but added, “I think of that as her standard shock value. She had to find some way to be shocking and language was what she chose. Still, it was wonderful to have her there.” 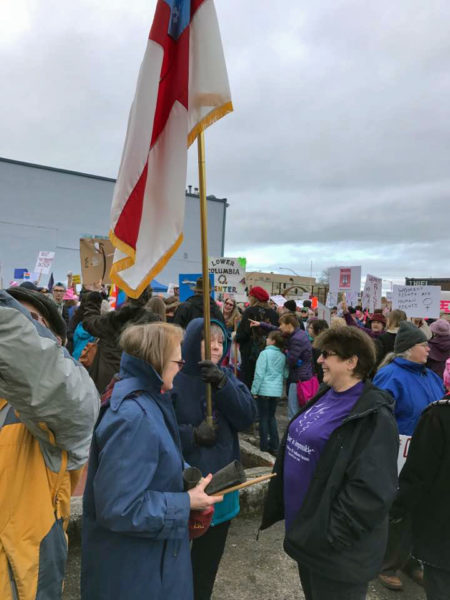 One speaker in particular, Sophie Cruz, a young immigrant rights activist, brought her to tears. “She talked about coming together and the openness of the world and love, and it was just an absolute message of love. Truly, from the mouths of babes.”

Cox said she joined the march because “I don’t recall an election where I had felt such a disconnect with what I thought was going to happen and what did happen and it really affected me, and my good friends.

“We felt that women in particular were disenfranchised with the way the election occurred. Women were being disparaged greatly and it was surprising to me that my country elected someone I found so out of step with the way I think we should respect all people. I was looking for a way to deal with that.”

She looks forward to following organizers’ “Ten Things to Do in the First Hundred Days” after the march, like sending out press cards to congressional leaders.

Her group wore purple hats, she said, because purple is a blend of red and blue. “You can’t go forward if you are only red or blue. We have to come together and that was the true spirit of the day.”

Sarah Steffner, 44, lives in Chattanooga, Tennessee but flew to Washington, D.C., with some friends and met up with others at the march, mostly fellow alums from Sewanee, the University of the South.

She joined marchers because of “our president’s very clear attitude of disrespect, and the words he uses, rating women. She hopes it will be an eventual life lesson for her children, aged 8 and 11, about how to treat other people who are different than you or whose needs differ from yours. “It was important to me to show my children that there’s a line … and that these are not OK things for anyone to say, even if he is elected president of the United States.”

The march also was a place of connection, Steffner said. She recalled contacting her senator’s office to advocate for gun control “and the woman who answered the phone actually laughed at me.

“I felt personally so discouraged that my representatives at a state and federal level just don’t care,” she said. “But, what this (the march) showed me is that, I can’t let that feeling win.

“I have to keep voicing my beliefs and stay active and keep going to protests and showing up for things and saying I know I live in a state where 70 percent of the people don’t agree with me, but that does not make me invalid.” 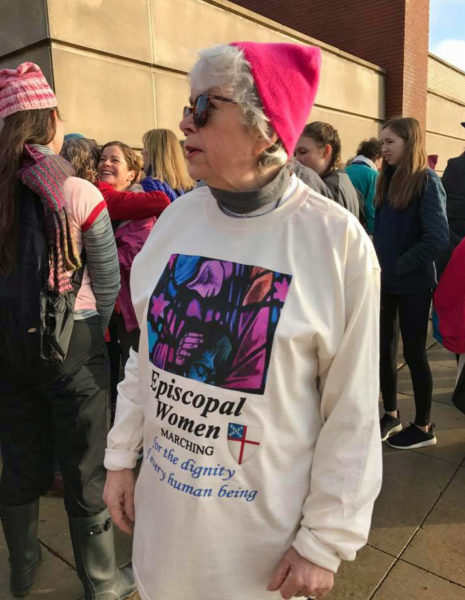 Victoria Lynn Garvey, a lay leader in the Diocese of Chicago area and former member of the Episcopal Church’s Executive Council, gets ready for the rally in downtown Chicago. Photo: Shawn Shreiner via Facebook

In Chicago, St. Paul and the Redeemer parishioner Antoinette Daniels said the expected march attendance of 50,000 swelled to 250,000 and instead of marching, participants rallied in place.

“I was marching for civility, respect and courtesy among humanity,” Daniels blogged. “I think we’ve ventured away from those values since last November.”

In Sacramento, California, marchers chanted: “Love, not hate, that’s what makes America great” and the Rev. Betsey Monnot, co-rector of All Saints Episcopal Church said the march was about “the power of community.”

“There are people here exercising their First Amendment rights to say they’re not happy with the direction things appear to be going, and I want the Episcopal Church to be part of that.”

Steffner, from Chattanooga, said attending the march has moved her, as organizers suggested, to translate her excitement to local opportunities. She plans to join the American Civil Liberties Union and to advocate for gun laws.

“One of the big things I’ve learned from this is what a rapid response is,” she said. “When you learn about a bill you don’t have six months to call and make a statement. I want to join those rapid responders and show up when I can and make my voice heard even when I feel like no one is listening.”

–The Rev. Pat McCaughan is a correspondent for the Episcopal News Service. Paula Schapp, communications officer for the Diocese of Northern California, contributed to this report.