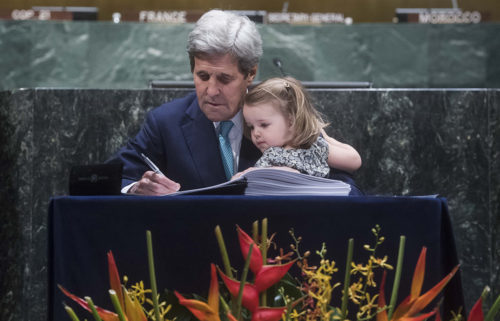 U.S. Secretary of State John Kerry, with granddaughter in tow, signs the Paris Agreement on April 22. Kerry was among 175 world leaders who signed the historic climate agreement in a ceremony coinciding with the 46th annual Earth Day. Photo: United Nations

[Episcopal News Service] Among the hundreds of people present at the United Nations headquarters in New York on April 22 for the historic signing of the world’s first ever comprehensive agreement on climate change, California Bishop Marc Andrus stood out as the only visible religious leader, dressed in a purple clerical shirt and a collar.

“I was there as a witness,” said Andrus, adding that he could not identify other “overtly” religious people in the crowd and that no one was singled out as representing the faith community. “I was the only one, and there where hundreds and hundreds of people, and so I’m so grateful for that. Then I was met with gratitude, people saying ‘I’m so happy that the church is here.’

“I was very careful to step forward saying I’m here to represent the Episcopal Church and Presiding Bishop Michael Curry, and honored to be here partnering with you and we are looking for ways to support this work,” he said during an April 23 interview back in California with Episcopal News Service. Andrus spoke after an EcoConfirmation service, where participants upheld their baptismal vow to “cherish the wondrous works of God, and protect the beauty and integrity of all creation.” 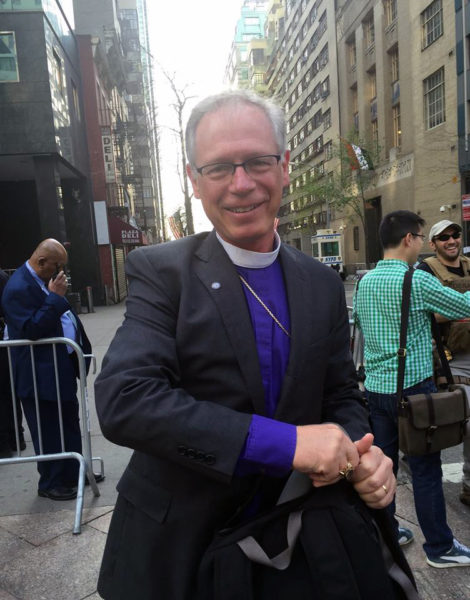 Andrus, a longtime environmental advocate, represented Curry and the Episcopal Church at the Earth Day signing of the Paris Agreement at the invitation of U.N. Secretary General Ban Ki-moon. He also joined an Episcopal delegation in December that represented the presiding bishop and the church at the UN Framework Convention on Climate Change, known as COP21, where 196 parties created the agreement that sets out to decrease carbon emissions and limit global warming to 2 degrees Celsius.

“At the COP21 we made a commitment to the Earth and this has never happened in human history, essentially for all the countries of the Earth to say that they’ve committed to its welfare,” said Andrus, adding the nations would not have done so without the “groundswell of people behind them.”

The Paris Agreement represents the first binding, international treaty in 20 years of United Nations climate talks. The April 22 signing by 175 world leaders – representing the largest number of countries to ever sign an international agreement in a single day – is the next step toward individual nations adopting the agreement and it becoming international law.

“Bishop Marc’s attendance at the Signature Ceremony for the Paris Agreement on Climate Change spoke volumes. It declared to governments, the United Nations and civil society that the Episcopal Church was there with them, visibly present and supportive as a faith-based partner at this historic event,” said Lynnaia Main, global relations officer for the Episcopal Church and its liaison to the United Nations.

“Just as Episcopalians prayed and encouraged the negotiators at COP21 as they forged the agreement, Bishop Marc’s presence demonstrated that our church continued to walk in faith alongside governments and civil society at the agreement’s actual signing. This sets the stage for our partnership in the next phase, implementation of the agreement at the national level. We will need to encourage our national leaders and put faith into action in our churches and dioceses. We thank Bishop Marc for faithfully representing our church at the United Nations,” Main said.

Episcopalians joined climate activists and advocates and nongovernment organizations in calling for a strong agreement to reduce global greenhouse gas emissions at the climate talks in Paris.

“Faith organizations from around the world, including the Episcopal Church, pushed hard for a strong climate agreement at the COP21 last December,” said Jayce Hafner, the Episcopal Church’s domestic policy analyst who works in the church’s Washington, D.C.-based Office of Government Relations.

“The agreement that emerged in Paris was an exciting first step toward curbing international carbon emissions, yet there is still much work to be done to effectively stave off the worst impacts of climate change. Now that we have a robust international coalition of support to address our changing climate, we all need to ambitiously ramp up our domestic efforts to reduce greenhouse gas emissions, and the Episcopal Church has an important role to play,” she said.

For example, congregations can improve energy efficiency within their parishes and source their energy from the renewable sector; parishioners can advocate for state and local policies that promote clean energy and sustainable, local agriculture; and Sunday school teachers can take the kids outside and help them to experience the joy of connecting with nature, Hafner said.

“We can all work to support, strengthen, and implement the Paris Agreement.”

The agreement says that it will be fulfilled at the subnational level by subnational entities, said Andrus. He cited the city of Stockholm and the state of California, as two good examples of places that are far along the path of becoming carbon neutral.

“The Paris agreement is really about carbon, and that’s really about a complete life change,” he said, referencing the words of Morocco’s minister of the environment who spoke during the April 22 signing about a new civilization based on interconnectedness, and those of climate activist and actor Leonardo DiCaprio, who spoke about climate change as the “defining crisis of our time,” and the need to leave fossil fuels in the ground to save the planet.

“The goal is total revolution in the way we live our lives,” said Andrus, adding that many Episcopal churches are on the way. “Everything that we are doing to build vibrant local economies – like when we host farmers markets, when we make choices like buying fair trade organic coffee, when we source things locally, when we replace European grasses with native plants, when we install solar panels, when we make our furnaces more efficient – all these things are actually substantial steps toward a total change of life.”

The Episcopal Church’s work on climate change is guided by the Fifth Mark of Mission, “To strive to safeguard the integrity of creation and sustain and renew the life of the Earth,” and is manifest through its support of programs and ministries and its advocacy efforts.

In July, General Convention passed legislation to create a task force on climate change, which will provide resources that parishes can use to “green” their churches and educate members on what they can do to address climate change in their everyday lives.

– Lynette Wilson is an editor/reporter for the Episcopal News Service.