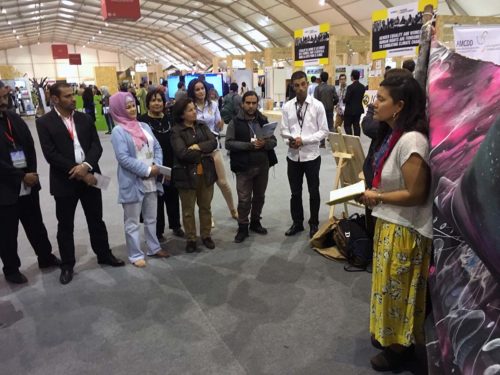 [Episcopal News Service] Last December, world governments and officials came together in France to reach a historic agreement to reduce carbon emissions and arrest global warming. Earlier this week, they gathered again, this time in Marrakesh, Morocco, to continue their work.

“COP21 in Paris was about reaching an agreement; COP22 is about the action needed to reach the agreement and to deepen and strengthen it,” said California Bishop Marc Andrus in an email to Episcopal News Service from the conference.

Andrus represented Presiding Bishop Michael Curry in Paris last year, and is attending this year’s “COP,” or United Nations “conference of the parties” on his behalf. This year’s delegation to the 12-day conference also includes Lynnaia Main, global partnerships officer for the Episcopal Church and its liaison to the United Nations, and Jayce Hafner, domestic policy analyst for the Episcopal Church’s Washington, D.C.-based Office of Government Relations, as well as others from the dioceses of California and Washington, in the District of Columbia.

“As an NGO present in 17 countries and known in its U.N. context as independent of any particular country’s government, the Episcopal Church is well-poised to continue its climate justice ministry and action on a global scale,” said Main, in an email to ENS from Marrakesh.

The election of Donald J. Trump as the next president of the United States cast a shadow over the conference in Marrakesh, as he has vowed to withdraw the U.S. from the Paris Agreement and curb the country’s commitment to reduce its reliance on fossil fuels. The president-elect has called human-caused climate change a “hoax.”

The Paris Agreement, which went into effect on Nov. 4, calls on the countries of the world to limit carbon emissions, which will require a decrease in dependence on fossil fuels in favor of renewable energy sources; and for developed countries, those responsible for the majority of emissions both historically and at present, to commit to $100 billion in development aid annually by 2020 to developing countries.

While closely following developments in the United States, the Episcopal team is working to build relationships with delegations representing Latin America, the Caribbean, Asia and the Pacific, and Europe, places where the Church has a presence, said Main.

This year, Episcopal delegates will be present in the “blue zone,” or the hall where negotiations take place, as well as in the “green zone,” where environmentalist, climate activists, representatives of for-profit businesses and non-governmental organizations and others gather for presentations and demonstrations. As with last year’s conference, the Episcopal delegation is leading daily prayers, chants, and meditation in the green zone’s public square. Themed prayer cards focus on courage, honesty, sorrow and interbeing.

“Our faith bodies have long-standing advocacy efforts in climate action, and these will continue in the light of the United States’ presidential election,” said Andrus during a Nov. 10 press briefing organized by U.S. Climate Action Network.

Last week, Andrus joined more than 540 clergy and lay leaders in a day of solidarity and witness with the Standing Rock Sioux Nation near Cannon Ball, North Dakota.

“In North Dakota,” he continued during the briefing, “I and more than 540 other ordained clergy and thousands of lay people joined with Lakota water protectors in opposing the Dakota Access Pipeline, a faith and action witness that was named by our Presiding Bishop … as ‘the new Selma.’

“The ‘Selma’ to which Presiding Bishop Curry refers was a signal moment in the U.S. Civil Rights movement in the 1960s, when people of many faiths along with people of civil society marched across the bridge in Selma, Alabama, and on to the state capital, to protest the infringement of liberties and life itself for African Americans,” Andrus said.

Curry naming the Native American-led opposition to the Dakota Access Pipeline the new Selma “emphasizes that increasing environmental impacts related to use of natural resources and climate change are matters of ecojustice wherein the wellbeing of all in the web of life … are deeply interconnected,” Andrus said.

The Episcopal delegation, working in both the blue and green zones, coordinates to track the work and negotiations happening at the conference. The negotiations work follows four streams: loss and damage, adaptation, finance, and ambition, said Andrus, in the email message.

The Episcopal delegation uses climate-related resolutions passed by the Episcopal Church’s General Convention as the basis for its advocacy. The team is continuing the work begun in Paris of building a strong network of domestic climate action organizations, Andrus said.

“At COP21 we found that the policy platform we took with us was in line with the best aspirations that emerged in the Paris Agreement, specifically holding warming above a historic baseline to 1.5 degrees Celsius,” said Andrus. “So, the Episcopal Church has made and is continuing to make contributions in advocacy that advance the best aspirations of the human community around climate change.”