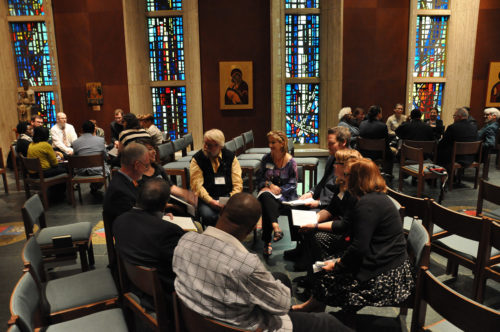 Members of the Episcopal Church’s Executive Council meet with denominational staff members Oct. 20 in the Episcopal Church Center’s Chapel of Christ the Lord in Manhattan to get to know each other better as part of the Church’s effort to have its culture better reflect the loving, liberating and life-giving way of Jesus. Photo: Mary Frances Schjonberg/Episcopal News Service

[Episcopal News Service – New Brunswick, New Jersey] The Episcopal Church’s Executive Council traveled from here to New York on the first day of its Oct. 20-22 meeting to meet with the denominational staff as part of the Church’s effort to have its culture better reflect the loving, liberating and life-giving way of Jesus.

Kicking off the afternoon of conversation, Presiding Bishop Michael B. Curry said the work is an effort “to set this church free to light a fire in the world for good and for love.”

The entire denominational staff met together Oct. 18-19 to continue the culture-change work it has been doing since late spring. During the final exercise of that gathering each staff member verbally committed to one behavioral change. Curry, describing his reaction to listening to those pledges, said that behind each vow was “deep hope for us to be something closer to what God dreams for us to be.”

During council’s opening plenary session Oct. 20 both Curry and the Rev. Gay Clark Jennings reminded members about last month’s historic meeting of the church’s House of Bishops and House of Deputies that many members joined to hear about the culture-change work is being aided by Human Synergistics International. The consultants were hired after an investigation of staff complaints made last fall about the work practices of three senior managers at the Church Center in New York. Curry told Episcopal News Service at the time that the decision was broadly based on addressing the need for any church organization in a leadership transition to examine its culture.

Jennings linked the work to the questions the Church has recently faced about how to change its structures to better enable the work of mission. “If we don’t pay attention to what we’re learning about the culture of the church, and concentrate on changing it to create a Jesus Movement culture across the church, we’ll never make meaningful structural change,” she said.

Changing the Church’s culture “will free up the energy and power of Episcopalians in all orders of ministry to fulfill God’s mission for the Episcopal Church” and the combination of the Church’s culture and energy “will lead us to create a healthy, life-giving, liberating structure that makes the best use of our resources as the people of God,” she said. 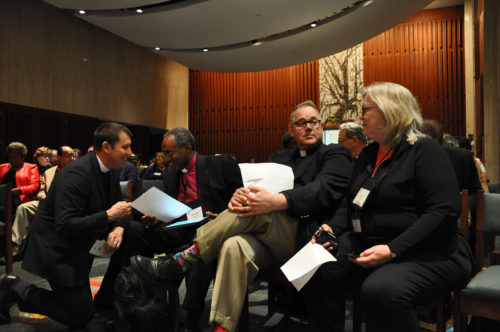 Curry related the story of the mid-19th and early 20th century evangelist Billy Sunday who, upon reading the Book of Common Prayer, declared “If the Episcopal Church ever wakes up – look out.”

“My brothers and sisters, we are awake,” Curry said.

Also during the morning plenary before council traveled to New York City, the Episcopal Church’s three Anglican Consultative Council members, Jennings; Rosalie Ballentine, a deputy from the Diocese of the Virgin Islands; and Diocese of Connecticut Bishop Ian Douglas reported on the ACC-16 meeting.

Jennings said the Episcopal Church members went to the April gathering in Lusaka, Zambia, “despite conjecture from some quarters that we should not go” because of the Communion’s primates call in January for three years of “consequences” for the Episcopal Church after it acted for sacramental marriage equality. Jennings noted that the ACC declined to endorse or impose the consequences that the primates’ meeting “didn’t have the authority to impose.” She criticized Archbishop of Canterbury Justin Welby’s subsequent claim that the ACC had, in fact, endorsed the consequences.

“I have come, regretfully, to conclude that the polity of the Anglican Communion is in peril, and the Episcopal Church’s support for marriage equality is being used as a smokescreen by a few primates who apparently want to co-opt the authority of the Anglican Consultative Council,” she said.

Ballentine, a former council member whose son, Jabriel, now serves on council, said she learned a lot about the Communion during the meeting, which was her first, and she realized that, rather than concentrate on governance in the strict sense, ACC meetings emphasized building relationships to address the world’s issues. The council addressed issues such as discipleship, gender-based violence, climate change, religiously motivated violence and food security that affect all Anglicans and “at no point were we made to feel unwelcome,” she said.

Ballentine was seated at the same table as Welby and the experience gave her “a deep empathy for him and the challenges that he faces trying to hold the communion together.” Welby, she thought, understands “our different histories, the complexities of our different contexts and how those impact the church worldwide.”

The election of Hong Kong Archbishop Paul Kwong as ACC president was worrisome, she said. Noting that some people said electing a primate to chair the ACC would give all the primates a way to communicate with the ACC, Ballentine said “that is, in my opinion, precisely the danger in electing primates.” The primates, she said, “need to learn how to talk to us not just how to talk to each other.”

Douglas, whom Curry praised for his decision to not stand for election as ACC president, said that decision was based on “institutional and cultural” concerns over how his candidacy might effect the ACC, the Episcopal Church and “my own personal vocation” as the bishop of Connecticut.

If he had stood and been elected, Douglas knew that “detractors were already preparing statements about the waywardness of the ACC and how it doesn’t reflect the Anglican Communion because a person from the Episcopal Church was elected. That would hurt the ACC,” he said.

If he stood and wasn’t elected, the loss could have been claimed as evidence that the Episcopal Church does not listen to the primates. In addition, he said, others helped him discern the impact that the presidency could have on his person life and on his vows to be the bishop of Connecticut.

Asked about the Episcopal Church’s $1.2 million triennial contribution to the $3 million annual budget of the Anglican Communion Office, a payment that Jennings said Episcopalians should continue to make with “gladness in our hearts,” Douglas said the payment is about half of what is asked of the Church. Because the asking is based on the GDP of each province’s country or countries and the province’s membership, the Episcopal Church’s contribution is the second largest among the provinces after the Church of England. Douglas noted that current exchange rates make the American dollars go farther in England.

* Treasurer Kurt Barnes briefed members on the 2016 portion of the 2016-2018 triennial budget’s performance through August, saying that both income and expenses are in line with forecasts. He also noted that the five-year net earnings for the church’s $370 million in investments, including $110 million that is invested for individual congregations and institutions, was 9 percent annually. That performance keeps the Episcopal Church trusts funds in the top 20 percent among its peers holding trust assets in excess of $50 million. “This strong performance in no way weakens my resolve I mentioned a few months ago to work towards lowering our dividend payout ratio from 5 percent to 4.5 percent in the next few years,” he cautioned. Council will be asked at this meeting to revise the 2017 year of the 2016-2018 triennial budget to reflect changes in income and expenses since General Convention approved the budget in July 2015. Among the changes are higher diocesan income than assumed, delayed rental income for half a floor at the church center and higher than budgeted medical insurance premiums, Barnes said. 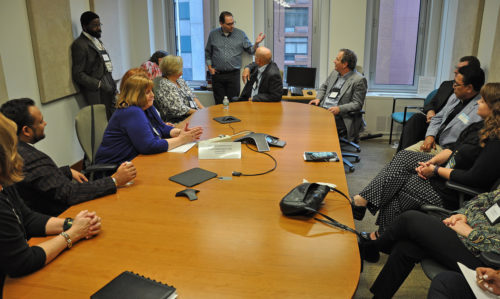 On Oct. 21 council will begin its day with Holy Eucharist at the nearby historic Christ Church in New Brunswick and then spend the rest of the day meeting in its five committees. On Oct. 22 those committees will each report to the full body, proposing resolutions for the full body to consider.

The meeting is taking place at the Heldrich Hotel in New Brunswick, New Jersey, about an hour southwest of the Episcopal Church Center in midtown Manhattan.