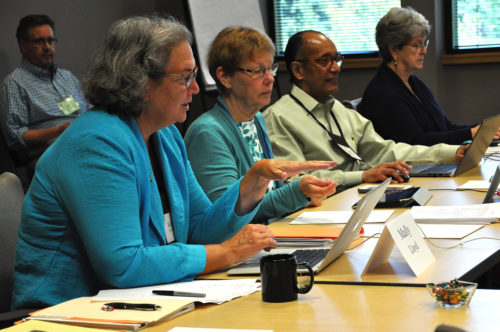 “I really believe that we’re on the right track,” Curry said in his opening remarks.

He told council that his repeated call for the Episcopal Church to embody the Jesus Movement is not “a 21st century invention or a Michael Curry rhetorical concoction.” The presiding bishop said instead that New Testament scholars refer to the beginnings of Christianity as the Jesus Movement.

“When we use the phrase Jesus Movement we’re actually pointing back to the earliest days of Jesus’ teaching and his followers following in his way and footsteps in the power of the spirit. That’s what we’re really talking about,” he said. “And we’re really talking about reclaiming the heritage of the acts of the apostles, the heritage of the movement of people who were profoundly convicted by Jesus of Nazareth that this dude really did have something to say and really did help folks get closer to God and each other – that this Jesus of Nazareth really mattered.”

In the current political season and in the culture as a whole there is “some real polarization; an atmosphere where bigotry – rank bigotry – is often enshrined in laws. This is Jim Crow stuff again, enshrined in laws, and where rank bigotry can be articulated in the public sphere as if it is legitimate discourse,” he said. “That’s a problem. I’m not making a Republican or Democrat statement. This has nothing to do with partisanship now; this has to do with citizenship.”

Curry warned that Christianity is very often seen as being complicit in the culture. “So a witness to a way of being Christian – this is where evangelism does matter by this church and where racial reconciliation does matter by this church – a witness by a church like the Episcopal Church to a way of being Christian that is not complicit in the culture but complicit in following Jesus and looking like Jesus of Nazareth: loving and caring and serving in the way that we see Jesus doing it in the New Testament. That is a counter-narrative to a narrative of narrowness, of bigotry and polarization.”

The Rev. Gay Clark Jennings, president of the House of Deputies and vice chair of council, used her opening remarks to call on the council and the church to consider gender equality in the Episcopal Church as it approaches the 40th anniversary on Sept. 16 of the General Convention’s vote to approve the ordination of women as priests and bishops.

Instead, the church must change “the systems that have promoted inequality for so long and continue to reinforce it for the vast majority of our sisters, lay and ordained,” Jennings said.

In addition the whole church must “strive on behalf of all women in our churches and communities – women who struggle to find and afford quality childcare, women who are trapped in violent relationships or are enslaved by addiction, women who work long hours in poor conditions at low-wages to support their children, women who do not have access to adequate health care and birth control, women who lack documentation and live in fear of deportation.”

And given the “life-threatening conditions” in which transgender women often find themselves, Jennings said, “we must be sure that our quest for women’s equality does not define gender identity in ways that exclude them or silence their voices.”

Also during the plenary:

* Treasurer Kurt Barnes reiterated a warning he gave council at its last meeting in February about drawing too much money from the church’s investment income. Recent budgets have been based in part in taking more from the church’s investment income than what had been its normal annual 5 percent. The 2016-2018 budget is based in part on an effective 5.75 percent investment income draw. The church has nearly $356 million in investments, including about $110 million invested for other Episcopal Church entities and about $180 million in long-term assets available to support the budget, according to Barnes’ report. While the church’s investments have outperformed other investing and index funds, Barnes said there is a “but.” The high dividend draw “is eroding the future purchasing power of the trusts,” he said. Investment models show that going forward the portfolio is likely to earn 7.4 percent, a half-percent lower than historically expected. However, the portfolio would have to earn 8.4 percent annually to sustain the principal, a rate that would require riskier investments. “The arithmetic makes it harder for us to produce a return that keeps the portfolio whole,” Barnes said. The council’s own investment committee, which is an advisory body, passed a resolution May 20 recommending reducing the annual investment income draw in the 2019-2012 budget to 4.5 percent by 2021, with no exceptions for special requests.

* Council heard Tara Holley, director of development, say there is much work to be done to get her department up to the standards that will enable its staff to successfully raise money for major projects. She told council members that the department does not have a strategic plan; positions remain open; a donor database is incomplete and does not have a manager; on-going cultivation of current donors is minimal; and there are no presentation materials for planned projects. These projects include ones in Haiti that exceed $22 million, multiple ones in Navajoland Area Mission  and a new building for the Archives of the Episcopal Church, plus a number of programs and projects related to reconciliation and the Jesus Movement.

Holley also told council members that Curry had pushed “the pause button” on Haiti fundraising “for a few weeks” in order to be able to assure donors the level of accountability they expect.

“We’re looking for accountability, for transparency, for leadership, thoughtful reporting, accurate reporting, and job descriptions … that will make things in Haiti run more smoothly,” Holley said. Curry added that he called for the pause after listening to all the parties involved in helping Haiti rebuild after the 2010 earthquake. While it is clear that the work is a priority, the presiding bishop said, the work must be done “in such a way that we can engender enough confidence so that a [fundraising] campaign can actually get the job done.”

* The members moved into an executive session to “receive confidential briefings on personnel matters,” according to Jennings’ motion for the session. Before she made her motion, Curry told council that the session was needed not to discuss a new “great crisis” but, rather, to update council “on the work and progress that we’ve been doing together – good, positive things” and “we thought it was most appropriate to do that in executive session.”

This council meeting is the first since the departure of three senior managers who had been on administrative leave since Dec. 9, 2015, pending an investigation into formal complaints and allegations from multiple members of the presiding bishop’s staff that the three had violated personnel policies.

On April 4, Sam McDonald, deputy chief operating officer and director of mission, and Alex Baumgarten, director of public engagement and mission communications, were terminated after that investigation found they “violated established workplace policies and to have failed to live up to the church’s standards of personal conduct in their relationships with employees, which contributed to a workplace environment often inconsistent with the values and expectations of the Episcopal Church.”

Curry also announced that Bishop Stacy Sauls would not continue as chief operating officer even though he had “operated within the scope of his office,” did not violate workplace policy and was unaware of the policy violations by McDonald and Baumgarten (both of whom reported to him).

Council met in its five committees during the afternoon of June 8. Council members will reconvene in plenary session the morning of June 9 before heading back into committees. On June 10 those committees will each report to the full body, proposing resolutions for the full body to consider.

The meeting is taking place at the Oak Ridge Hotel and Conference Center in Chaska, a southern suburb of Minneapolis and St. Paul.