[Episcopal News Service – Detroit, Michigan] The House of Bishops, the House of Deputies and the Executive Council heard on Sept. 15 about efforts to shift the culture of the Episcopal Church’s denominational staff closer to that of the Jesus Movement.

Presiding Bishop Michael Curry and others also spoke about how the church’s culture at all levels can reflect the loving, liberating and life-giving way of Jesus.

Fear, mistrust and resentment have no place in such an organization, Curry and House of Deputies President the Rev. Gay Clark Jennings said of findings about the denominational staff’s culture in a two-hour presentation during the opening day of the House of Bishops’ Sept. 15-20 meeting here. Members of the House of Deputies joined the presentation via a webcast, making it what is believed to be the first time that the two houses have met together outside of General Convention.

Curry; Jennings; the Rev. Michael Hunn, canon to the presiding bishop for ministry within the Episcopal Church; Tim Kuppler of Human Synergistics International; and Scott Beilke from Brighton Leadership Group, which partners with Human Synergistics, were the presenters. Several hundred remote viewers signed into the webcast, along with groups of remote viewers.

Curry said listeners should not get depressed by the news that major change is needed in the denominational staff’s culture. “Christianity is dysfunctional. That’s just the name of the game. I mean, it’s called being human,” he said. “How do we get from where we are to where Jesus the Christ is actually calling us to be?”

“We’re not talking about new program,” Curry said. “This is not something that will be here today and gone tomorrow. The Jesus Movement isn’t anything new. It’s a call back to who we are, to the Jesus of the New Testament, to follow him in loving, life-giving and liberating ways; in loving, life-giving and liberating relationships with God, with each other and with all creation.”

As the church answers that call, “our evangelism will be real; as that happens our reconciliation will get serious” and “God only knows” what will be our impact on the world and all of creation, he said.

Jennings told the bishops earlier in the day that the members of the church’s leadership team that began the culture-change work “believe that it can help us become more fully the church that God is calling us to be. I even believe that it will help us, as the psalmist says, to heal the breaches.” She said the invitation to the deputies to join the bishops’ meeting for the presentation is “a mark of how far we have come together.”

During the afternoon presentation, Jennings said that such cultural change can continue only when “people are invited into a system that encourages transparency, accountability, kindness, and embodies the values that we’ve been talking about.”

The theme of the bishops’ fall meeting is “The Jesus Movement: Reconciling Reality and Ideal.” On Sept. 16, the bishops will learn how the Human Synergistics’ findings might apply in their dioceses in a session titled “Becoming the Jesus Movement Culture.”

While Human Synergistics was hired after an investigation of staff complaints that were made last fall about the work practices of three senior managers at the Church Center in New York, Curry told Episcopal News Service the day before the presentation that the decision was broadly based on addressing the need for any church organization in a leadership transition to examine its culture. 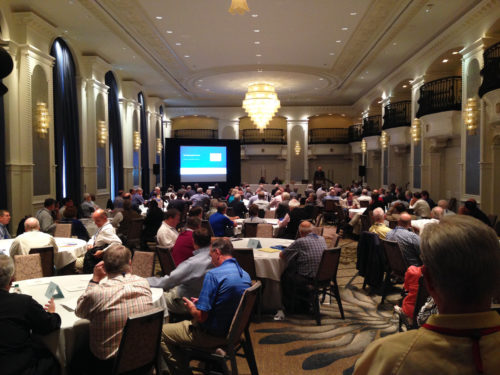 “This isn’t about what happened in the last year or in the last 10 years or in the last 20 years. There are accumulations over time in any organization, in any community, in any family,” he said, characterizing the issues as systemic and “much bigger than any of us or any of the people and players in the past.”

“The truth is I think we would have been doing this [work] in some way, shape, manner or form even if the things that happened late last year hadn’t have happened,” Curry said. “I think I would have come to the conclusion that we’ve got some work to do anyway. This hastened it.”

The ultimate question, he said, for leaders of the church at all levels is “how do we embody the teaching and the spirit of Jesus of Nazareth in the ways we do God’s business?”

If the Episcopal Church really is part of the Jesus Movement, then Jesus’ way has to “hold sway over our own way,” he said. Working towards that balance is always the spiritual work of Christians, the presiding bishop said, adding that this is especially true now “in an era when Christendom is essentially over and when the church is really being called to its deeper roots.”

The church must now see itself not as an institution and part of the establishment but “as a movement of the people of God who are following the way of Jesus and seeking to help the world live that way. We have to reflect the values that we proclaim and that’s part of what we’re doing” with this culture-change work so that the church’s efforts at evangelism, racial reconciliation and environmental justice have integrity.

“It really is an opportunity to struggle to be the body of Christ for real,” Curry said.

Hunn told ENS that it would have been easy for Curry to develop a new organizational chart, rather than closely examine and try to change the organization’s culture into one that fosters loving, liberating and life-giving working relationships across the church.

But the work of culture change is meant to show that “whatever corner of the kingdom we’re in, we can model this openness to having God change us for the better as we focus on the life of Jesus,” he said.

How the cultural research work was done

Human Synergistics International, a U.S.-based company, says it “helps organizations enhance their effectiveness through a focus on culture change, leadership development, and team building.” It has worked with both for-profit and nonprofit organizations ranging from General Electric to the Girl Scout Council of Orange County, California, as well as the Episcopal Diocese of Chicago.

Churchwide staff and members of the Executive Council were invited to take three online surveys. Some were interviewed in groups and some one-on-one as Human Synergistics employees sought to determine where the church organization’s culture fits into the company’s “circumplex” of cultural types – and where the organization would like to be. Those types include constructive, passive/defensive and aggressive/defensive.

The research showed that the Church Center’s culture has operated mainly in the passive/defensive type with some tinges of aggressive/defensive. The primary style of passive/defensive culture, according to Human Synergistics, is avoidance, with people expected to push decisions upward, lay low when things get tough and take few chances.

When asked about their desires and hopes for the future, participants said they wanted to work in a constructive culture in which people are expected to be supportive of others, resolve conflicts constructively, encourage others, maintain their personal integrity, do even simple tasks well and communicate ideas.

How the work began

The culture-change work began in July with the leadership team. The church’s officers, Curry, Jennings, Chief Financial Officer N. Kurt Barnes, and General Convention Executive Officer the Rev. Michael Barlowe; and the presiding bishop’s three canons (Hunn, the Rev. Charles K. Robertson and the Rev. Stephanie Spellers) met for a number of days. They were briefed on Human Synergistics’ findings and discussed how they wanted to work together. They committed themselves to a set of behaviors they are calling the Three Es: esteem, engage, excel.

Esteem involves treating one another as children of God; appreciating each other’s gifts, styles, approaches, and ideas regardless of their place in the organization; and encouraging each other.

Engage involves listening to everyone; telling the truth; wrestling with the issue/problem/idea, not the person; inviting feedback; involving others in decision making; and finding healthy ways to deal with conflict and disagreement. 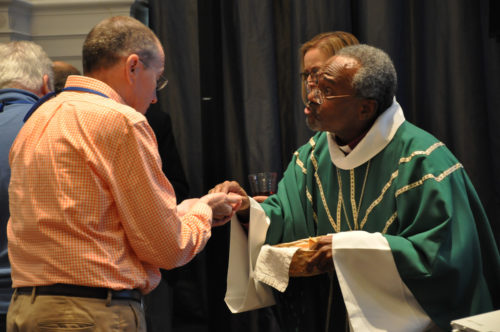 The House of Bishops celebrated Eucharist on the opening day of the Sept. 15-20 meeting in Detroit. Photo: Mary Frances Schjonberg/Episcopal News Service

Jennings said, during a Sept. 12 in-person and online briefing on Human Synergistics’ work to the churchwide staff, that the seven leaders who met in July also pledged to pray for each other each day.

The group also developed a church-shaped model for the work of the entire church. At the top is the Jesus Movement, defined as “Following Jesus into a loving, liberating, and life-giving relationship with God, with each other and with creation, through evangelism, racial reconciliation and environmental stewardship.”

Those General Convention priorities of evangelism, racial reconciliation, and environmental stewardship form the model’s three pillars. At the foundation is the ongoing work of the staff, both inside the church and outside the church, and the governance, financial, legal and operational aspects of the denomination’s structure.

During the Sept. 12 staff briefing, Curry and Jennings invited the members to begin practicing the Three Es as a way to begin changing church culture. However, they emphasized that although the church’s officers and leadership team had met and made some commitments among themselves that they felt might be helpful to changing the organization’s culture, their suggestions were in no way intended to be top-down commands and that the entire churchwide staff needed to be engaged in the culture-changing work.

And Jennings told the joint meeting on Sept. 15 that the leadership team hoped that as others saw those managers practicing the Three Es behaviors that they will decide to join in.

Human Synergistics will continue to work with the church to monitor progress. Staff and others will be invited to retake the surveys as early as next spring as one part of that monitoring.

The House of Bishops is meeting at the Westin Book Cadillac Hotel in downtown Detroit. The gathering is the group’s annual fall meeting. The bishops normally meet in retreat each spring and in the fall in public during non-General Convention years.

On the afternoon of Sept. 16, former Sen. John Danforth (R-Missouri), an Episcopal priest, will speak with the bishops about “Our Ministry to America.” Danforth will then join a panel discussion on the subject along with Jennings; Bishop of Washington Mariann Budde; and the Rev. Kim Jackson, chaplain at the Absalom Jones Episcopal Center in Atlanta, Georgia. Curry will moderate the panel.

Also on the agenda for this meeting is a series of tours on Sept. 17. Bishops and their spouses and partners have the option of traveling to Flint, Michigan, in the nearby Diocese of Eastern Michigan, to learn about the church’s efforts to help residents during that city’s municipal-water crisis. And there are two options to tour Detroit to learn about some of the reasons why Michigan Bishop Wendell Gibbs said in welcoming the bishops on Sept. 15 that “the city of Detroit is not dead” and is in fact undergoing a kind of renaissance.

The bishops and others attending the meeting are also scheduled to visit churches in metro Detroit on Sept. 18.

The election of the church’s bishop suffragan for the armed services and federal ministries and a formal business session are scheduled for Sept. 20. The bishops may issue a pastoral letter from the meeting.

Some bishops and others are tweeting about the meeting using the hashtag #hobfall16.