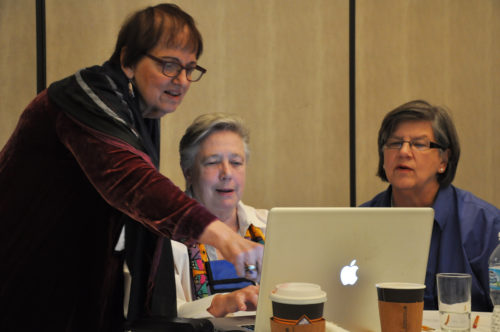 [Episcopal News Service – New Brunswick, New Jersey] This may be the first meeting of the Episcopal Church’s Executive Council since General Convention in July but, the members looked ahead to the 2015 convention and the 2016-2018 budget.

During those discussions, the committee agreed that the process needs to be changed, even though a special task force on the structure of the church, that will begin meeting in 2013, will no doubt discuss budgeting issues. That task force is due to be named in early December. The task force will bring its recommendations to the 2015 meeting of General Convention in Salt Lake City, Utah, and the 2016-2018 budget process must begin during this triennium.

The FFM budget-process subcommittee, Hollingsworth told the council, will include FFM members Susan Snook as chair, Tess Judge, Francisco Quinones, and the Rev. Canon John Floberg. They will also ask the chairs and vice chairs of council’s Joint Standing Committee on Governance and Mission and the convention’s Joint Standing Committee on Program, Budget and Finance to join the subcommittee, Hollingsworth said.

He added that FFM would like Bishop Stacy Sauls, the church’s chief operating officer, and Treasurer Kurt Barnes to be on the subcommittee, and he asked Presiding Bishop Katharine Jefferts Schori and House of Deputies President the Rev. Gay Jennings to appoint representatives from the Standing Commissions on Structure and Constitution and Canons.

Finally, the subcommittee will include, in Hollingsworth’s words, “outside resource people who can lend a fresh eye to this.”

The subcommittee is expected to report to council’s Feb. 25-27 meeting in Linthicum Heights, Maryland, outside of Baltimore.

Saying “we’re well begun,” Jefferts Schori said during a press conference before the end of the meeting that she was “grateful that this council is forming itself around engagement with God’s mission. That really is the framework for all of the work we’re doing.”

Jennings agreed and added that council’s visit to the Episcopal Church Center on Oct. 16 “set the groundwork for members of council and members of the DMFS staff to have productive and fruitful working relationships through this triennium”

Council approved a slightly revised version of the 2013 budget for the Episcopal Church. Each meeting of General Convention passes a triennial budget but, council considers and approves the annual versions of that budget. The 2013 will be posted here soon. The 2013-2015 budget is here.

The Episcopal Church’s triennial contribution to the work of the Anglican Communion Office got a boost of $104,000 when council corrected when Sauls told them he’d made a mistake during the 2013-2015 budgeting process that led to a reduction in the amount. “It was simply a mistake and I apologize for that,” he said.

The presiding bishop told the council that when she was asked about what size of a communion contribution could be “tolerated” and said she replied that “to decrease it significantly is going to send a difficult message, and that I would hope that we would at least keep it even with what we had offered in this last triennium.”

The Episcopal Church contributed $1.1 million during the 2010-2012 triennium. Council members agreed they would revisit the church’s contributions in 2014 and 2015.

Jefferts Schori, Jennings, Diocese of Connecticut Bishop Ian Douglas and Josephine Hicks of North Carolina are due to participate in the Oct. 27-Nov. 7 meeting of the Anglican Consultative Council in Auckland, New Zealand. The communion office’s budget will be approved during that meeting. Jennings said she was sure the Episcopal Church’s ACC members would be asked about the reduction.

Jane Cosby, council member from Philadelphia, Pennsylvania, urged the council to correct the mistake during this meeting because “it doesn’t feel good now in this room to hear that, and it’s not a good image out there, and it’s not a good base for them to make this trip.”

* Discussed in a very brief executive session the Oct 17 announcement that Episcopal Church’s Disciplinary Board for Bishops had certified to Jefferts Schori that South Carolina Bishop Mark Lawrence had abandoned the Episcopal Church “by an open renunciation of the discipline of the church.” Later that same day, the diocese announced that it had disaffiliated from the Episcopal Church after the board’s action. See ENS stories here and here.

* Authorized a $785,000 line of credit to the Diocese of San Joaquin for 2013 to support the continuing diocese. Council has consistently supported the work of reorganizing the diocese since its former bishop and leadership tried in December 2007 to leave the Episcopal Church. Governance and Administration Chair Steve Hutchinson told council “there’s a special and very deep opportunity for mission and ministry and rebuilding of the church there.” He added that what he called “this partnership of trust and support” of the diocese “has been very critical to not just the folks in San Joaquin – that diocese and its future – but the legal process there continues to inform our strategic and legal positions in other litigation and hopefully shows a pattern of how, through that collegial and supportive relationship, the folks in other dioceses who are, have or will face those challenges can feel a sense of community with the whole church.”

* Recommended that council meetings during 2013-2015 be scheduled primarily at the Conference Center at the Maritime Institute in Linthicum, Maryland, a frequent council meeting site in the past two triennia. The council also recommended that the October 2014 council meeting be four days long and that the remainder of its meetings during the 2013-2015 triennium run three days, with the potential of an early 2015 meeting being extended to four days. The decisions, Hutchinson said, will allow council to continue to meet face-to-face three times each year, as opposed to a suggestion in the 2013-20-15 budget that council have one “virtual” meeting each year. Jefferts Schori said that the council does not yet have the technology to conduct such a large meeting with online methods.

* Re-elected member Martha Gardner to be the council’s liaison with the governing body of the Anglican Church of Canada.

* Elected Stephanie Cheney to be the council’s liaison with the governing body of the Evangelical Lutheran Church in America, and Liza Anderson was elected deputy.

The Oct. 15-18 meeting was at the Heldrich hotel and conference center in the Diocese of New Jersey. ENS coverage of the first day of the meeting is here. The second day’s coverage is here. Council spent the third day of the meeting on Oct. 17 in orientation sessions and in committee time.