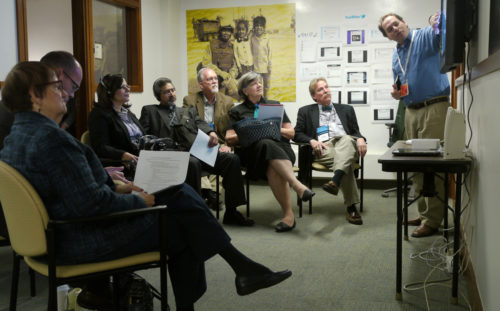 Some of the members of the Episcopal Church’s Executive Council listen Oct. 16 as Barry Merer, manager of web and social media services in the Office of Communication, explains part of the office’s work. The session took place during council’s meeting at the Episcopal Church Center in New York. Photo/Mary Frances Schjonberg

During the morning, the council split into five groups and toured the building, meeting with members of the mission staff who work both in the New York location and across the church. They also heard from the mission support staff, including the Office of Communication, treasurer’s office, and human resources. 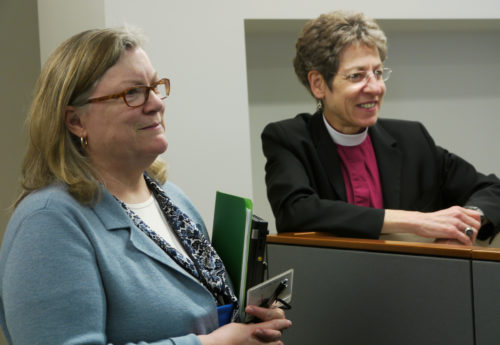 Presiding Bishop Katharine Jefferts Schori, right, and the Rev. Gay Jennings, president of the House of Deputies listen Oct. 16 as staff members explain their work to members of the Episcopal Church’s Executive Council who came to the church center in New York for the day. Photo/Mary Frances Schjonberg

Council and many staff members also participated in an anti-racism/diversity training session during the afternoon. Sarah Sayeed, program and communications associate for the Interfaith Center of New York, and Christina Warner, campaign director of Shoulder to Shoulder, spoke to the session about understanding Islam and Muslims in America. They were followed by a session on immigration issues led by Rachel Steinhardt, deputy director of Welcoming America.

Sarah Sayeed, program and communications associate for the Interfaith Center of New York, speaks to members of the Episcopal Church’s Executive Council and the church-wide staff during a diversity training session Oct. 16 at the church center in New York. Photo/Mary Frances Schjonberg

The Oct. 16 gathering at the church center came on the second day of the Oct. 15-18 meeting which began at the Heldrich hotel and conference center in New Brunswick in the Diocese of New Jersey and council will return there for the final two days of the meeting.

During the center’s regularly scheduled noon-hour Eucharist the Rev. Gay Jennings, president of the House of Deputies, called on the council, staff and visitors to boldly “do something else” with “how we live our lives and structure our communities and ministries.”

“Something else that might just bring us closer to the heart of God and those we are called to serve – the last, the least, the lost, and the left behind,” she added.

Jennings noted that the church was celebrating the feast day of Hugh Latimer and Nicholas Ridley, bishops who were martyred in 1555 for their beliefs about the need for reform in the church. “While you and I won’t be called upon to give up our physical lives for the cause of structural reform, we have given our lives to Jesus Christ and committed to serve God’s church,” she said. “This is always the first step.”

The House of Deputies president said she was not sure what “something else” will look like in the 2013-2015 triennium. “But I am ready and willing to be part of creating something else, something new,” she said. “I believe you are as well. Let’s go there. Let’s be bold and visionary disciples of Jesus. We are called to do no less.”

Council will spend most of Oct. 17 in committee meetings after a final orientation session in plenary. The members serve on one of five joint standing committees, including Advocacy and Networking (A&N), Finances for Mission (FFM), Governance and Administration for Mission (GAM), Local Ministry and Mission (LMM) and World Mission (WM).

On Oct. 18 council will meet in plenary session to hear committee reports and to consider resolutions.

ENS coverage of the first day of the meeting is here.