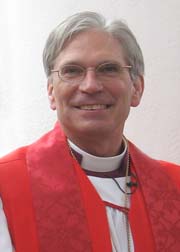 [Episcopal News Service] The Disciplinary Board for Bishops has certified to Presiding Bishop Katharine Jefferts Schori that Diocese of South Carolina Bishop Mark Lawrence has abandoned the Episcopal Church “by an open renunciation of the discipline of the church.”

The presiding bishop spoke by phone to Lawrence on Oct. 15 to inform him of the Disciplinary Board action and to tell him that, effective noon of that day, the exercise of his ministry was restricted, according to an Oct. 17 press release from the church’s Office of Public Affairs. He is not permitted to perform any acts as an ordained person.

Lawrence has 60 days to respond to the allegations in the certification, the release said.

“These actions make it clear the Episcopal Church no longer desires to be affiliated with the Diocese of South Carolina,” the diocese said in an Oct. 17 statement on its website.

The diocese said that the action “triggered two pre-existing corporate resolutions of the diocese, which simultaneously disaffiliated the diocese from the Episcopal Church and called a special convention.” That convention will be held Nov. 17 at St. Philip’s Church, Charleston.

South Carolina Episcopalians, a group that says its purpose is “to provide news, encouragement, and support to traditional churchmen and women in South Carolina who no longer feel they have a diocesan home,” issued a statement late on Oct. 17 criticizing Lawrence’s recent actions.

“Rather than using the past few days to find some common ground with the presiding bishop, Lawrence and his handlers have been working feverishly to generate some semi-plausible narrative that would cast Lawrence and the diocese as victims,” the group said.

The disciplinary board said Lawrence failed to “guard the faith, unity, and discipline of the church” by not ruling three specific resolutions out of order during a diocesan convention on Oct. 10, 2010, or otherwise dissenting, “but instead speaking in support of them in his formal address to the convention.”

The convention passed six resolutions at that convention in response to General Convention’s 2009 passage of revised Title IV canons on clergy discipline, which Lawrence and the diocesan leadership oppose.

Then on Oct. 19, 2011, the board said in its certification, Lawrence enacted Resolution R-11 to remove the so-called accession language from the purpose statement of the diocese’s corporate charter filed with the South Carolina secretary of state.

Finally, on Nov. 16, 2011, the board said, Lawrence directed Diocesan Chancellor Wade Logan to send a quitclaim deed to every parish in the diocese. A quitclaim deed generally transfers ownership of the property from the party issuing the deed to the recipient. The “Dennis Canon” (Canon 1.7.4) states that a parish holds its property in trust for the diocese and the Episcopal Church.

The 18 member board – composed of 10 bishops, four clergy, and four laity – made the determination under Canon IV.16 (A) following complaints from 12 adult members and two priests of the Episcopal Church in the Diocese of South Carolina, according to the press release.

The board issued its decision in a letter dated Sept.18, the Public Affairs’ release said. Following the assembly of numerous documents, the presiding bishop received the letter via mail in her church center office on Oct. 10.

The diocese said in its statement that Lawrence was scheduled to meet Oct. 22 with the presiding bishop “to find a peaceful alternative to the growing issues between the Episcopal Church and the Diocese of South Carolina.”

“The meetings were to explore ‘creative solutions’ for resolving these issues to avoid further turmoil in the diocese and in the Episcopal Church,” the statement said.

Bishop Andrew Waldo of the Upper Diocese of South Carolina and Lawrence arranged the meeting, according to the diocese’s statement.

“We feel a deep sense of sadness but a renewed sense of God’s providence that the Episcopal Church has chosen to act against this diocese and its bishop during a good faith attempt peacefully to resolve our differences,” the diocesan statement said.

The resolutions cited in the board’s certification also figured in an abandonment complaint that the board rejected late in 2011. In November of that year, the Rt. Rev. Dorsey F. Henderson Jr., disciplinary board president, said in a statement e-mailed to Lawrence and reporters that “based on the information before it, the board was unable to make the conclusions essential to a certification that Bishop Lawrence had abandoned the communion of the church.”

The resolutions were among the 12 allegations of abandonment that the board considered at that time.

The diocesan leadership has engaged in a series of moves to distance itself from the Episcopal Church, ultimately stemming from disagreements over human sexuality issues and theological interpretation.

Lawrence and the majority of the diocese’s deputation left the General Convention on July 11, objecting to the passage of resolutions that they said violate the doctrine, discipline and worship of the Episcopal Church.

The resolutions in question were A049, which allows for optional and provisional use of a rite to bless same-gender relationships, and D002 and D019, which affirm the full inclusion of transgender persons in the life of the church (including the ordination process).

However, the Very Rev. John B. Burwell, the sole South Carolina clergy deputy who remained, told Episcopal News Service in an interview after the House of Deputies’ last session on July 11 that “we are not leaving the Episcopal Church.” And Lawrence made it clear the next day, noting that “a deputation to General Convention has no authority to make such a decision.”

Shortly after convention, Lawrence added C029 to the list of resolutions deemed objectionable. The resolution had in its original form called for a “study of the theology underlying access to Holy Baptism and Holy Communion” and was eventually amended to state that “baptism is the ancient and normative entry point to receiving Holy Communion.” Another resolution (C040), which would have allowed unbaptized people to receive communion, did not make it out of committee.

However, Lawrence said that the amended C029 resolution “still moves the church further down the road toward encouraging the communion of the unbaptized which departs from two thousand years of Christian practice” and “puts the undiscerning person in spiritual jeopardy.”

Lawrence said the resolutions about transgendered persons would lead to an abandonment of norms because “gender may be entirely self-defined, self-chosen,” thus “condemning ourselves, our children and grandchildren, as well as future generations to sheer sexual anarchy.”

“So long as I am bishop of this diocese I will not abandon its people to such darkness,” he promised.

At the close of the letter, Lawrence said that “for me to pretend that nothing had changed [in the Episcopal Church is] no longer an option.”

That letter was followed on July 30 by one from the Rev. Canon Jim Lewis, canon to the ordinary, summarizing a meeting Lawrence had with diocesan clergy on July 25. It said in part that Lawrence “asked for a period of grace as he prayerfully seeks the face of the Lord, and asks for God’s direction” while on a vacation to be “spent on mountaintops and in deserts where the bishop will seek refreshment and discernment.”

“Upon his return at the end of August he will meet with the Standing Committee and the clergy of the diocese to share that discernment and his sense of the path forward,” Lewis wrote.

Lawrence then met Aug. 21 with the Standing Committee, “which unanimously approved the course of action he outlined for the Diocese of South Carolina,” according to a one-line announcement in the diocese’s e-newsletter.

No details were released and on Sept. 22, Lawrence told the diocese that it was still “imprudent to reveal that course of action.”

“Things are progressing — we have not stopped or dropped the ball,” he wrote. “Please know that I understand the level of anxiety and concern of many in the diocese. Nevertheless I must ask you all for your continued patience and prayers as we seek to deal wisely and carefully with a fluid situation that requires great discernment and sensitivity on a regular basis. I will communicate to you the details at the very earliest moment such a communication is prudent.”

Lawrence and the diocesan leadership have been distancing themselves from the Episcopal Church for at least three years, including the actions cited by the board

In October 2009 the diocese authorized Lawrence and the Standing Committee to begin withdrawing from church wide bodies that assent to “actions deemed contrary to Holy Scripture, the doctrine, discipline and worship of Christ as this church has received them, the resolutions of the Lambeth Conference which have expressed the mind of the communion, the Book of Common Prayer and our Constitution and Canons, until such bodies show a willingness to repent of such actions.”

That authorization came in response to two 2009 General Convention resolutions passed two months earlier that focused on human sexuality and reaffirmed the Episcopal Church’s commitment to the Anglican Communion. Resolution D025 affirmed “that God has called and may call” gay and lesbian people “to any ordained ministry in the Episcopal Church.” Resolution C056 calls for the collection and development of theological resources for the blessing of same-gender blessings and allows bishops to provide “a generous pastoral response to meet the needs of members of this church.”

“These resolutions seek to protect the diocese from any attempt at un-constitutional intrusions in our corporate life in South Carolina and were in response to the revisions to the Title IV Canons of the Episcopal Church,” according to a diocesan news report at the time.

When Lawrence was first elected bishop in September 2006, he faced numerous questions about whether he would attempt to convince Episcopalians there to leave the church. In a Nov. 6, 2006, letter to the wider church he wrote that he would “work at least as hard at keeping the Diocese of South Carolina in the Episcopal Church as my sister and brother bishops work at keeping the Episcopal Church in covenanted relationship with the worldwide Anglican Communion.”

Lawrence did not receive the required consents to his consecration in 2007 because some standing committee consent forms were canonically improper. He was subsequently re-elected, received the consents required for all bishops-elect and was consecrated January 26, 2008.