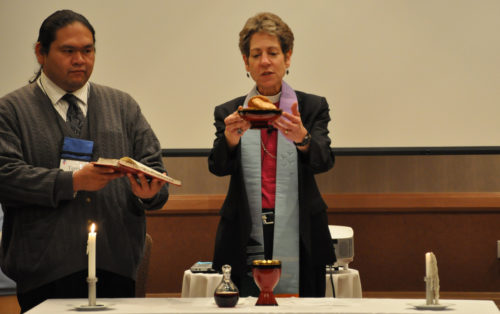 Presiding Bishop Katharine Jefferts Schori and the Rev. Terry Star, a deacon from the Diocese of North Dakota and member of the Episcopal Church’s Executive Council, lead the council Oct. 15 in its first Eucharist of the 2013-2015 triennium. Photo/Mary Frances Schjonberg

[Episcopal News Service – New Brunswick, New Jersey] The members of the Episcopal Church’s Executive Council opened their first meeting of the 2013-2015 triennium here by teaching each other about their role and by beginning to consider the work ahead of them.

The Oct. 15-18 meeting at the Heldrich hotel and conference center in the Diocese of New Jersey, began with Eucharist, celebrating the feast day of St. Teresa of Avila.

Using the appointed “you are the salt of the earth” gospel for the day (Mathew 5:13-16) Presiding Bishop Katharine Jefferts Schori reminded council members that salts are charged molecules that react in the presence of water or other solvents and thus underlie most of the chemical reactions that give life, including the light given off by the sun.

“Saltiness is the potent ability to interact with the world around us – and it’s intimately related to our created nature – it’s part of our earthiness,” she said. “We can’t be light-bearers if we reject our created nature … If we have no salt, we can shed no light.”

Teresa challenged her colleagues in the religious life “to let go of the non-essentials, the frills and the frivolity, so that their own salt could be readier to interact with God,” Jefferts Schori said. “We’re challenged to do similar kinds of work – recovering and focusing on the central aspects of God’s mission that engage this church and its partners. That’s radical work – going back to the roots, to get back to the essence of God’s call to heal the world, and to let go of the details that so often distract us.”

Council members spent Oct. 15 in plenary sessions and in committees learning about and discussing their role in the governance of the Episcopal Church. Council members are divided among five joint standing committees Advocacy and Networking (A&N), Finances for Mission (FFM), Governance and Administration for Mission (GAM), Local Ministry and Mission (LMM) and World Mission (WM).

In their opening remarks to the council, Presiding Bishop Katharine Jefferts Schori, council president, and the Rev. Gay Jennings, president of the House of Deputies and council vice president, outlined their sense of the work ahead in the coming three years.

The presiding bishop said there is “an eternal tension” in understanding that division of duties, adding that council made “some significant progress in its understanding of that tension” during the last triennium.

She said that council must be willing to exercise a “creative and faithful responsiveness to changing realities over the triennium.”

“Yes, General Convention makes decisions on behalf of the whole church but it only meets once every three years. Therefore, the Executive Council has to be willing to make a thick interpretation of General Convention decisions,” she said. “By that I mean you have to think deeply about what those decisions of convention meant and be willing to let them grow in the midst of the triennium. You can’t take them literally.”

There was conflict with in the council during the last triennium, especially as it wrestled with “new ways of acting and being together,” Jefferts Schori said.

“That’s not all bad,” she added. “Conflict is necessary for growth.”

“We’re not simply a board; we’re a community of discernment. Each person here is called to be in some way a spiritual leader in this body for the good of God’s mission that the church engages in,” she told the members. “We’re stewards of the church’s resources, its budget, its reputation, its practices and policies” and are called to “help church be a more effective builder of God’s reign.”

“We have a very hopeful platform from which to begin these three years,” she said. “I hope and pray the church looks quite different three years from now because of the work this body is engaged in.”

In her opening remarks, Jennings discussed her appointments to the interim bodies, which work between General Conventions, but she warned council that “simply appointing a new crop of leaders to populate old structures won’t do us much good.”

“As wonderful as I think the people who have accepted appointments are, and as much confidence as I have in the yet-to-be-named structure task force, we can’t sit around waiting for three years for that group to think big thoughts, write a wise report, and save the Episcopal Church,” she said.

Jennings noted that since Jefferts Schori returned in early October from sabbatical, the two of them have begun the “stimulating and collaborative process” of nominating members to the structure task force called for by General Convention in Resolution C095. There were nearly 450 nominations for the 24 possible seats on the task force, according to Jennings.

“We’re not done yet, but we’ve made plenty of progress and even had some fun. I am grateful for the warm welcome and collegiality of the presiding bishop and members of her staff during these past few months and for their assistance as I learn the ropes,” she said.

Council looks at the 2013-2015 budget
Council heard a brief presentation of proposed new initiatives that would be funded in each of the Anglican Communion’s Five Marks of Mission according to goals General Convention set out in the 2013-2015 budget. The Rt. Rev. Stacy Sauls, Episcopal Church chief operating officer, said the proposals were developed by five teams made up of council members and church-wide staff that also consulted with people involved in such work throughout the church.

Sauls said the proposals were meant to be conversation starters and not the final word on how the budgeted $5.5 million will be spent. The proposals have been assigned to council’s Advocacy and Networking, Local Mission and Ministry and World Mission committees.

The Five Marks of Mission, the Episcopal Church 2013-2015 budget goals related to each and the money budgeted to each are:

* Strive to safeguard the integrity of creation and sustain and renew the life of the earth
(goal of creating and strengthening local networks to care for creation — $500,000).

Council committees will begin considering the proposals during this meeting and are to formally report at the Feb. 25-27 meeting.

Council’s orientation sessions Oct. 15 included information on its canonical, legal and financial responsibilities. As part of the financial portion, Treasurer Kurt Barnes described how the church-wide triennial budget is funded. He reported that income from dioceses (which amounts to two-thirds of the triennial income) has increased this year, despite a budgetary assumption that it would decline by one percent. The Episcopal Church asks that each diocese contribute 19 percent of its income two years earlier, minus $120,000.

Barnes reported that 52 dioceses give the full asking, 32 give between 10 to18 percent and 14 give from one to nine percent. Thirteen dioceses have not filed a report on their income, Barnes said, and thus his office has been unable to calculate the percentage of their payments.

In response to a question about how to improve the financial response from dioceses, Barnes said that while there is a certain amount of “moral suasion” that can be brought to bear, there is no mechanism to require a diocese to pay the asking at any level. He reminded council that some dioceses impose penalties such as a removal of diocesan convention voting privileges, and he suggested that General Convention and council might want to once again consider whether there ought to be penalties for dioceses that do not pay the full asking.

“I would encourage you as members of Executive Council, if your diocese is not at the full asking to question that at your diocesan convention or ask your financial officer or bishop,” he said. 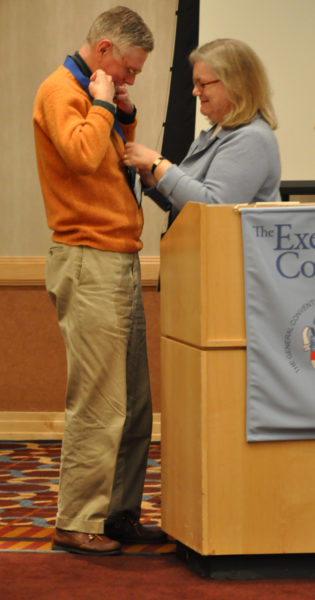 House of Deputies President Gay Jennings presents the Rev. Canon Gregory Straub, executive officer and secretary of General Convention, with the inaugural House of Deputies medal Oct. 15 during the first day of Executive Council’s first meeting of the 2013-2015 triennium. Straub is retiring at the end of the year after nearly eight years and three General Conventions. Photo/Mary Frances Schjonberg

Jennings said council and the church would soon be “bidding farewell to one leader whose jackets will be impossible to fill.”

Straub is known for wearing colorfully patterned sports jackets when he sits on the dais during General Convention, and photos of Straub in some of his more stunning jackets were projected as Jennings presented the award.

Straub’s greatest gifts are “his love of the Episcopal Church, his integrity and strength of character, his ability to size up situations and make good decisions, his devotion to friends and colleagues, his perceptive mind and deep appreciation of history and tradition and his wickedly dry sense of humor,” Jennings said.

She has established the medal to honor clergy and laypeople who have given distinguished service to the House of Deputies and the Episcopal Church.

“I’m flattered to receive the first House of Deputies medal,” Straub said later. “It’s been an unalloyed joy being secretary of the House of Deputies. One of my favorite parts of my job has been my time on the podium at General Convention.”

Also on the council’s agenda:
On Oct. 16 council will visit the Church Center in New York, about 50 miles north of here. While there, the members will meet the church-wide staff and participate in an anti-racism/diversity training session.

The members will return to New Brunswick Oct. 17 for the final two days of their meeting. Council will spend most of Oct. 17 in committee meetings after a final orientation session in plenary. On Oct. 18 council will meet in plenary session to hear committee reports and to consider resolutions.