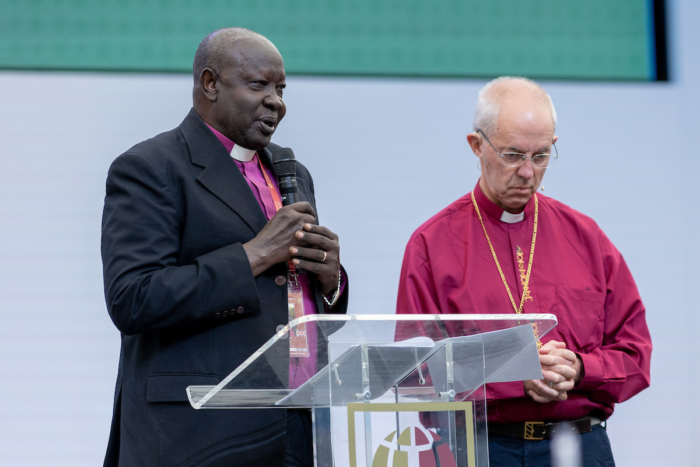 [Episcopal News Service — Canterbury, England] On the Lambeth Conference’s last full day of business, primates continued a tradition of issuing “statements of support” for areas of the Anglican Communion that are facing particular turmoil.

The statements – sometimes called “statements of solidarity” – are distinct from the Lambeth Calls, with their recommendations for action. Instead, the statements bear witness to crises around the world – especially those that affect Anglican provinces – and send prayers for peace and resolution.

Each is sponsored by a bishop or group of bishops, typically from the affected province. The 14 statements are a cross-section of the range of crises around the world, from wars to political instability to persecution to climate change. Bishops spent the morning of Aug. 6 listening to the various circumstances described in the statements – as well as other issues, such as the deforestation of the Amazon in Brazil – and praying for each other and their countries. 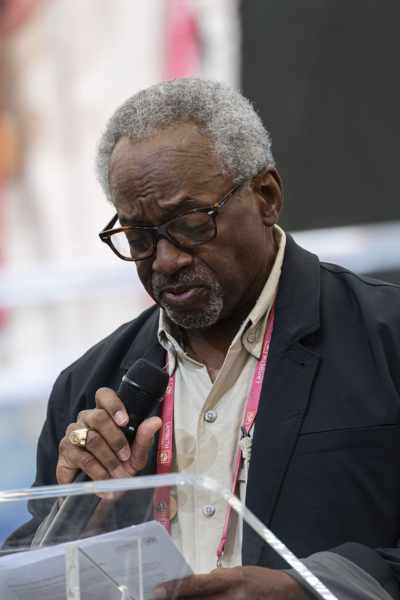 Presiding Bishop Michael Curry sponsored a statement about one of the issues most relevant to Episcopalians in the United States: gun violence, particularly mass shootings. In the statement, Curry mentioned the June 16 shooting at St. Stephen’s Episcopal Church in Vestavia Hills, Alabama, in which three parishioners were killed.

“Remembering the Apostle Paul’s reminder to the Corinthian Christians that ‘if one part of the body suffers, all the other parts suffer with it,’ we bishops are deeply grieved by continued news of mass shootings in the United States and the deaths that result from these awful events,” the statement reads.

It also commends the work of Bishops United Against Gun Violence and honors “the efforts of all people of good will in advocating for legislation that could decrease the number of people in the United States who are killed or wounded by gunfire.”

Not all of the statements were written by bishops from the province they reference. The Statement of Support for Nigeria – whose bishops are boycotting the Lambeth Conference over their disagreement with other provinces on sexuality – is sponsored by Archbishop of Canterbury Justin Welby.

It also says that the Anglican bishops gathered in Canterbury are “grieved by the security, economic, religious and political challenges faced by Nigeria and Nigerians. Nigeria remains a regular prayer point for the prayers of bishops across the Communion. … We firmly believe that Nigeria has the capacity to come out of the current challenges.”

Bishops from Rwanda and Uganda are also boycotting the conference, but Welby delved into the specifics of the dire situation that prompted the Nigeria statement during an evening press conference, including recent terrorist attacks by jihadist extremists.

“My heart breaks looking at the appalling situation of the poorest and the most vulnerable in Nigeria,” Welby said. 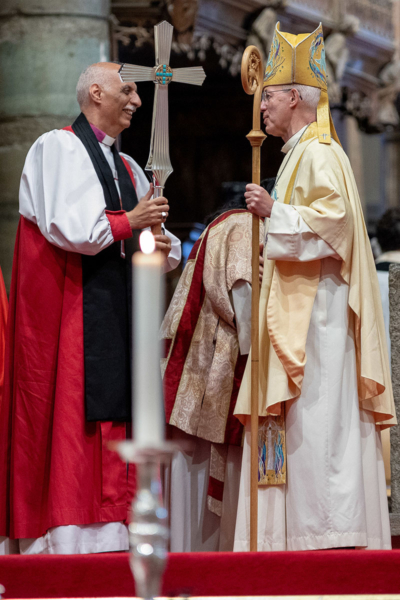 Though most of the statements are responses to challenging circumstances, one is more positive. It welcomes the addition of the Episcopal/Anglican Province of Alexandria as the Anglican Communion’s 41st province in 2020. During the conference’s opening service at Canterbury Cathedral on July 31, Welby presented the new primate, Archbishop Sami Fawzi, with a primatial cross. That ritual typically happens in a new primate’s installation ceremony, but Welby did not attend Fawzi’s in person because of COVID-19.

Other statements deal with warfare in the Democratic Republic of Congo, Sudan and Ukraine; sectarian disputes in Israel/Palestine; the impacts of climate change in South Sudan; the political and economic crises in Sri Lanka and Tanzania; the persecution of Christians and minorities in Myanmar and Pakistan; and the systematic destruction of Indigenous peoples and cultures in Canada and around the world.

Bishop Humphrey Peters, primate and moderator of the Church of Pakistan, said at an afternoon press conference that when Lambeth is over, “the thing that I’m taking back is the eagerness of the Anglican Communion and of the Church of England to combat the problems that are taking place in the world.”

Bishop Zechariah Manyok Biar Mangar of the Diocese of Wanglei in the Episcopal Church of South Sudan said that in the face of such intractable problems as violence, corruption and hunger in his country, the church’s role is to “talk to the government and see if our moral authority can change the government to think about people more than they think about their own power.” 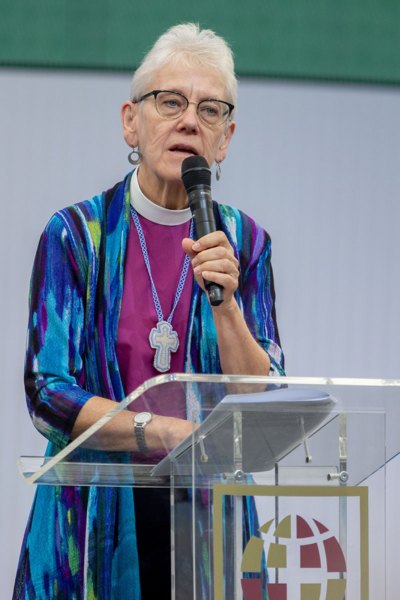 Archbishop Linda Nicholls of the Anglican Church of Canada delivers a statement of support for Indigenous peoples in Canada and the world on. Photo: Neil Turner/ The Lambeth Conference

Bishop Alan Smith of the Church of England’s Diocese of St. Albans said that even though churches don’t have direct power to make the structural changes necessary to solve these problems, they can help by presenting the moral narratives that people can rally around.

“We’ve got to be telling those stories and trying to change the grassroots, which can affect the political mandate in whatever country we’re in,” he said.

A final statement of support also sponsored by Welby addresses the worldwide refugee and migration crisis.

“The statements from individual provinces within the Anglican Communion that have already been presented to this Lambeth Conference highlight the growing impact of conflict, climate change and food shortages on the already massive movement of peoples within and across nations,” the statement reads. It endorses several agreements aimed at resolving the causes and the results of mass migration, such as the United Nations Refugee Agency’s Welcoming the Stranger initiative and Global Compacts on Refugees and Safe, Orderly and Regular Migration. 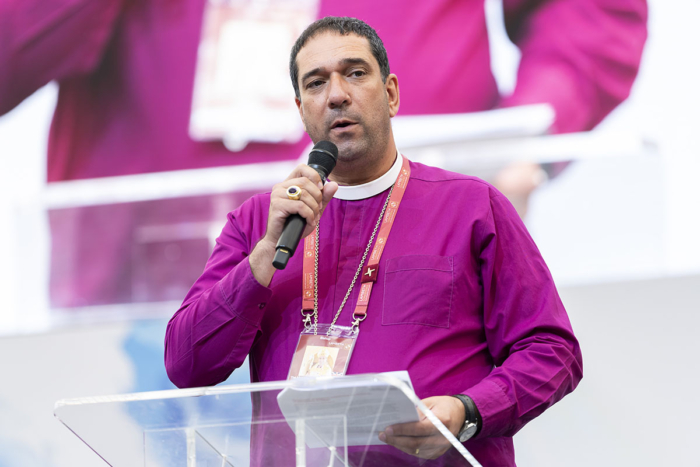 Archbishop Hosam Naoum of the Diocese of Jerusalem and the Middle East reads the statement of support affirming the vital historic presence of Christians in the Holy Land. Photo: Andrew Baker/The Lambeth Conference

The bishops’ session introducing the statements of support took place on the 77th anniversary of the U.S. military’s bombing of Hiroshima, Japan, the first use of nuclear weapons in war. The session ended with an acknowledgment from Welby of the day’s significance, followed by a two-minute silence in remembrance of the victims in Hiroshima and Nagasaki.

“We are reminded of the threats – to every piece of life on this planet, all of creation, every human being – that nuclear weapons pose,” Welby said.

Welby had previously noted the heightened threat of nuclear weapons presented by Russia’s invasion of Ukraine in his opening keynote address. However, the inclusion of the Russia-Ukraine war as one of many crises deserving attention reflected a point made by Archbishop Thabo Makgoba, primate of the Anglican Church of Southern Africa, earlier in the conference.

“I always remind people that there are more than 50 conflicts and wars globally,” Makgoba stressed at an Aug. 2 press conference. “Please, as we focus on Russia and Ukraine, let us weave a bit of our prayer into those areas, so that we pray for peace in the world.”w