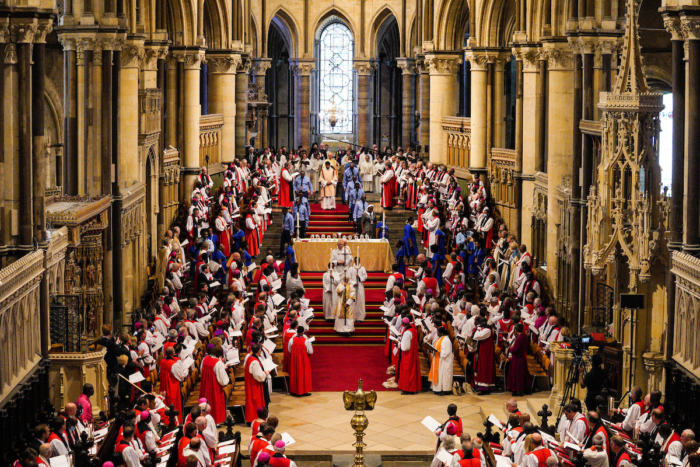 [Episcopal News Service – Canterbury, England] Episcopal and Anglican bishops and their spouses filled Canterbury Cathedral here on July 31 for the opening Sunday Eucharist of the Lambeth Conference, a service spanning several hours and marked by prayer and pageantry in a worship space with more than 1,400 years of history that was described in a welcoming message as “the heart of our communion.”

A little over 600 bishops representing an estimated 165 countries processed into the cathedral starting at 9:15 a.m., taking about 20 minutes to all make it through the cathedral’s Great West Door. Episcopal Church Presiding Bishop Michael Curry and other primates and archbishops of the global Anglican Communion’s provinces were among the last to process.

A fanfare heralded the arrival of Archbishop of Canterbury Justin Welby, who has convened the July 26-Aug. 8 Lambeth Conference of Anglian bishops. Standing just inside the door, Welby offered a brief opening prayer that echoed remarks he has made several times so far at the conference, seeking unity among bishops in their shared faith despite individual differences. 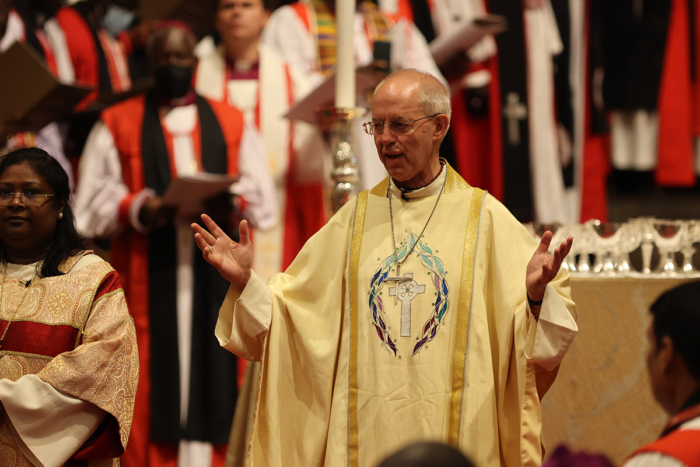 “Let us pray earnestly for God’s blessing upon those who are gathered here,” Welby said, “that through our discussions and our walking together we may grow into a deeper understanding of one another and a deeper love for the world Jesus Christ came to save.”

This is the 15th Lambeth Conference and the first in 14 years, after past conferences typically were held once a decade. Welby initially postponed calling his first Lambeth Conference by two years due to theological divisions between some of the provinces, and his plans to hold the conference in 2020 were delayed by another two years because of the COVID-19 pandemic.

Since the last Lambeth Conference in 2008, much has changed about the Anglican Communion and its bishops, as was apparent in the procession at Canterbury Cathedral. Representing some 165 countries, the bishops who passed under the entrance’s stately stained-glass window displayed a broad spectrum of color, nationality and dress, reflecting the diversity of the Anglican Communion’s 42 provinces – four more provinces than existed in 2008. Masked and unmasked against the coronavirus, some carried backpacks on their shoulders or the order of service in their hands, while others had cellphones at the ready to take pictures and video, as they passed by the spouses seated in the nave and walked up the steps to the interior worship space known as the quire. 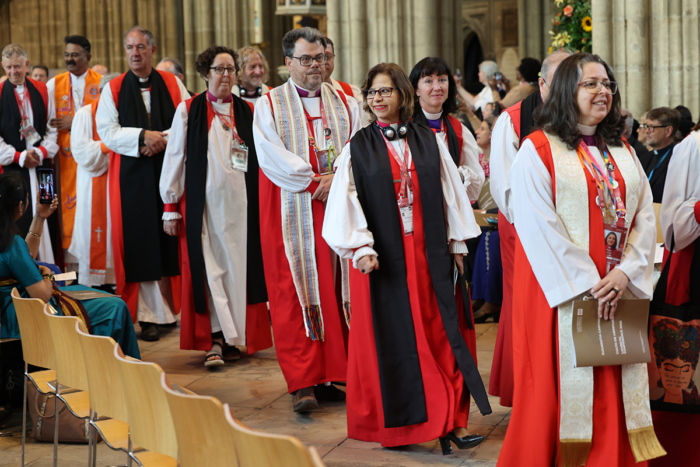 “As we gather in this 15th Lambeth Conference, we carry in our hearts and pressed on our minds, matters and situations that challenge and/or trouble our respective home countries regions dioceses and provinces. We also gather to celebrate a diversity and the gifts that have been generously given to us for the mission and ministry in God’s church for God’s World.” 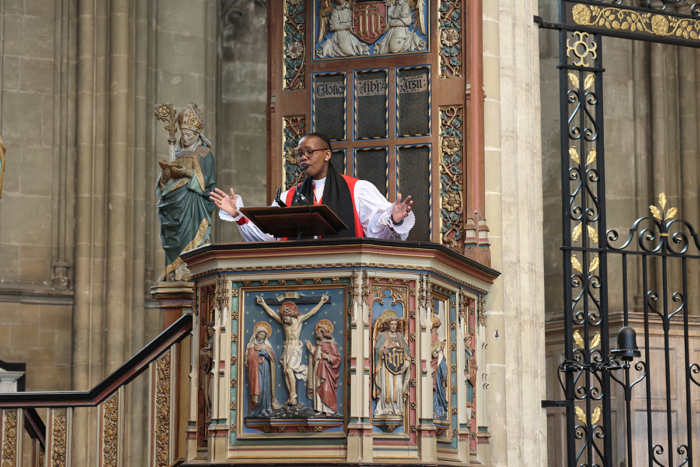 Kgabe, reflecting on the conference’s theme and on the service’s three readings, chose to emphasize servant leadership and hospitality. “There is no limit to how much you can be hospitable or how much you can serve God’s people,” she said, and she invoked a common saying in her culture: “A person is a person through other persons.”

She also seemed to allude to some of the divisions between conservative and progressive provinces that have festered on the sidelines of this Lambeth Conference. But like Jesus, who washed the feet of his disciples and then, in John 13:12-17, told them to go and do the same, “we can and we have it in us to heal and serve the world,” Kgabe said. “Love is central to this act. We do this by following the model that has been set for us by our savior.”

The tone remained joyous as Welby asked Archbishop Samy Fazwy of the Egypt-based Province of Alexandria to join him on the high altar before the peace. Welby also invited up one of the conference’s ecumenical guests, Coptic Orthodox Archbishop Anba Angaelos, in recognition of the Anglican province’s efforts to strengthen relationships with other Christian churches in its region.

And Welby presented a primatial cross to Fazwy, noting that the pandemic had thwarted plans to present the cross earlier, upon the inauguration of the new province in June 2020.

Evidence of divisions, however, crept into the service during Communion, when some conservative bishops refused to receive the bread and wine alongside the handful of gay and lesbian bishops who are attending this Lambeth Conference at Welby’s invitation, a historic first. The conservative bishops, part of the Global South Fellowship of Anglican Churches, have insisted on reaffirming a resolution passed in 1998 at that Lambeth Conference stating that homosexuality is forbidden, marriage is only for heterosexual couples and unmarried people should practice abstinence.

The Global South bishops, calling for sanctions, have singled out The Episcopal Church and five other provinces that have pursued inclusive LGBTQ+ policies. The bishops have vowed to force the issue during a plenary session on Aug. 1. They met with Welby on July 30 to discuss the matter, but no information had been released yet on what, if anything, was decided at that meeting.

The printed order of service for the Sunday Eucharist included an acknowledgement that “brokenness is present within our own Communion and all may not feel comfortable sharing in Communion today.” Attendees were advised that they could come up for a blessing if they chose not to receive Communion.

Welby also spoke briefly to the issue, citing “our own divisions.”

“Let us as we take Communion remain in silence when we’re sitting in our place and pray for the healing of God’s church,” Welby said, “not only the Anglican communion but of the church catholic and universal, that we may find by God’s power the moment when we can come together throughout the world as one.” 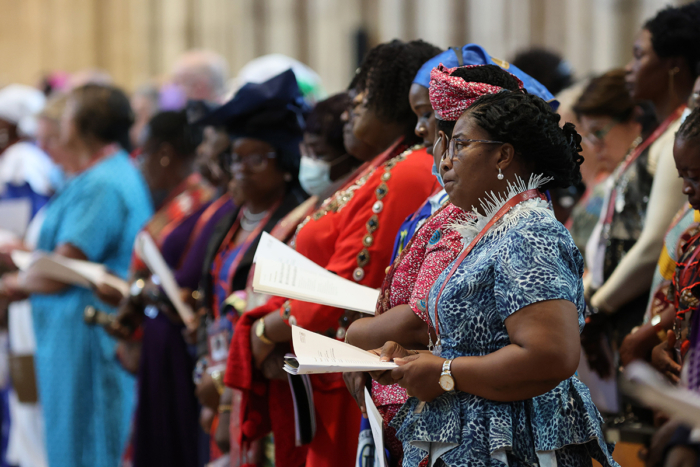 Reporters were assigned seats in the nave behind the spouses and therefore unable to see into the space where bishops were receiving Communion, which was not included on the Lambeth Conference’s video feed or livestream. Some Episcopal bishops later confirmed to ENS that at least a handful of other bishops did not take Communion.

The spouses of the gay and lesbian bishops were not invited to this Lambeth Conference and haven’t been able to attend official spouse events, though they attended the Eucharist, sitting in the observer section, according to an Episcopal Church spokeswoman.

After the service, as bishops processed out of the cathedral, some told ENS they were inspired by the opening service’s themes of service and hospitality.

“I think that this celebration could be a signal that our communion did not lose the capacity to stay together, to stay despite all differences. And this celebration fired in me a new hope,” The Rt. Rev. Francisco Silva, bishop of the South-Western Diocese of Brazil, told ENS following the service.

“The issue of hospitality, to me, is key, a key point of being the church,” Silva said. “What is a church, a place where all our all are welcomed, all received in the best expression of God’s love. I have had a good experience until now, and I hope to stay in this feeling until the end of the conference.”

Even in a time of division, “there is still that sense of, we do have Jesus in common,” Massachusetts Bishop Suffragan Gayle Harris told ENS. “And so that opens up hearts to hospitality.”

Harris added that cultural difference sometimes affect how individuals perceive hospitality. “What may be seen as hospitable in the United States, might be seen as overreaching in another part of the globe,” Harris said. “And so, one speaks from one’s own experience. And you give what you have in love with Jesus, and you receive whatever comes back in the love of Jesus.”

In the bishops’ small discussion groups at this Lambeth Conference, “I have been grateful that there’s been there has not been the acrimony I thought there might be,” Central New York Bishop DeDe Duncan-Probe told ENS. “There have been very clear statements of position. There have been very clear statements of division, but they’ve been offered with kindness,” Duncan-Prove said. “And so, I found that to be welcomed.”

Texas Bishop Andrew Doyle told ENS after the Eucharist that he particularly appreciated Welby’s words before Communion, “to allow everybody to just kind of breathe and be present. And certainly, there was a lot of generosity [extended] to those from our ecumenical partners to those who are sitting out at Communion right now, just to let them know they’re still part of us.”

He called it “a glorious service” and praised the music, which had included singing by Zinafe, an Anglican fellowship organization that is based in the United Kingdom and whose choir members sing in their native Zimbabwean language of Shona.

The Zinafe choir could be found practicing outside at the nearby University of Kent on July 29. Two days later, when they processed with a shuffle and a sway up the center aisle at the beginning of the Eucharist, their voices and drumbeats resonated even louder off the walls and ceiling of Canterbury Cathedral.