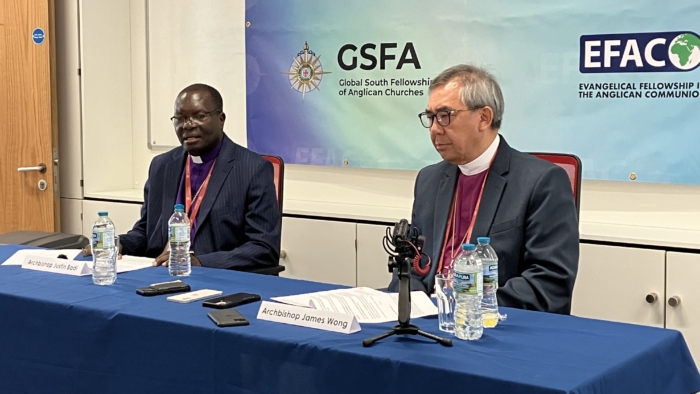 [Episcopal News Service – Canterbury, England] Leaders of a group of conservative Anglican bishops say they will refuse to take Communion while worshiping alongside partnered gay and lesbian bishops at the Lambeth Conference, and they plan to submit and force a vote Aug. 1 on their own measure opposing same-sex marriage and the ordination of gay, partnered clergy.

Badi’s group is engineering a confrontation with The Episcopal Church and at least five other provinces that have pursued inclusive LGBTQ+ policies. The conservative bishops want to “impose sanctions” against those provinces, without specifying the sanctions or citing the authority under which they would be enforced. Their strategy runs counter to efforts by Lambeth Conference planners, including its convener, Archbishop of Canterbury Justin Welby, to publicly downplay disagreements over human sexuality and reject perceptions that the typically once-a-decade Lambeth Conference is a legislative body with any authority over its member provinces. An estimated 650 bishops are meeting from July 26-Aug. 8 at the University of Kent.

“It is not a synod,” Welby said earlier July 29 at his own news conference. “It has no legal authority of any kind over any province under any circumstances ever.” Instead, he said, “my vision for the Lambeth Conference is, it’s a time when the bishops can be refreshed and meet with God with their spouses and that they draw close to God.”

Welby’s depiction of the gathering, however, is complicated by the fact that the Lambeth Conference has set precedent by taking legislative or quasi-legislative actions in the past. At issue now is an action taken at the 1998 Lambeth Conference, where a majority of Anglican bishops backed Resolution 1.10, “rejecting homosexual practice as incompatible with Scripture” and advising against “the legitimizing or blessing of same sex unions nor ordaining those involved in same gender unions.”

Late in the day July 29, Christianity Today reported that Welby had agreed to meet with the Global South bishops on July 30 to discuss the issue. 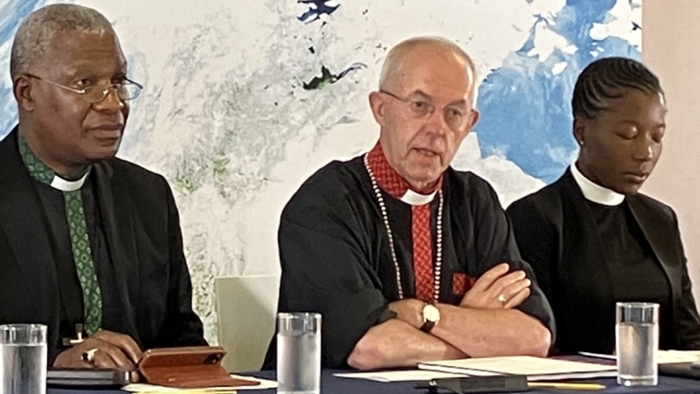 The Global South Fellowship has made reaffirmation of that 24-year-old resolution one of its top priorities heading into this Lambeth Conference, citing the primacy of Scripture, particularly passages that have been interpreted as a biblical prohibition on homosexuality and all sex outside marriage. The bishops, who describe themselves as “orthodox,” appeared to make progress on that goal when language reaffirming Resolution 1.10 “as the mind of the Anglican Communion” was inserted into a draft of the Lambeth Call on Human Dignity, one of 10 Lambeth Calls on a range of subject areas, including discipleship, the environment, reconciliation and “safe church” principles.

Conference planners have described Lambeth Calls as “short written statements that include declarations, affirmations and common ‘calls’ to the church and the world that the bishops want to make.” They were developed in lieu of resolutions – partly in recognition that the Lambeth Conference is not a legislative body and has no jurisdiction over The Episcopal Church and the other autonomous Anglican provinces.

The July 18 release of a study guide outlining the draft Lambeth Calls sparked an uproar by some Episcopal and Anglican bishops, who said they could not support such a reaffirmation, and they raised concerns about the process outlined for registering their approval or dissent. In response, a subgroup of bishops responsible for the Lambeth Calls revised the drafts, eliminating an explicit reaffirmation of Resolution 1.10.

The revised Lambeth Calls still references the 1998 resolution’s assertion that “all baptized, believing and faithful persons, regardless of sexual orientation are full members of the Body of Christ” while now acknowledging that there is no consensus across all 42 of the Anglican Communion’s provinces on the legitimacy of blessings and marriage rites for same-sex couples.

When asked at Welby’s July 29 news conference, Bishop Tim Thornton, who leads the conference planners’ Lambeth Calls subgroup, did not specify who added the language favored by the Global South bishops. Thornton would only say it was finalized by his subgroup, confirming that the language was not submitted by the drafting group that produced the Human Dignity Call.

Thornton also briefly addressed what he acknowledged was the “contradictory” nature of the conference – where a consultative atmosphere of relationship-building incorporates a consensus-building process similar to voting. Lambeth Calls were intended to give bishops a sort of action plan for when they return home to their provinces and dioceses.

“We’re not about making rules or setting things in stone for the other churches. The churches are the places where they make their own decisions. But bishops are significant people,” Thornton said. “How can we make what the bishops are saying clear? … We also want to say, how can this conference do things and make an impact and change things in certain ways?”

That approach has not satisfied the Global South Fellowship bishops. The primates of three Global South provinces, in Nigeria, Rwanda and Uganda, refused to attend this Lambeth Conference and told their bishops to do the same. Badi and the Global South bishops who agreed to attend are now protesting the last-minute revisions to the draft Human Dignity Call, and they will abstain from receiving Communion as “a polite way of telling our brothers something is wrong.”

“Today in Canterbury, we may be gathered together, but we most certainly cannot walk together until provinces which have gone against Scripture and the will of the consensus of the bishops repent and return to orthodoxy,” Badi said.

The opening Eucharist is scheduled for Sunday, July 31 at Canterbury Cathedral, and the closing Eucharist is on Aug. 7. Bishops who attended Eucharist on July 28 and 29 during a bishops retreat told Episcopal News Service that some of the Global South bishops also remained seated rather than taking communion at those services as well.

Since Lambeth Conference 1998, The Episcopal Church consecrated the Anglican Communion’s first gay, partnered bishop in 2003 and later approved rites for blessing same-sex unions.  In 2015, its General Convention endorsed trial rites that could be used at wedding ceremonies for same-sex couples. A follow-up measure approved in 2018 sought to make those rites available to Episcopalians in every diocese where same-sex marriage is legal, regardless of the stance of the bishop.

In response to The Episcopal Church’s approval of same-sex marriage, a majority of Anglican primates voted to impose sanctions on the church for three years at their January 2016 meeting. However, the Anglican Consultative Council did not take action to impose the sanctions.

When asked for clarification by Episcopal News Service at the Global South Fellowship of Anglican Churches’ news conference, Badi would not say how additional sanctions could be imposed on The Episcopal Church at this Lambeth Conference, which is not structured for legislation or enforcement, nor did he say what authority would compel a province to comply with a resolution passed at the 1998 Lambeth Conference.

“As Christians all over the world, and in particular the Anglican Communion, the Scripture is central to our culture,” Badi said. “We are emphasizing Lambeth Resolution 1.10, because it is biblical.”

The conservative bishops plan to raise the issue during Lambeth Conference’s plenary session on Aug. 1 by inviting bishops to “sign up” to endorse the text of a new Global South Fellowship resolution reaffirming the 1998 Lambeth Conference resolution – after Welby denied their “extensive requests” to include such a resolution in the official program for this conference.

Archbishop James Wong of the Province of the Indian Ocean also spoke at the news conference, saying that the conservative bishops would refuse to take Communion as “a visual differential between orthodox and others as we move forward from this conference.”

ACNA was invited to attend the Lambeth Conference, not as a member province but as an observer. Beach refused to participate, “as long as the Archbishop of Canterbury is inviting bishops to Lambeth who are living in immorality and continuing to tear the fabric of the Communion.”

All but Johnson are traveling with spouses, who are able to attend worship services and other events but are excluded from official spouse events. Connecticut Bishop-elect Jeffrey Mello also is attending the conference despite his husband was refused an invitation.