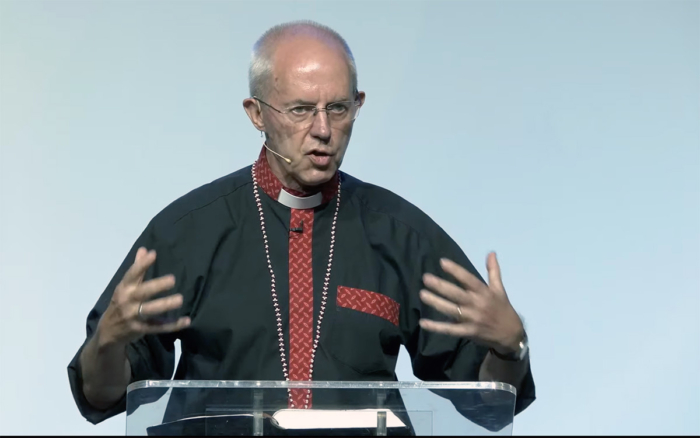 Archbishop of Canterbury Justin Welby gave the first of three keynote addresses to the Lambeth Conference on July 29 at Kent University Canterbury, where the July 26 through Aug. 8 conference of Anglican bishops is being held. Photo: Screenshot

[Episcopal News Service – Canterbury, England] In the first of three keynote addresses to the Lambeth Conference, Archbishop of Canterbury Justin Welby underscored the importance of wrestling with social challenges and warning that new “empires of financial, economic, scientific and technological power” risk further exploiting the world’s most vulnerable people.

The archbishop urged Anglican bishops to “look outwards” and called on the communion to consider how the church can address the challenges of the 21st century, drawing on 1 Peter.

“Many of us come [to Canterbury] aware of what Peter calls the roaring lions; the sense – and often the reality – of attack, hostility, danger and uncertainty,” Welby said.

“For those here who came in 2008, we have seen since then the impact of the collapse of Western banking systems, the end of globalization of trade, COVID-19, the catastrophe over world food prices and availability, a major war involving a nuclear-armed power, as well as hundreds of other conflicts impacting so many, and with growing force and spread, the impact of climate change.

“On top of those global changes, there have been great roaring of lions in so many of our own countries. Wars, persecution, civil disorder, poverty have struck hard at the weakest and the poorest in the flock, killing thousands who put their trust in Jesus Christ as Savior and Lord.”

Some lions, he said, can be “domesticated and made to serve,” as when science and technology are harnessed to provide life-saving tools like COVID-19 vaccines. Some lions, like climate change, “cannot be domesticated and tamed to serve. [They] must be slain.”

In advance of the 2022 Lambeth Conference, Welby had said he hoped to unite the 85-million-member communion under common expressions of faith and social engagement, rather than focusing on debates over human sexuality that have divided bishops at past conferences. Bishops were to come together around the theme “God’s Church for God’s World.” Aspects of that theme were to be presented in a series of 10 “Lambeth Calls,” including science and faith, mission and evangelism, interfaith relations, climate change and human dignity.

Yet even before bishops began arriving in Canterbury, controversy ignited over the inclusion of language from a 1998 Lambeth resolution that homosexuality is forbidden, marriage is only for heterosexual couples and unmarried people should practice abstinence.

Earlier in the day, Welby, during a press conference, reiterated that the Lambeth Conference is not a legislative body. It can engage in a kind of “moral suasion” on certain issues but “cannot tell anyone what they must do.”

Rather than consider resolutions, bishops will be asked to consider the Lambeth Calls; it was the draft call on Human Dignity that included language in opposition to same-sex marriage, language that has since be modified. Late morning on July 29, rattled by the draft’s modification, conservative bishops from the Global South announced that they intend to introduce their own resolution again calling for the affirmation Resolution 1.10 passed almost a quarter of a century ago.

“For many years,” Welby said in his address, “churches, provinces and dioceses have continued to work superbly in their own areas. But too often the Anglican Communion has been known best – when it’s known at all as a communion – for looking inwards and struggling with its own disagreements.

“Those questions, especially on the Christian and Anglican approach to human identity and sexuality, will not be solved at this conference. However, my prayer is that while we are aware of them, because they really matter, we turn as a communion outwards to the entirety of the world that God loves so much that God sent his Son to die for its salvation.”

The Lambeth Conference, the once-a-decade gathering of bishops from across the 42-province worldwide Anglican Communion, is underway at the University of Kent, with some 650 bishops and 480 spouses from over 160 countries in attendance through Aug. 8.

In his two remaining addresses, Welby said he will look at God’s church, and then at bishops’ vocation in leading God’s church, which exists for the sake of the salvation of God’s world.