[Episcopal News Service] Executive Council opened its latest meeting Jan. 25 by highlighting a broad swath of issues confronting the church, including voting rights advocacy, the financial impact of the coronavirus pandemic, final planning for the upcoming 80th General Convention and efforts to respond to the church’s historic complicity with the United States’ system of Indigenous boarding schools.

The central issue, though, on this first full day of the Jan. 25-27 meeting was the experiences of transgender and nonbinary Episcopalians. During a 90-minute listening session, seven clergy and lay leaders discussed how transgender individuals often feel alternately supported by and marginalized by The Episcopal Church, which, they said, has not yet lived up to its promise of being a church for all.

“We have come a very long way, and we still have significant work to do,” said the Rev. Cameron Partridge, a transgender man who serves as rector at St. Aidan’s Episcopal Church in San Francisco, California.

Executive Council is the church’s governing body between the triennial meetings of General Convention. After gathering online during most of the pandemic, members had been scheduled to meet this week in Cleveland, Ohio, but they chose to shift to virtual sessions because of the latest nationwide surge in COVID-19 cases.

The Rev. Gay Clark Jennings, president of the House of Deputies, lives near Cleveland and said in her opening remarks that she had hoped to welcome Executive Council in person. Even so, “I am proud to say that we’re still bringing some of the best of our region to you via Zoom,” Jennings said, noting that Brant Lee, an Episcopalian and law professor at the University of Akron, will speak Jan. 26 about the church’s racial reconciliation initiatives.

Jennings also drew the council’s attention to the recent Winter Talk, a gathering of Indigenous ministry leaders. Jennings and Presiding Bishop Michael Curry attended the conference, held online Jan. 15 and 16, and heard “heartbreaking stories from leaders who have helped bring home the remains of children who died at boarding schools in the late 19th and early 20th centuries.”

Curry and Jennings have pledged to raise up Indigenous issues, including the church’s past role in operating Indigenous boarding schools, at the church’s next General Convention, to be held July 7-14 in Baltimore, Maryland.

The 80th General Convention was postponed from 2021 to 2022 because of the pandemic. Church leaders announced in December that masks and proof of vaccination will be required for attendees in Baltimore, and Jennings told Executive Council that plans are moving forward for an in-person gathering this summer. The presiding officers have formed a “scenario planning group” to consider “various options” and help ensure appropriate health safeguards are in place. 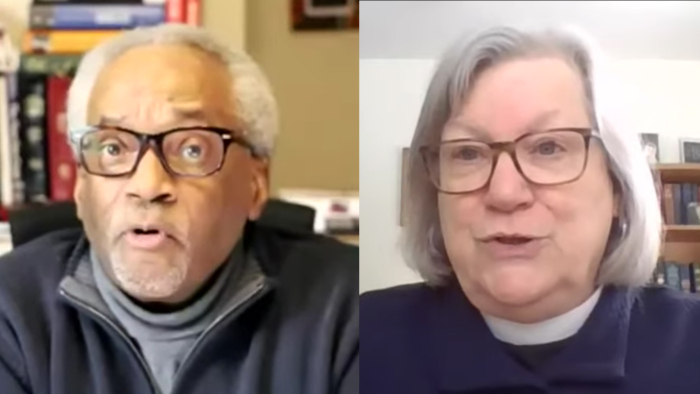 Presiding Bishop Michael Curry and the Rev. Gay Clark Jennings, president of the House of Deputies, each offers opening remarks Jan. 25 at a meeting of Executive Council.

Curry devoted most of his opening remarks to raising awareness of The Episcopal Church’s recent advocacy for passage of federal voting rights legislation that stalled this month in the U.S. Senate. General Convention passed a resolution in 2018 opposing voter suppression, and the Washington-based Office of Government Relations’ Episcopal Public Policy Network has encouraged Episcopalians to call on Congress to pass the proposed new voting protections.

Curry underscored that the church’s advocacy is nonpartisan, and that protecting voting rights is more than a secular ideal. “It is a fundamental human right, grounded in the innate dignity and equality of every human being, created as the Bible says in the image and likeness of God.”

Dioceses’ payment of their assessments to support the churchwide budget generally have been in line with their commitments, Barnes said. He also shared in his presentation that 76 dioceses have received pandemic relief grants, totaling $3 million.

The Rev. Mally Lloyd, chair of Executive Council’s Finance Committee, shared an overview of the committee’s development of the 2023-24 budget that will be submitted for consideration by General Convention in July. “We wanted to acknowledge the financial loss and the people loss experienced through the COVID times, that there is great pain in many, but not all, dioceses related to that,” Lloyd said.

One way Executive Council may try easing that pain is by adjusting the church’s formula for diocesan assessments. Dioceses are asked to contribute 15% of their annual revenue to the churchwide budget, after exempting dioceses’ first $140,000 in revenue. The proposed change would increase that exemption to $200,000. At the same time, the budget proposal would maintain the existing churchwide staff level of 152 employees.

The Finance Committee also is considering what to do with more than $15 million in surplus from the 2019-21 triennium, most of it related to pandemic cost savings, the General Convention postponement and one-time assistance from the federal Paycheck Protection Program. About $2.5 million will be shifted from 2021 to 2022 to cover General Convention. With the remaining funds, $2.3 million was used in the 2022 budget. The latest proposal would apply up to $5 million to the 2023-24 budget. The rest could be put in short-term reserves, to safeguard against sudden revenue shortfalls amid continued pandemic uncertainty, but that is still under discussion.

The Joint Standing Committee for Mission Beyond The Episcopal Church, meeting in the afternoon, approved a resolution expressing “grave concern about the escalation of tensions and military buildup along the border of Russia and Ukraine.” The resolution, a call and prayer for averting conflict, is expected to go before the full council on Jan. 26 timed with Pope Francis’ call for a worldwide day of prayer for peace.

The listening session with transgender, nonbinary and non-gender-conforming Episcopalians was initiated by the Rev. Charles Graves, an Executive Council member from the Diocese of Texas. Graves said he saw a need for “not just acknowledging but truly leaning into and understanding the trans and nonbinary communities in our church.”

Partridge, the San Francisco rector, said he began openly identifying as transgender during his ordination process in 2001 in the Diocese of Massachusetts. “I did not question God’s love for me,” he said, but he and some of the other presenters said they often found less support in their faith communities than they did in the LGBTQ+ community. “In fact, time and again I experienced God’s love and support through that community, which has all too often been judged, rejected and pushed aside in the name of Christianity,” Partridge said.

Much of the push for greater transgender inclusion in the church has been led by a group called TransEpiscopal. Several presenters mentioned the group’s work since 2006 in securing General Convention resolutions affirming the church’s opposition to anti-transgender discrimination and violence against transgender and nonbinary individuals.

Those advances, they said, have not eliminated the disconnect between churchwide policies and transgender individuals’ experiences at the local level.

“While many Episcopalians, most Episcopalians, I would say – are comfortable saying ‘All are welcome,’ many of us have not felt that welcome when being our authentic selves as God created us to be,” said the Rev. Rowan Larson, a newly ordained priest in the Diocese of Massachusetts who identifies as nonbinary and transgender.

Larson offered a brief tutorial on gender and sexual fluidity, as well as pronouns and other terms commonly used by transgender and nonbinary individuals. “Ask the person that identifies that way how they want their pronouns to be used,” said Larson, who uses the pronouns they and them. “It’s easiest just to ask,” they said, while also referring council members to mypronouns.org.

Council also heard from the Rev. Gwen Fry, the Rev. Lauren Kay, the Rev. Kit Wang and the Rev. Iain Stanford, who each shared stories of the challenges they faced as transgender and nonbinary clergy. Sarah Lawton, a lay General Convention deputy from California, told the story of her sister coming out as transgender.

The Episcopal Church needs to do more to raise the visibility of transgender individuals and educate dioceses and congregations, Fry said. As a transgender woman, she described being forced to leave parish ministry after revealing to her congregation that she was transitioning from male to female.

“We’ve done an amazing job of beginning the process of inclusion at the churchwide level, but it just isn’t translating to the diocesan and parish levels. God knows my experience tells us that,” she said. “So, let’s look for ways to help our dioceses and parishes to see and understand us, raise the visibility of our community at the local level and help us provide the education that will change lives.”