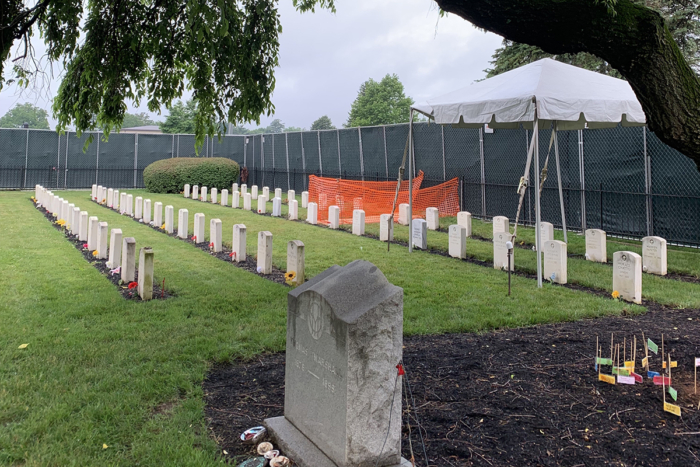 Oneida family members traveled in 2019 to the cemetery at the former Carlisle Indian School in Pennsylvania to claim the remains of three students who were buried there more than a hundred years ago. Photo: Rodger Patience

[Episcopal News Service] Kirby Metoxen had long heard the stories of Pennsylvania’s Carlisle Indian Industrial School from his parents, grandparents and other elders on the Oneida Reservation in Wisconsin, just west of Green Bay. He knew attending boarding schools like Carlisle had devastated earlier generations of Native Americans who were separated from their families, sometimes against their will. The U.S. government-backed education system’s intent was to force them to assimilate into white culture, at the expense of their own cultural identities.

But it wasn’t until a few years ago, thanks to a detour on a road trip, that Metoxen confronted the tragic depths of that history. In the four decades the school was open, from 1879 to 1918, nearly 200 students died and were buried at Carlisle, far from home. 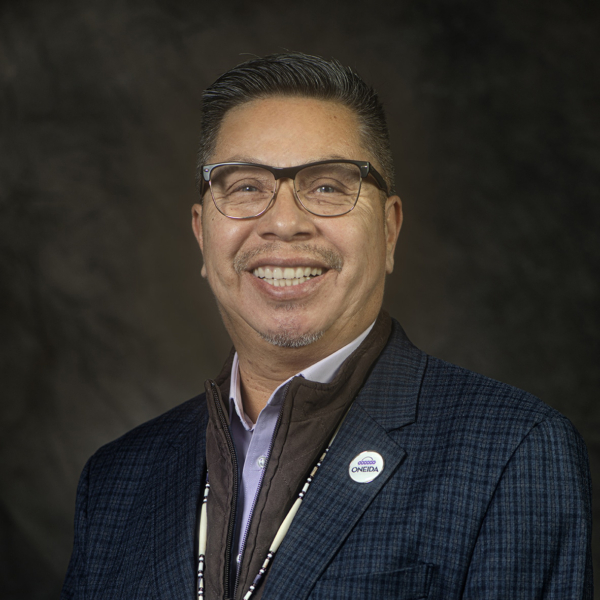 Kirby Metoxen is a member of Church of the Holy Apostles and a tribal councilman in the Oneida Nation just west of Green Bay, Wisconsin. Photo: Oneida Nation

Metoxen, an Oneida tribal councilman and member of Church of the Holy Apostles on the reservation, first visited the former site of the government-run boarding school in 2017, while he and a group of friends were driving through Pennsylvania. They walked through the cemetery that still exists on the grounds, an experience Metoxen described Jan. 15 during The Episcopal Church’s annual Winter Talk gathering of Native American church leaders.

Some of the cemetery’s headstones indicated the deceased were Oneida. “I came across the name Jemima Metoxen, and that’s my last name,” he said in his Winter Talk presentation. “It kind of took me aback a little bit.” The name on another headstone was Sophia Coulon, a common Oneida last name. Further along was the grave of Ophelia Powless. “My grandmother is a Powless,” Metoxen said.

Overcome with emotion, Metoxen struggled to continue his presentation. “I think it affected me, walking through that cemetery, that this is our own,” he said. “These children didn’t ask to be here. How come nobody came to get these kids? It’s forever changed me.”

Ophelia Powless died in 1891 of pneumonia, and Jemima Metoxen died in 1904 of meningitis, according to school records. Both were 16. Sophia Coulon, 18, died in 1893 of tuberculosis. In 2019, all three finally were returned home. Their remains were disinterred from Pennsylvania and brought to the Oneida Reservation as part of an ongoing federal repatriation effort.

A funeral service for the three girls was held in June 2019 at Holy Apostles. Powless is now buried at the church’s cemetery, while Oneida tribal burial grounds hold the graves of the other two girls.

“It was done right for our children, here at Oneida,” Metoxen said.

Discussions of the Oneida repatriation and a parallel repatriation effort on the Rosebud Sioux Reservation in South Dakota formed the emotional core of the weekend’s Winter Talk. Holy Apostles Episcopal Church hosted the two-day conference, which had been planned as an in-person meeting but was moved online because of the  latest surge in COVID-19 cases.

The wide-ranging sessions on Jan. 15 and 16 included Native American music, a church-produced documentary about the colonial-era Doctrine of Discovery and a presentation on Indigenous theological education. The Rev. Bradley Hauff, The Episcopal Church’s missioner for Indigenous ministries, shared highlights from the past year, and Indigenous deputies reviewed some of the issues they hope to raise in July at the church’s 80th General Convention in Baltimore, Maryland.

Presiding Bishop Michael Curry and the Rev. Gay Clark Jennings, president of the House of Deputies, have pledged to “make right relationships with our Indigenous siblings an important focus” of General Convention’s upcoming work. In their joint statement last year, they acknowledged church’s past complicity in the federal boarding school system. Many schools were run by Christian denominations, and at least nine were thought to have Episcopal Church connections. The dearth of churchwide records has made it difficult to fully account for the church’s role.

Curry and Jennings joined other attendees at the online Winter Talk conference and thanked the presenters in brief remarks toward the end of the day Jan. 15. “President Jennings and I are here not to speak, but to hear and to learn and to humbly be present with you,” Curry said.

Some Indigenous boarding schools remain open today, though they no longer operate under former federal policies of forced assimilation. The U.S. Department of Interior announced in June 2021 it was launching a comprehensive review of American boarding school policies dating to 1819, and some lawmakers are pushing for creation of a truth and healing commission to investigate further.

The former Carlisle school site is now part of the Army War College campus. Kirby Metoxen and other tribal and church leaders worked with the U.S. Army to arrange for the repatriation of the Oneida girls’ remains from the Carlisle cemetery, and other tribes with children buried there have pursued similar efforts, with costs covered by the Army. The Rev. Rodger Patience, vicar at Holy Apostles, traveled to Carlisle in 2019 with Metoxen and some of the girls’ relatives to consult with the forensics experts who oversaw the disinterment and examination of the remains. 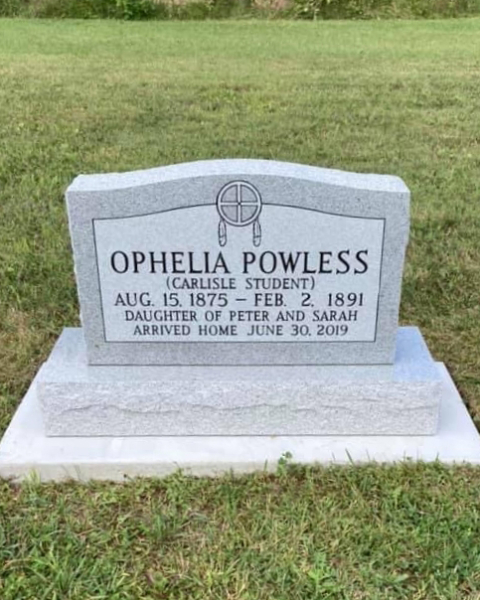 Ophelia Powless, who died in 1891 at age 16 in Carlisle, Pennsylvania, is now buried in the cemetery at Church of the Holy Apostles on the Oneida Reservation in Wisconsin. Photo: Rodger Patience

Though not directly related to the girls, Metoxon said he was overwhelmed by emotion at seeing the bones belonging to the girls. “It was like my own child,” he said. “And the thought they were all by themselves, I couldn’t get over thinking of a young child getting ready to go to the next world, alone, with no family.”

Patience, the Holy Apostles vicar, said it is likely but not certain that Ophelia and her family were members of the church. In 2021, the congregation unveiled a new headstone for Ophelia’s grave in the church cemetery. It identifies her as the daughter of Peter and Sarah and says she “arrived home June 30, 2019.”

Jennings said she was deeply moved by Metoxen’s story, adding that it evoked memories of her own grief over the death of her daughter 11 years ago.

“In the deepest times of grief, early on, I would just say ‘come back!” Jennings recalled. “In my grief, ‘Come back to me!’ And so, I imagine Peter and Sarah Powless [saying], ‘Please come back! Come back, Ophelia!’ And you brought her back – her parents’ deepest desire, to have her back.”

The Rev. Lauren Stanley, canon to the ordinary in the Diocese of South Dakota, presented information at Winter Talk about the efforts to repatriate students’ remains to the Rosebud Sioux Reservation.

The Rosebud effort began when teenagers from the tribe’s Sicangu Youth Council visited Carlilse during a 2015 trip to attend a Washington, D.C., summit for Indigenous youth – a trip that the Rosebud Episcopal Mission had donated funds for. When they saw the graves on the grounds of the former school, “they recognized [the names of] a bunch of their relatives – of children who died there,” Stanley told Episcopal News Service in a previous interview.

“They said, ‘We need to bring these children home.’ They were very upset, very distraught to see these gravesites, including a bunch that are marked ‘unknown,’ which is just a ridiculous travesty.”

The teens asked the Rosebud Sioux Tribal Council to help bring the remains back to Lakota land. In May 2016, the tribe hosted a meeting with lawyers from the Army, during which Stanley and others testified in support of repatriation and the Army agreed to fund the exhumation of the remains.

After years of delays, the Army transferred the remains of nine children to the tribe in a ceremony at Carlisle in July 2021. Tribal members drove the remains over 1,400 miles to the Rosebud reservation in a caravan that grew to about 400 vehicles, with people lining roadsides to salute them. 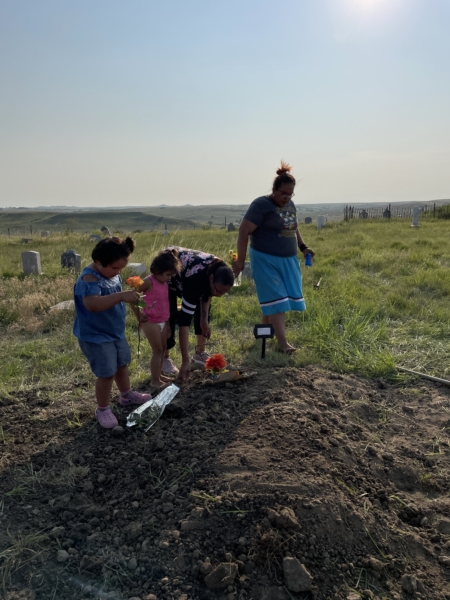 Six of the children were buried in the Rosebud Sioux Tribe Veterans Cemetery on July 17. Three received private family burials, including one — Ernest Knocks Off (White Thunder) – who was buried in the Old St. James Episcopal Cemetery. The family, who are Episcopalians, invited Stanley to offer prayers at the burial.

Jennings said such stories underscore the need for the church to face the truth of its own historic complicity in the boarding school system.

“I know some of the history, but hearing it in the way that all of you presented it today hits in a deeper level, and to come to grips with our own church’s participation in that will take perseverance and tenacity on our part,” Jennings said. “And I think I can speak for the presiding bishop that both of us are deeply, deeply committed to doing what needs to be done.”