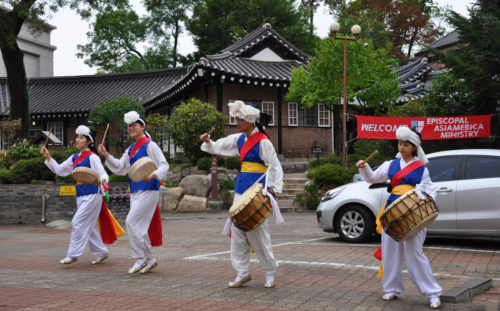 [Episcopal News Service – Seoul, South Korea] One of the takeaways of Episcopal Asiamerica Ministries’ international consultation here was that ministry to Episcopal Asiamericans is at a crossroads of sorts and the direction it takes could influence the entire church.

“Know that the work you are doing is changing the face of The Episcopal Church,” Presiding Bishop Katharine Jefferts Schori told EAM participants. “Keep at it. Be bold, be confident. God is doing a new thing in our midst because of our collaboration and growing partnership.”

The main venue for the Sept. 30-Oct. 5 gathering was the Cathedral of St. Mary and St. Nicholas in downtown Seoul. The gathering’s theme was “Celebrating our Partnerships; Uniting our Mission.”

Noting the more than 140 Asian Episcopal congregations around the United States, Jefferts Schori said, “Asian roots are deep and pervasive in The Episcopal Church.”

The first recorded Chinese-Anglican service in North America took place in 1871 in Virginia City, Nevada. Ah Foo ministered to Chinese miners and railroad workers in Virginia City and Carson City in the 1870s. Hiram Hisanori Kano worked with Japanese immigrants in Nebraska beginning in the 1920s. He was the only Japanese-American in Nebraska to be interned during World War II. And, recently, the Rev. Toua Vang was ordained in Minnesota in 2013, becoming the first ordained Hmong priest in the Anglican Communion. 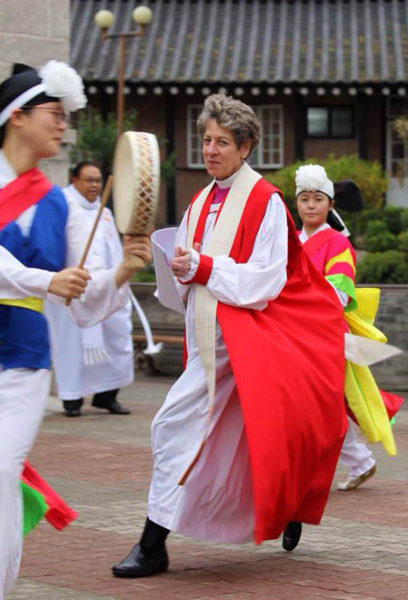 Jefferts Schori said that Episcopal Asiamerica faith communities are anchored in Jesus’ message of deep friendship despite differences. “Boundary and border crossing is the call of Jesus to find a friend in unexpected places, particularly in the face of enmity, difference, and ‘the other,’ ” she said during her keynote address. “The very experience of migration, and moving across a national border, is a witness to that kind of courage. EAM communities bring that courage in abundance, and it can be contagious – contagious enough to plant a new virus in our DNA that disposes us to see the new person as friend rather than enemy.”

EAM’s congregations, she suggested, can be “provocative pockets of counter-cultural courage in the face of difference, and that gift is urgently needed across the world today – certainly in the U.S., caught up as it is in anti-immigrant prejudice and fear in so many places.”

Jefferts Schori asked what the growing migration of Asians across the world means for The Episcopal Church and for the Anglican Communion. “Certainly the presence of various Asian cultures has been an expansive blessing for this church, and has offered other cultures a broader and richer understanding of what it means to love God and neighbor with all our heart and soul and mind and strength,” she said. “We learn that God is worshiped in ways that are broader and deeper than what we first knew: the deeply quiet reverence of a traditional Japanese liturgy; the surprising vigor of an Igorot gong dance; the liveliness of a Chinese dragon dance welcoming a new bishop in San Francisco or Los Angeles; the feathered smudge, drum, and flute of Native Americans.”

Meanwhile, Diocese of New York Bishop Suffragan Allen Shin, the church’s first Korean-American bishop who was elected in December 2013, noted that the nature of Episcopal Asiamerican congregations has changed during EAM’s 42 years. When Asian immigration dramatically increased in the 1960s and 1970s due to changes in U.S. law, many Asian priests were brought over to minister to immigrant communities and they “as immigrants themselves lived alongside their immigrant parishioners in their struggle to establish a new life in the new land.”

“But today in many of our Asian congregations most people have been in the U.S. for 30 to 50 years or longer. So to bring priests from Asian countries is a challenging and complex prospect,” Shin said. 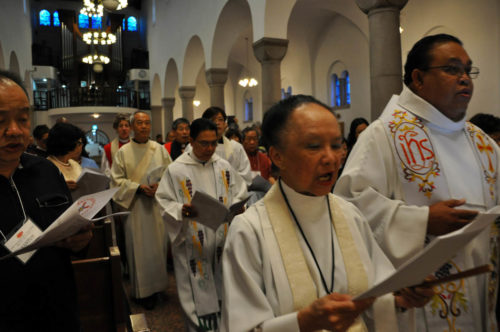 Participants process into the Anglican Cathedral of St. Mary and St. Nicholas in downtown Seoul Oct. 1 for the opening Eucharist of Episcopal Asiamerica Ministries’ international consultation. EAM Council President the Rev. Bayani Rico is at right. Processing with him is the Rev. Fran Toy of the Diocese of California. Following them is the Rev. Winfred Vergara, the Domestic and Foreign Missionary Society’s missioner for Episcopal Asiamerica Ministries. Presiding Bishop Katharine Jefferts Schori and Seoul Archbishop Paul Keun Sang Kim, primate of the Anglican Church in Korea, complete the procession. Photo: Mary Frances Schjonberg/Episcopal News Service

EAM members must work together to meet the challenge of ministering to both immigrants and the subsequent generations of Asian Americans. “I am afraid as a community we have not done a very good job of raising new leadership of the next generation Asian-Americans and many Asian-American congregations are faced with the possibility of dire consequences,” he said.

Shin, who came to the United States as a child with his parents in 1972, said that in 1969, Asians comprised 11 percent of the all immigration to the United States that year while the Latino segment constituted 39 percent. In 2012, the Asian segment had grown to 34 percent while the Latino population was at 41 percent. That same year, according to U.S. Census Bureau figures Shin cited, Asians were the fastest growing ethnic minority group at 2.9 percent while the Latino/Hispanic population grew by 2.2 percent. Among Asians, Filipinos make up the largest group with 16.2 percent; Indians, 15.6 percent; Chinese, including those from Hong Kong, 15.4 percent; Vietnamese, 10.4 percent; Koreans, 9.4 percent; Taiwanese, 3.3 percent; Japanese 3.1 percent; Pakistani, 2.7 percent; and Thai 1.9 percent.

Noting that 37 percent of the U.S. population in 2012 was from a minority population or mixed race, Shin said that the emergence of this “ ‘hapa’ (mixed race) population will change us all.”

“Globalization and changes in the immigration pattern will affect ethnic enclaves and ethnic specific parishes. Many ethnic specific congregations have experienced a silent exodus of young people of the second and third generations in the United States,” he said. “On some level, the exodus of youth and young people is a challenge faced by perhaps all congregations. But, this poses a particularly serious challenge to the ethnic congregations as they find their congregation members graying rapidly without new growth.”

There are more than 140 Asian-Episcopal congregations around the United States. In Matthew 9:17, Jesus reminded his listeners that new wine cannot be put into old wineskins, and Shin noted the challenge of finding new ways to minister to both new immigrants and younger generations descended from Asian immigrants to the United States. “What do we do with the exodus of our younger generation Asian-Americans from our churches? What new wine skins do we need to create and develop so that both the old and the new can be preserved?” he asked. “This, in fact, is a challenge all our congregations are facing today, not just Asian congregations. But, particularly for the Asian context, this is a serious issue we must deal with.” 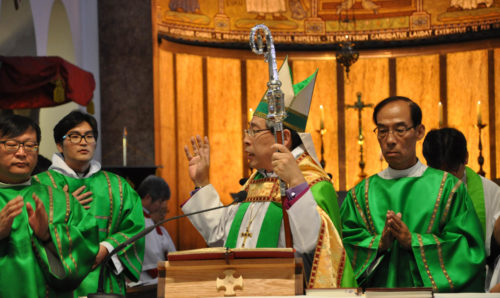 Episcopal Asiamerica Ministries came to Korea, said the Rev. Bayani Rico, president of the EAM Council, by invitation from Seoul Archbishop Paul Keun Sang Kim, who is also the primate of the Anglican Church in Korea, to join the celebration of its 125th anniversary.

The Anglican Church in Korea was established Sept. 29, 1890, with the arrival of Bishop Charles John Corfe as the first diocesan bishop of Seoul. It has grown to over 65,000 members in 120 parishes and missions.

Some 200 people from North America participated in the EAM consultation. The 125th anniversary celebration drew hundreds of people from Korea and around the world.

The Rt. Rev. Stacy Sauls, chief operating officer of The Episcopal Church, spoke to the consultation about the gift of transformation that he was given years ago in Korea after he and his wife Ginger adopted two Korean children. The experience, he said, taught him about seeing the world through Asian eyes and transformed his understanding of what it means to be made a child of God.

The Domestic and Foreign Missionary Society, which is the legal and canonical name under which The Episcopal Church is incorporated, conducts business and carries out mission, helped sponsor and supported the gathering.

Episcopal Asiamerica Ministries includes Asian-Americans in Chinese, Japanese, Korean, Filipino, Southeast Asian and South Asian convocations. It is a U.S.-based ministry association that serves Asian-Americans and Asian immigrants and relates to churches in Asia especially belonging to the Anglican Communion.

Asian-American or “Asiamerican” describes both Asian immigrants in the United States as well as Asian-Americans born in the United States – Chinese, Filipino, Korean, Japanese, Southeast Asian (Vietnamese, Laotian, Hmong, Burmese) and South Asian (Indian, Pakistani, Bangladeshi, Sri Lankan). The EAM office offers resources on mission work, church revitalization, and racial justice – among and beyond Asian communities in the United States. It assists dioceses to start new Asian congregations and strengthen existing ones, and advocates for Asian empowerment at all levels of the church: among seminarians, women, youth, clergy and lay leaders.

Additional ENS coverage of the gathering is here.

Editor’s note: This story was edited Oct. 9 to clarify the immigration percentages cited by Bishop Shin, after those percentages were changed in his original text.