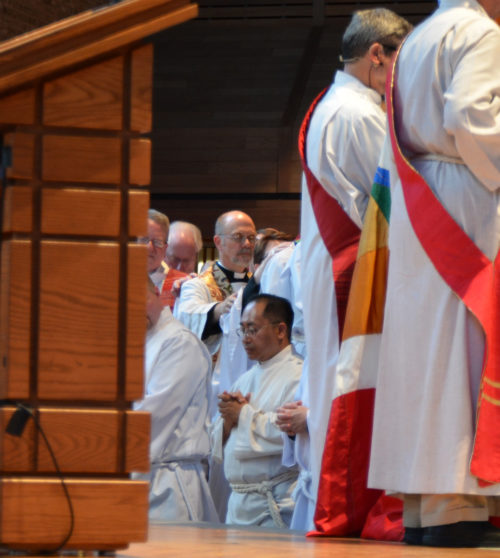 Toua Vang waits for hands laid upon him at his ordination June 27 in Breck School Chapel, Golden Valley, Minnesota. Photo: Diocese of Minnesota

It looked very much the same as the other ordinations; Prior placed his hands on Vang’s head, saying: “Therefore, Father, through Jesus Christ your Son, give your Holy Spirit to Toua; fill him with grace and power and make him a priest in your Church.”

But it was not the same.

The Rev. Winfred Vergara, Episcopal Church missioner for Asiamerican Ministries, believes the significance of this ordination goes beyond simple demographics. “It demonstrates that the Episcopal Church welcomes all people,” says Vergara. “The Hmong, Nepalese, Cambodians, and the Laos in the United States are probably some of the most marginalized, underprivileged communities here. So it demonstrates our passion and our commitment to empower people. We do not simply speak about it.”

The Hmong culture is very communal; Vang himself is extremely humble. It can be easy to see this as the story of a community rather than an individual. Certainly, the Hmong community in St. Paul is a huge part of this story, and the elders of the community early on identified Vang as a potential spiritual leader, encouraging and supporting him. However, Toua himself took enormous risks and leaps of faith.

“Toua was identified and affirmed by the community because of his particular gifts,” says Prior, “and his strong desire to serve both his people and the larger world. Toua has a particular missional zeal that really is very compelling — that you hear from hardly anyone else. He really feels this sense of calling. It’s part of the story of his people because they’ve been people in movement. He feels the call to be with other people who have been dislocated and have had to take a similar journey. I think he feels called to serve people who find themselves dislocated and have to move to a new world. He’s really passionate about that.”

Inspired by a conversation with the Rev. Joseph Constant from Virginia Theological Seminary about racial minorities in the church, Vang went through a self-awakening.

After much reflection and prayer following the visit with Constant, Vang felt that the Holy Spirit wanted him to think about his life.

“So I thought about my life way back as far as I could remember, as a little boy,” says Vang. “I put the pieces of the puzzle together. I was born in Laos, in a war-torn country; I experienced the war, the airplane rages in the sky, bomb explosions, cannon explosions, gunfire, dead people, starvation, sickness, and then the journey when we escaped from Laos and the long journey to Thailand for almost four years, and then coming to this country, learning a completely different language and culture: I had a lot of challenges in my life.”

For a Hmong man with a family of four children to support, going to seminary was an enormous risk and hardship, explains the Rev. Letha Wilson-Barnard, the vicar of Holy Apostles and Vang’s sponsoring priest. “This is a really important part of the story of this group of Hmong coming to the church,” she says. “In the 55 years since they were first introduced by French Catholic missionaries to Christianity, only a few Hmong ever pursued the priesthood because being married with children is so important — it’s as if not doing that would be giving up a part of your humanity. Family is so deeply a part of the Hmong culture . . . family is so critical, and to give up having children and being married — it was almost unthinkable.”

Leaving, even temporarily, the close-knit Hmong community in St. Paul for Virginia Theological Seminary was equally difficult to contemplate.

“The thought of leaving families, jobs, and responsibilities is too hard [for most Hmong to imagine],” she says. “It was a huge sacrifice for Toua and his family to do this. There are some Hmong working in Washington, D.C., but otherwise there is no community out there.”

Vang was going leave behind a rich and supportive community for several years.

Despite the challenges, Vang felt very strongly called to ministry. “When I understood that ministry was my call,” he says, “I felt very happy. I was in tears, but I was very happy.”

“We struggled a lot financially, health-wise; I still struggled with my health at seminary. But with the support of the school and many generous people from Minnesota and the bishop and many churches and the national church and many places around the nation, we survived. They sent support and prayers and we made it through seminary, which is a blessing. It was a rewarding, challenging journey for my family and me, but we made it.”

“[These sacrifices and struggles] also helped me to really understand yes: I am truly called to minister. Because if not, with all of these struggles and hardships, I don’t think I would have made it. But because it is a true calling, God has called all of these people to help me in this ministry,” adds Vang. “I will still need a lot of support; I don’t think I will make it without a lot of support from the Episcopal Church and colleagues, friends, and individuals. It is too much. But I have high hopes in my ministry that God will make it possible to do that.” 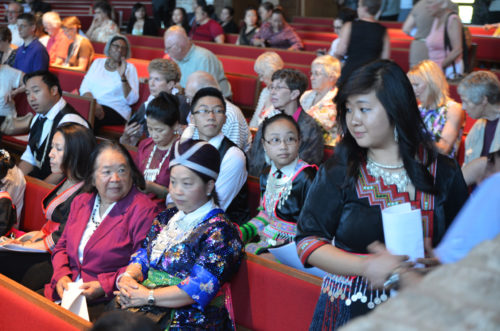 Toua Vang’s community
Vergara believes that Vang’s ordination demonstrates the welcoming aspect of the Episcopal Church at large, as well as the enormous resolve of the Hmong community in St. Paul itself.

“The Hmong, despite their poverty,” says Vergara, “took part in the education of Toua. The whole community simply did not depend on the favors of the institution. They themselves spent money; they organized themselves to put up a scholarship for Toua.”

Vang agrees. “The support that my family and I have received in the past three years is a big blessing. I have never received such warm love and support in my whole life. Whomever I turn to and whomever I talk to, they always find something to help resolve my issues.”

His home congregation, Holy Apostles, is as unique as he is: its transformation into the only Episcopal Hmong-majority church was an unusual confluence of a Catholic Hmong community needing a worship home, fortuitous friendships, and a lot of hard work on the part of Hmong elders and Episcopal Church leaders. “It’s interesting [now] that Holy Apostles has been engaged in translating the Book of Common Prayer in the Hmong language,” says Vergara. “I would commend them in being our spokespersons for the Hmong as part of the total people of God.”

“Even in Laos, [the Church does] not have a Hmong ministry. Even in Southeast Asia, they are the most marginalized. I want to emphasize how significant it is that the Hmong community is being raised up and being developed. The Hmong youth are some of the most active in the Episcopal Evangelism Network. They should be proud of that.”

Preparing for the ceremony
A few days before the ordination, Toua Vang still did not have a chasuble or stole, which are needed for the ceremony. “They are important,” says Vang, “But I’m financially struggling and they are costly.” Some ordinands borrow a chasuble and stole for the ceremony, but Vang was having trouble finding any his size. So he sent out an email with a sweetly humorous plea: “Please help! I need a chasuble and stole, but I am a short Hmong man: I am only 5′ 2”, and everyone’s stole and robes are too long for me!”

Quickly, he received a response from the Rev. Beth Royalty, rector of St. Clement’s Episcopal Church in St. Paul. “Well, I’m a short white woman, and you can use one of my chasubles!”

The stole? The Rev. Susan Moss: the very person who had introduced the first person from his community to the original rector of Holy Apostles in the first place, has gifted him with her original set of stoles from her own ordination.

What’s next for Vang?
“I think the sense is that typically, priests don’t go back to their home congregation right away,” says Wilson-Barnard. “There is still formation that needs to be done, and it makes it hard when you go back to your own community and they think of you as who you were before.”

Vang will most immediately gain experience assisting at White Bear Lake, Minnesota, in a non-stipendiary curacy at St. John’s in the Wilderness Episcopal Church, working with the Rev. Mark Kelm, says Prior.

In the long term, Vang feels very passionately called to missionary work in Asia. “I understand that there is a need at Holy Apostles and within the Hmong community,” says Vang, and he fully intends to help fill that need. “But my passion is missionary work. I don’t know why, but maybe because of my experience with the French Missionaries who brought us the good news.

Vang remembers fondly three visits to Laos. “In villages I met small children that reminded me of my own life when I was a little boy back in Laos,” says Vang. “I love to do missionary work; I love to take the Gospel to those people in Thailand, Laos, and Vietnam in my future. I don’t know if that is possible; all I can do now is just keep praying and talking to people. I hope one day God will give me the energy, the power, the strength, and the wisdom to do the work.”

What this means for Vang
“If I could be able to describe or to put into words, I just want to thank everybody,” says Vang. “Thank all the generous and wonderful people that God has called to come into my life and walk with me in this challenging and joyful journey. I don’t know how to express it. It’s in my heart. It’s in my prayers. I don’t feel like it’s enough. Like I express it correctly. It’s a lot for me.”

What this means for everyone
“The Episcopal tradition really inspires Hmong Episcopalians,” says Vang, “because we felt like one family. We felt very supported and loved by the Episcopal Church as a whole. We never had that kind of love before when we were with the Roman Catholic Church, except for the French missionary priests who was with the missionary. That is a big blessing for us.”

“When we include the Hmong,” says Vergara, “we include everyone. When we gather, when we welcome and embrace all the marginalized people, we are embracing ourselves.

“There are so many people involved,” continues Vergara. “It takes the whole Episcopal village to really educate and realize a Hmong priest. Of course, more than that it takes Toua to put himself on the line with all the uncertainties of being employed as a Hmong. Now that he is ordained, he is not just a Hmong priest for the Hmong community; he is now a priest of one holy catholic and apostolic church. It is important for the church to see that. While he represents this underprivileged, marginalized community, he should also be seen as a priest of the one church.”

To learn more about why the Hmong are so marginalized in Asia and in the United States, and to read about their unusual experience as a cultural group without a nation; secret warriors for the United States in Laos, Cambodia, and Vietnam; then as refugees, then immigrants, go here.

— Haddayr Copley-Woods is missioner for communications for the Episcopal Church in Minnesota.