[Episcopal News Service – Seoul, South Korea] Korean Anglicans welcomed friends from across the communion Oct. 3 as they celebrated 125 years of ministry based in inculturation, mission and evangelism.

The festive Eucharist at the Cathedral of St. Mary and St. Nicholas in downtown Seoul drew an overflow crowd. Many people sat on blue stools in the courtyards outside Romanesque church watching the proceedings on three enormous video screens. Many wore blue paper visors that were handed out with the order of service booklets to shield themselves from a warm October sun. 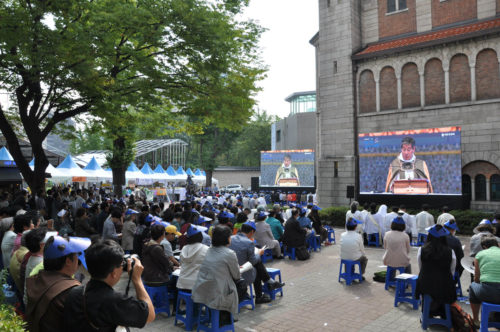 An overflow crowd listens to Seoul Archbishop Paul Keun Sang Kim, who is also the primate of the Anglican Church in Korea, preach Oct. 3 during the province’s 125th anniversary celebration Eucharist Oct. 3 at the Cathedral of St. Mary and St. Nicholas in downtown Seoul. Photo: Mary Frances Schjonberg/Episcopal News Service

A street fair of sorts lined one side of the lower courtyard. The cathedral’s Café Grace coffee shop under a large tree in that courtyard was open for business. The café is a mission of the cathedral that helps women refugees from North Korean get settled into society in the South. Communion was served to those sitting outside.

Inside the cathedral, bishops from across Asia and other parts of the communion, including The Episcopal Church joined the service, as did Korean clergy. The celebration took place during Episcopal Asiamerica Ministries international consultation that began here Sept. 30. Participants were among the hundreds of worshippers.

Those worshippers  sang traditional Anglican hymns in Korean as well as modern compositions. The music included folk instruments played by Koreans in traditional dress. The service was broadcast to those outside by CBS, a non-profit television station that features programming related to the Korean church and society. Cameramen on foot and with a crane caught different angles of every element of the two-and-a-half-hour service.

The Anglican Church of Korea traces its roots to Sept. 29, 1890 when Bishop Charles John Corfe, who had been ordained a bishop at Westminster Abbey, arrived with other colleagues at Incheon Port. Corfe began his work in the Seoul area, opening schools and medical facilities and other institutions such as orphanages. The church now has three dioceses, more than 200 priests, Sungkonghoe University, four religious communities and 60 social welfare centers. It has grown to more than 65,000 members in 120 parishes and missions. 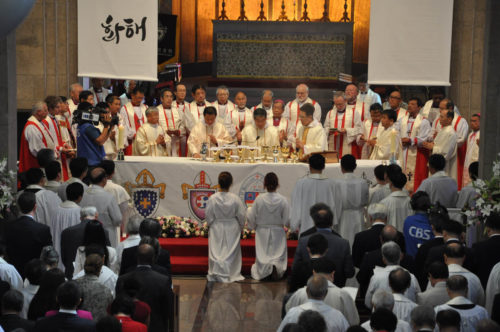 Seoul Archbishop and Anglican Church in Korea Primate Paul Keun Sang Kim prays the Eucharistic prayer during the province’s 125th anniversary celebration Eucharist Oct. 3 at the Cathedral of St. Mary and St. Nicholas in downtown Seoul. He is surrounded by bishops from across the Anglican Communion, including Presiding Bishop Katharine Jefferts Schori, second from left, and others from The Episcopal Church. Photo: Mary Frances Schjonberg/Episcopal News Service

From the beginning, Anglicans worked for the church to be integrated into Korean culture. Thus, while the Romanesque cathedral’s apse is filled with a golden mosaic crowned by an image of Christ, there are church buildings elsewhere that were constructed in the traditional Korean architecture. 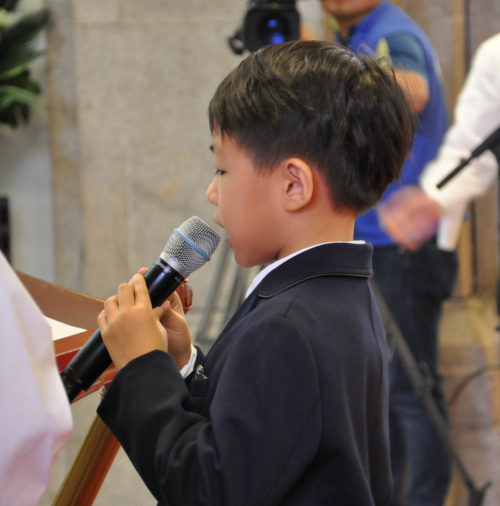 Christopher Chan-Young Kim, a young boy descended from the priest, read the Old Testament reading in Korean during the service. The reading, Isaiah 6:3-9, formed the theme of the service as Isaiah offered to preach God’s word, saying “Here I am; send me.”

This year marks 50 years since Korean bishops have led the Korean Anglican Church. Lee Cheon Hwan was ordained and consecrated in 1965, just 20 years after the country was liberated from Japan after World War II. The church became an independent province of the Anglican Communion in 1993. Archbishop of Canterbury Justin Welby sent anniversary greetings to the province that were read during the service by Church of England Diocese of Peterborough Bishop Donald Allister. Peterborough and the Diocese of Seoul have had a relationship since 2011.

Reconciliation is a theme for the province’s ministry and the anniversary Eucharist’s collect included a prayer that Korean Anglicans would “devote ourselves to the unification and reconciliation of the Korean peninsula.”

The service also featured a Korean-specific prayer for each of the Anglican Communion’s Five Mark’s of Mission. The prayer for the fourth mark (to transform unjust structures of society, to challenge violence of every kind and pursue peace and reconciliation) noted the sorrow of the peninsula’s division.

“Seventy years of our independence is also 70 years of our division,” the prayer said, noting that wounds from World War II “turned into ideological conflict” and “families lost their hometowns.

“We pray that our nation will become one, dance in an embrace, and worship and praise you even in North Korea,” the prayer concluded.

Archbishop Nathaniel Makoto Uematsu, the NSKK primate who has attended the EAM gathering in Seoul, told that group that Korean Anglicans “opened their hearts to us even before Japan had come to terms with and apologised for its role in the colonization of the Korean peninsula.” He said they “drew our attention to the inadequacies and errors of Japan’s historical awareness, they also opened the door to exchanges between individuals, churches, dioceses and at the provincial level.”