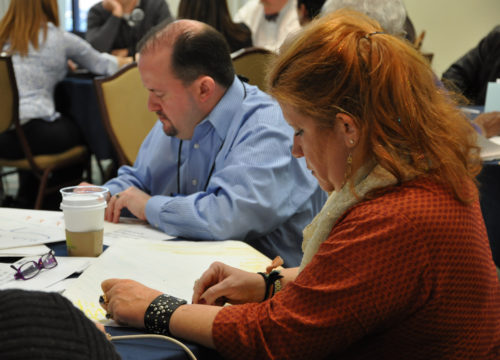 Episcopal Church Executive Council members the Rev. Dahn Gandell and John Johnson reflect on vision and mission questions Feb. 25 during an exercise meant to direct the council’s attention toward the process of formulating a proposed budget for the 2016-2018 triennium. ENS Photo/Mary Frances Schjonberg

The Rev. Canon Charles LaFond, council member from New Hampshire, led his colleagues in a 75-minute exercise that included silence, prayer and 12-minute blocks of table conversation. Council members changed tables for each conversation session so as to encourage a broad discussion as they were asked to consider two questions: “Where does God seem to be leading our church, and what are our hopes and dreams for the future [and] what actions and ministries would help us to realize those hopes and dreams?”  and “What is the appropriate role of the churchwide structure (as opposed to diocesan or local structures) in empowering these ministries and actions?”

The exercise came from a subcommittee created during the council’s last meeting by its Joint Standing Committee on Finances for Mission (FFM) to review the triennial process members have used to formulate a proposed triennial budget.

Members of the Joint Standing Committee on Program, Budget and Finance (PB&F), which receives Executive Council’s proposed budget, and the Standing Commission on the Structure of the Church were among those who served on the subcommittee, said the Rev. Susan Snook, a council member from Arizona who chaired the subcommittee.

Members of the 2009-2012 Executive Council were not entirely pleased with the budget process during that triennium. During their last meeting before the 2012 General Convention, they sent a memo of specific concerns to PB&F about their 2012-2015 budget document. In part, they said that a decision to schedule PB&F’s first meeting on the budget to begin the day after the council adjourned required them to agree “to a final document before the treasurer’s office had adequate time to draft the document for final review by Executive Council.”

Diocese of Ohio Bishop Mark Hollingsworth, FFM chair, had told the council in October that his committee agreed that the process needed to be changed, even though a special task force on the structure of the church no doubt would discuss budgeting issues. That task force met for the first time earlier this month. It is due to report to the wider church in November 2014 and to bring its recommendations to the 2015 meeting of General Convention in Salt Lake City.

However, Executive Council’s process of developing a proposed 2016-2018 budget must run concurrently with that group’s work because General Convention joint rule II.10.c.ii says the council must give its proposed budget to PB&F no less than four months before the start of General Convention.

Envisioning the future
Snook invited council members Feb. 25 to begin considering how to change the process by first “dreaming and visioning and praying about the future of the church – about our vision for the church.”

The council’s role in the General Convention’s budgeting process calls for it to propose a vision and mission for each triennium, she said.

“The first step is to figure out what we as the Executive Council believe to be the vision and mission of the church” in the 2016-2018 triennium, she said. The exercise was meant, not just to see “what we believe needed to happen, but to discern what God needed to happen,” she added.

Snook linked that exercise to the actual number-crunching of budget formulation, saying:  “No matter what else you say is your vision, what you put down on paper as the way you plan to spend your money expresses what your vision actually is.”

“We will not come to a concrete conclusion today about what the vision and mission of the church is,” she said. “This is the start of a three-year process of bringing a vision to birth.”

LaFond called the exercise “a Lenten way” of approaching such questions with “open searching and humble wondering,” using stillness as well as conversational reflection. Stillness, he said, is “sitting there receiving from the Holy Spirit.” Silence, he added, is often the space used for formulating a brilliant answer to a question.

“Some of you will find this [exercise] very enjoyable and meditative; others of you will loathe it and fight with it, desiring rather to produce something tangible or make a statement or publish a result,” LaFond said.

The FFM subcommittee has proposed a triennial budget process that will be discussed later in this meeting, said Snook, who suggested that the Feb. 25 exercise would prove helpful regardless of the shape of the process that council eventually chooses.

After the exercise, council members, staff and visitors celebrated Eucharist.

The Feb. 25-27 meeting is taking place at the Maritime Institute Conference Center.

Also on the council’s agenda:

The council spent the afternoon of Feb. 25 in committee meetings and also will begin Feb. 26 meeting in committees. A plenary session is set for mid-afternoon Feb. 26, during which members are scheduled to hear a report on the 15th meeting of the Anglican Consultative Council, an update on earthquake recovery in the Diocese of Haiti and a presentation on the future use of the Episcopal Church Center at 815 Second Ave. in New York. General Convention passed Resolution D016 during its meeting last July saying that “it is the will of this convention to move the church center headquarters” away from that building. On Feb. 27, the council will meet in plenary session to hear committee reports and to consider resolutions.

Executive Council carries out the programs and policies adopted by General Convention, according to Canon I.4 (1)(a). The council is composed of 38 members – 20 of whom (four bishops, four priests or deacons and 12 lay people) are elected by General Convention and 18 (one clergy and one lay) by the nine provincial synods for six-year terms – plus the presiding bishop and the president of the House of Deputies.