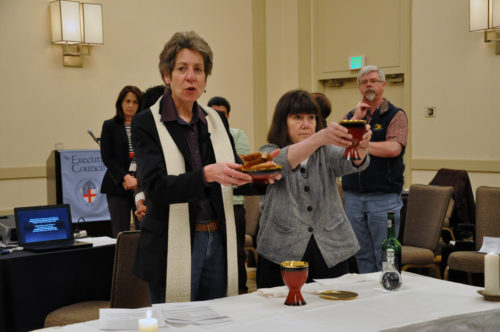 [Episcopal News Service – Salt Lake City, Utah] The Episcopal Church’s Executive Council wrapped up its work of the 2010-2012 triennium here on April 20 by discussing its on-going work against racism and issuing a memo saying that the proposed draft budget released to the church “is not exactly” the one it passed.

“We’ve tried to give a non-blame but descriptive, supporting document,” council member Fredrica Thompsett (Diocese of Massachusetts) told her colleagues in presenting the memo for their approval.

The memo says there are “potentially many explanations for the multiple errors in the document,” including “too many spreadsheets, too little time” and the “rapid discourse” involving two different budget proposals on the final day of council’s January session.

And, the council said, a decision to schedule the Joint Standing Committee on Program, Budget and Finance‘s meeting on the budget to begin the day after council adjourned in January required council to agree “to a final document before the treasurer’s office had adequate time to draft the document for final review by Executive Council.”

In its message to the church, council said that its “disappointment was not simply a reluctance to let go of the budget but instead a very clear statement that the budget sent to PB&F is not the budget council approved.”

“Rather than spend time assigning blame, council members moved fairly quickly to a discussion of how to rectify the situation within the confines of the canons,” the message said.

Presiding Bishop Katharine Jefferts Schori and House of Deputies President Bonnie Anderson said during a post-meeting press conference that the new process that council used to draft its proposed budget was not perfect. Yet, Jefferts Schori said, “it will open the traditional budget process to new ways of thinking.” And Anderson said “we have a process that allows for more input.”

Jefferts Schori noted during the press conference that the specific discrepancies council listed in its memo cannot now be corrected in the proposed draft budget. “They’re simply a reflection of council’s intent,” she said.

General Convention’s joint rules (II.10 10 (a) require council to give Program, Budget and Finance a proposed budget no less than four months before the start of convention. PB&F begins hearings on the budget on July 3 in Indianapolis, one day before the official start of the 77th meeting of General Convention. Neither council nor PB&F is allowed to change the budget document until that time.

Anderson said during her closing remarks to council that she has “great faith in the collective wisdom of the people of this church and I believe that General Convention can do what is necessary to begin our renewal.”

Council passed a number of resolutions at its three-day meeting dealing with racism, including one pledging itself to on-going anti-racism training. In its message to the church, the council said it had a “heated and passionate discussion” centered on “how we tease out the differences between anti-racism training and diversity and inclusion training.”

Racism, Jefferts Schori said during her closing remarks, “like all sin, has consequences that continue and our difficulties in talking about racism are simply an expression of some of those consequences. It will not be healed in this life, yet we are called to continue to wrestle with it.”

Executive Council closed its meeting with Eucharist. The Rev. Gay Jennings, a council member from the Diocese of Ohio whose term is ending, called on those she called “the servants of the church” to discern what they need to let go of so they can “grab on to something new and different that is life-giving and transformative.”

“What do we as a church need to embrace in order to be free and changed into His likeness from glory to glory?” she asked

“We need to remember that we are about the business of the restoration of creation, together. No more false choices between mission and governance,” Jennings said. “No more false wars between individuals or groups. No more jockeying for turf or power or control. Rather, we have to find ways to look forward together, and envision and incarnate the future God calls us to embrace — and I pray that we will throw ourselves into it with wholehearted abandon.”

The Executive Council carries out the programs and policies adopted by the General Convention, according to Canon I.4 (1)(a). The council is composed of 38 members, 20 of whom (four bishops, four priests or deacons and 12 lay people) are elected by General Convention and 18 (one clergy and one lay) by provincial synods for six-year terms, plus the presiding bishop and the president of the House of Deputies.