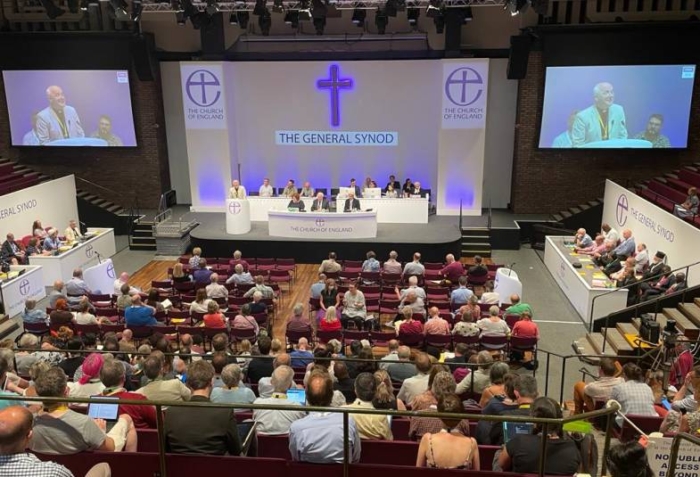 [Episcopal News Service] The Church of England’s House of Bishops has presented a proposal for liturgical blessings for same-sex couples, which – if approved – would be the first time the church has formally recognized gay relationships, though it would still ban same-sex church weddings.

The church announced the proposal on Jan. 18, one of the final steps in a yearslong process of debate and discernment over the church’s positions on LGBTQ+ issues. The details of the proposal will be released on Jan. 20 and it will be presented to the church’s General Synod – made up of the Houses of Bishops, Clergy and Laity – for approval when it meets in Feb. 6-9 in London.

The proposal likely will have implications beyond the Church of England, often referred to as the “mother church” of the worldwide Anglican Communion, though the church has no authority over the communion’s provinces, which include The Episcopal Church. As leader of the Church of England and ceremonial head of the communion, Archbishop of Canterbury Justin Welby’s support for the proposal may cause further tension with bishops from other Anglican churches who oppose same-sex marriage.

“This response reflects the diversity of views in the Church of England on questions of sexuality, relationships and marriage – I rejoice in that diversity and I welcome this way of reflecting it in the life of our church,” Welby said in the church’s press release. “I am under no illusions that what we are proposing today will appear to go too far for some and not nearly far enough for others, but it is my hope that what we have agreed will be received in a spirit of generosity, seeking the common good.”

According to the press release, the proposal would not change the church’s teaching that marriage is between a man and a woman, nor would it make any changes or additions to the rites of matrimony. Same-sex couples still would not be able to have a church wedding; however, they would be able to have their civil marriage or partnership blessed in a church service. (Same-sex marriage has been legal in England since 2014.)

The proposal “will offer the fullest possible pastoral provision” short of actual marriage by offering a range of liturgies called Prayers of Love and Faith, “which could be used voluntarily in churches for couples who have marked a significant stage of their relationship such as a civil marriage or civil partnership.”

The bishops will also propose revising the church’s rules for LGBTQ+ clergy, the church’s press release said, though it did not specify how they might change. The church currently allows clergy to be in same-sex relationships – and even civil partnerships – only if they commit to celibacy.

In addition, the bishops will also offer an apology to LGBTQ+ people, included in the full documents on Jan. 20, “for the ‘rejection, exclusion and hostility’ they have faced in churches and the impact this has had on their lives.”

The actions are the result of a six-year initiative called Living in Love and Faith, a process that started after General Synod reached an impasse on same-sex blessings and marriage in February 2017, when a report affirming the church’s opposition to same-sex marriage was rejected. The ensuing 6-year process aimed to produce a comprehensive review of the various perspectives, teachings and resources on LGBTQ+ issues in the church, involving working groups, surveys and studies. The 480-page Living in Love and Faith report was released in 2020 – along with a five-part video series, a podcast and other resources – launching the next phase of proposed actions.

Over the last year, several bishops have publicly called for the church to fully embrace same-sex marriage, notably including the Rt. Rev. Steven Croft, bishop of Oxford, who had previously opposed it. In a November 2022 essay, Croft, who identifies as a conservative evangelical, apologized on behalf of himself and the church for causing LGBTQ+ people spiritual pain by denying them marriage.

A 2022 survey of 1,165 English Anglicans conducted by YouGov for the Ozanne Foundation found that 55% approved of same-sex marriage.

Divisions over same-sex marriage boiled over at the 2022 Lambeth Conference. The conservative primates of three Anglican provinces – Nigeria, Uganda and Rwanda – refused to attend the conference, which welcomed married gay and lesbian bishops for the first time. Other conservative bishops from what is known as the Global South, where a majority of the world’s 85 million Anglicans live, particularly in Africa and Asia, said that one of their top priorities in attending the conference was to demonstrate official majority support for anti-LGBTQ+ stances on marriage and sexuality.

An initial document presented at the conference reaffirmed a 1998 Lambeth resolution opposing same-sex marriage.  After objection from some bishops, particularly in The Episcopal Church, the document was revised to state that there is not a consensus on same-sex marriage across the communion, and that churches have arrived at different conclusions through study and prayer.

However, bishops from the Global South Fellowship of Anglican Churches have suggested that acceptance of same-sex marriage will lead to “impaired communion,” and leaders of the three African churches that did not attend the conference have stated that they may leave the communion over such differences.

Last fall, in interviews with Religion News Service, bishops from Nigeria, Rwanda and Uganda said that a formal separation was becoming more likely, in part because of the actions of Welby and the Church of England, including the appointment of the Very Rev. David Monteith – who is in a same-sex civil partnership – as dean of Canterbury Cathedral in 2022.

The archbishop of Canterbury “is a symbol of unity” in the Anglican Communion, said the Most. Rev. Henry Ndukuba, primate of the Church of Nigeria, but “because of the way things are going, we are not tied to the apron of Canterbury.”

Members of the conservative Global Anglican Future Conference, or GAFCON, will discuss the developments in the Church of England at an April meeting in Rwanda, according to RNS.