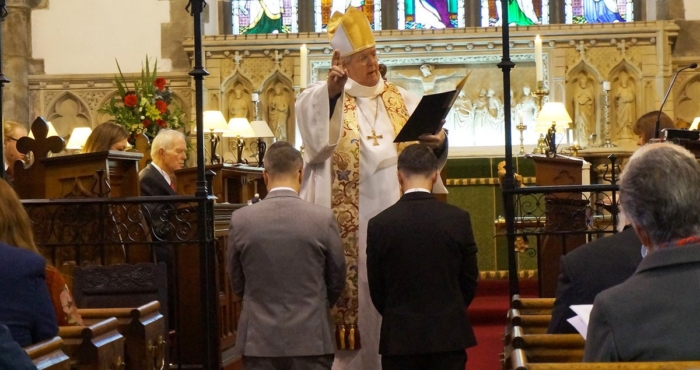 [Episcopal News Service – Canterbury, England] As the Lambeth Conference gets underway here, the status of same-sex marriage and LGBTQ+ inclusion in the Anglican Communion has unexpectedly taken center stage. Though the controversial statement saying the Anglican Communion “as a whole” rejects same-sex marriage has now been removed from one of the proposed “Lambeth Calls,” it has heightened the differences among the provinces on the issue.

Some bishops have spoken of a 1998 Lambeth resolution rejecting same-sex marriage as the “official teaching” of the Anglican Communion. However, the Anglican Communion is not one church but a group of distinct churches, known as provinces, and does not have a codified set of “official teaching[s]” beyond the Nicene and Apostles’ Creeds, except perhaps the Lambeth Quadrilateral. The Lambeth Conference is not a legislative body, and its resolutions (or, in this case, “calls”) have no binding authority.

Whatever happens at this 15th Lambeth Conference will have no direct effect on the same-sex marriage policies that each church has adopted. These practices vary widely across the Anglican Communion, which has 42 provinces covering at least 165 countries. The vast majority do not allow same-sex marriage, which is only legal in 32 countries.

Here is an overview of the few provinces (and, in some cases, dioceses) that do allow same-sex marriages and those that offer blessings to same-sex couples, and those where the status is unclear or disputed.

The Episcopal Church: Marriage, with limitations

The Episcopal Church was the first province in the communion to allow same-sex couples to marry, with General Convention approving a canonical change in 2015, days after the U.S. Supreme Court declared same-sex marriage bans unconstitutional. However, same-sex marriage is illegal in nine countries or regional jurisdictions where the church has a presence, including its largest diocese, Haiti.

In 2018, General Convention passed Resolution B012, under which a bishop can still formally reject same-sex marriage in their diocese but must then ask another bishop to provide any necessary oversight. Any priest or church can refuse to celebrate same-sex weddings – as St. Martin’s Episcopal Church in Houston, in the Diocese of Texas, The Episcopal Church’s largest parish, does.

In response to The Episcopal Church’s approval of same-sex marriage, a majority of Anglican primates voted to impose sanctions on the church for three years at their January 2016 meeting. However, the Anglican Consultative Council did not take action to impose the sanctions.

Scotland legalized same-sex marriage in 2014. In 2015, the Scottish Episcopal Church’s General Synod passed an initial vote removing gendered language from its marriage liturgy. It then voted to change its marriage canon in 2016 and approved it on second reading in 2017. The first Anglican same-sex wedding in the British Isles took place on Aug. 1, 2017, in Edinburgh.

At the October 2017 Primates Meeting, the church accepted the same set of “sanctions” that The Episcopal Church had faced the year before.

Brazil legalized same-sex marriage nationwide in 2013. The General Synod of the Igreja Episcopal Anglicana do Brasil overwhelmingly voted to change its canons to allow same-sex marriages in 2018. As with the Scottish Episcopal Church, gendered language had already been removed from the marriage liturgy.

Anglican Church in Aotearoa, New Zealand and Polynesia: Blessings, but not marriage

After receiving the proposals in 2016 and postponing a decision, the provincial synod approved a measure in 2018 that allowed bishops to decide whether to authorize blessings for same-sex partnerships or civil marriages in their dioceses. However, the measure also stated that “the Church’s teaching on the nature of marriage is to affirm marriage as between a man and a woman.”

After that decision, 12 parishes left the province and formed a new diocese affiliated with GAFCON, the global network of conservative Anglican bishops.

Church in Wales: Blessings, but not marriage

The liturgy will be used “experimentally” for five years. The current primate, Archbishop Andrew John, said in April that he believes marriages could happen within five years.

The church’s canons define marriage as the union of a man and woman. Because it is the state church of England, its canon law is part of English law. When same-sex marriage was legalized in England and Wales in 2013, the Church of England and Church in Wales sought exemption from the law on the grounds of their definition of marriage. As a result, both churches are legally prohibited from celebrating same-sex marriages unless their canons change.

Over the last few years, the church’s Living in Love and Faith initiative has compiled extensive resources summarizing the various perspectives on sexuality around the church. Forthcoming proposals based on the project are expected to go before General Synod in February 2023, when Living in Love and Faith leaders say the Church of England will “draw its own conclusions.”

Canada legalized same-sex marriage nationwide in 2005, the fourth country to do so, though individual Canadian provinces began legalizing it in 2003. The first officially sanctioned blessing of a same-sex partnership in the Anglican Communion seems to have happened in 2003 in the Diocese of New Westminster, based in Vancouver. Bishop Michael Ingham allowed parishes to bless same-sex relationships after the diocesan synod asked him to do so at three meetings.

Since then, the situation has become increasingly complex. Other dioceses also started allowing same-sex blessings, and some individual clergy were disciplined for celebrating same-sex weddings.

Church leaders have debated whether same-sex marriage is allowed under church canons. The canon on marriage does not define marriage or specifically prohibit same-sex marriage. In 2016, General Synod passed a measure changing the canon to allow same-sex marriage, meeting the two-thirds requirement in all three houses (bishops, clergy and laity). When the measure came up for the required second reading in 2019, it failed because the vote among bishops fell just short of two-thirds.

However, several dioceses had already been celebrating same-sex marriages by that point, and their bishops pledged that they would continue to do so.

In May 2022, General Synod rejected a resolution that would have approved same-sex marriage. However, it also narrowly rejected a resolution introduced by Sydney Archbishop Kanishka Raffel reaffirming the ban on same-sex marriage. After the vote, Raffel said the church is now in a “perilous position” with no denomination-wide agreement on marriage and suggested some parishes and dioceses might leave.

Since 2015, same-sex couples can legally get married across Mexico, though they must get a court order to do so in some states. However, Mexico only legally recognizes civil marriages, not religious ones.

Provincial canons and liturgy define marriage as between a man and woman, but in February 2022, the diocesan synod of the Diocese of Southeastern Mexico submitted a proposal to the churchwide synod to allow same-sex marriage. After it was referred to a commission for review, Bishop Julio César Martín said he would continue to advocate for same-sex marriage and hoped the measure would be brought before the next General Synod in 2025.

South Africa legalized same-sex marriage in 2006, the first (and, so far, only) African country to do so. Canon law defines marriage as between a man and a woman. In 2016, the churchwide Provincial Synod rejected a proposal to allow the blessing of same-sex relationships. Archbishop of Cape Town Thabo Makgoba said he was “deeply pained” by the outcome.

In 2018, the Diocese of Saldanha Bay’s Diocesan Synod passed a resolution calling for the blessing of same-sex civil unions.

In 2019, the synod received a report from a commission set up by Makgoba recommending that dioceses be permitted to bless same-sex civil unions for a three-year trial period, and referred it to dioceses “for reflection and study.”

Church of Ireland: No formal recognition

In 2017, General Synod narrowly voted down a proposal to develop a liturgy blessing civil same-sex marriages.

Some bishops have spoken in support of same-sex marriage, but in 2018, the House of Bishops said there is little consensus on same-sex relationships in the church and also little desire to change the existing definition of marriage as the union of a man and woman.

Where same-sex relationships are criminal

In most Anglican provinces, the issue of same-sex marriage is moot because it is illegal in their jurisdictions. In many, homosexual sex is even criminalized.

According to Human Rights Watch, there are currently at least 69 countries with national laws criminalizing same-sex sexual activity, including seven where it is punishable by death. The Anglican Communion has a presence – at least by jurisdiction – in most of these countries.

Correction: A photo caption in an earlier version of this story incorrectly described the ceremony taking place.