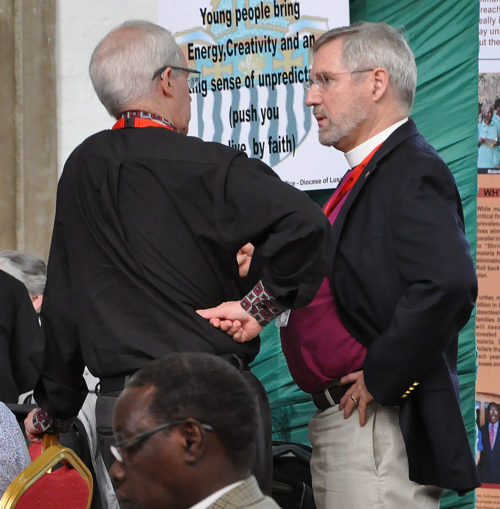 And the council declined to endorse or take any action similar to the primates’ call in January for three years of so-called “consequences” for the Episcopal Church. The primates’ call was in response to the 78th General Convention’s decision to change canonical language that defines marriage as being between a man and a woman (Resolution A036) and authorize two new marriage rites with language allowing them to be used by same-sex or opposite-sex couples (Resolution A054).

The primates had said that they were “requiring” that for those three years the Episcopal Church not serve on ecumenical and interfaith bodies, not be appointed or elected to an internal standing committee, and “that while participating in the internal bodies of the Anglican Communion, they will not take part in decision-making on any issues pertaining to doctrine or polity.”

The resolution was passed early in the session with no debate because it was placed on the consent calendar, a new approach for the ACC that allowed for a single up-or-down vote on all of the included resolutions. Another resolution, labeled C35, began the day on the consent calendar, was removed so that the council could discuss it and, as the afternoon session began and before it was discussed, was withdrawn from consideration. It was a one-sentence statement by which the ACC would have said it “welcomes” the primates’ communique.

Archbishop of Canterbury Justin Welby told the ACC that he would be “very glad” if C35 was withdrawn because C34 “covers the issues we need to cover.”

Welby went on to say that when he had met the previous day in Harare with Zimbabwe President Robert Mugabe, the notorious African leader had asked him about the communion’s stance on same-sex marriage. The archbishop said he told Mugabe that while Anglicans have “widely differing views … the majority opinion is that marriage is a lifelong union between a man and woman.

“And that the unanimous opinion of the primates’ meeting was that the criminalization of LGBTIQ people is entirely wrong.”

“I don’t think it would be fair to say that he entirely agreed with me,” Welby added.

Welby reminded the ACC that his report to them told how the primates dealt with a number of other issues of “absolute supreme importance” and that the ACC, as well, is “deeply committed” to issues such as evangelism, to opposing religiously based violence, to the care of refugees and to the work of climate change response.

In the future, Welby said, “When I talk to people I am going to be honest. Let’s never pretend that things are other than they are. We are not entirely united on the issues around human sexuality. We have profound and important divisions among us. It’s clear what has been the majority opinion among us. It’s also very clear that, when it comes to criminalization, that we are deeply committed to combatting that in every place where we find it and not supporting those who support it.”

Unlike recent ACC meetings when members began considering resolutions early in the gathering, ACC-16 saw 45 resolutions all presented on the last full day of the April 8-19 meeting at the Cathedral of the Holy Cross in Lusaka.

The April 18 sessions constituted the only formal business conducted at the ACC-16 meeting, other than April 15’s election of Hong Kong Archbishop and Primate Paul Kwong as the council’s next chair. On April 18 the members also elected Church of England lay member Margaret Swinson as vice chair and five representatives to the communion’s Standing Committee.

Summaries of all resolutions passed April 18 are here.