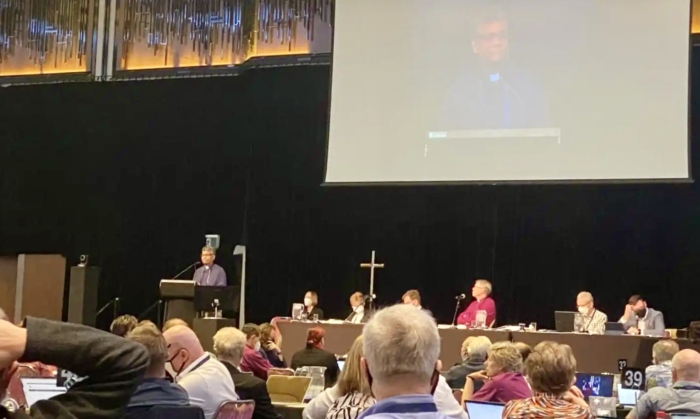 Sydney Archbishop Kanishka Raffel addresses the General Synod of the Anglican Church of Australia on May 11, 2022. Photo: The Melbourne Anglican (Diocese of Melbourne)

[Episcopal News Service] The Anglican Church of Australia appears to be on the verge of schism over whether to allow same-sex marriage, with the powerful Diocese of Sydney and a majority of clergy and lay delegates to its General Synod in opposition and the House of Bishops narrowly in support.

On May 11, General Synod – similar to the General Convention of The Episcopal Church – considered a resolution introduced by Sydney Archbishop Kanishka Raffel asserting that “the solemnization of a marriage between a same-sex couple is contrary to the teaching of Christ and the faith, ritual, ceremonial and/or discipline of this church.”

“Today, the majority of the House affirmed the teaching of Jesus on the subject of marriage and its expression in historic Anglican rites. That is why I am deeply disappointed that a majority of bishops voted against making a clear statement,” Raffel said in a statement after the vote.

The following day, delegates also rejected a resolution that would have approved same-sex marriage. The issue of same-sex marriage, which was legalized in Australia in 2017, has been a flashpoint in the Anglican Church of Australia ever since, with the Sydney diocese vocally against it. The conservative, evangelical diocese, which includes over 400 churches and dozens of schools, is the largest of the church’s dioceses.

It is associated with the GAFCON movement, a network of Anglicans around the world opposed to same-sex marriage. GAFCON Australia’s board of directors includes Raffel and the Rt. Rev. Richard Condie, bishop of Tasmania.

The Diocese of Sydney does not ordain women to the priesthood and has begun requiring new principals and directors of its school boards to sign a document stating that they believe marriage is between a man and a woman.

Before the General Synod vote, Raffel had warned that if the statement opposing same-sex marriage did not pass, then something was “fundamentally awry,” and he discussed the possibility of dioceses leaving the church.

Mentioning other Anglican churches that had faced schisms over same-sex marriage, Raffel told General Synod, “it has proved to be the case that when statements like this one have failed … then some Anglicans have found their conscience has not allowed them to continue fellowship.”

GAFCON-affiliated parishes in New Zealand followed leaders and left the Anglican Church in Aotearoa, New Zealand and Polynesia in 2018 after that church’s General Synod allowed bishops to permit the blessing of same-sex partnerships or civil marriages in their dioceses. In all, 12 parishes seceded and formed their own GAFCON-affiliated church. GAFCON’s Australia branch has threatened to do the same and has already set up a legal entity as a “lifeboat” for parishes or dioceses that decide to leave.

In a speech to synod after the House of Bishops’ veto of the statement opposing same-sex marriage, Raffel said the church is now in a “perilous position” with no denomination-wide agreement on marriage.

“In that case, we ought to stop wasting each other’s time by gathering this way and supporting these structures,” he said.

Correction: An earlier version of this story misstated the status of same-sex marriage in the Anglican Church in Aotearoa, New Zealand and Polynesia. The church has allowed bishops to authorize the blessing of same-sex partnerships or civil marriages, but they may not perform marriages.