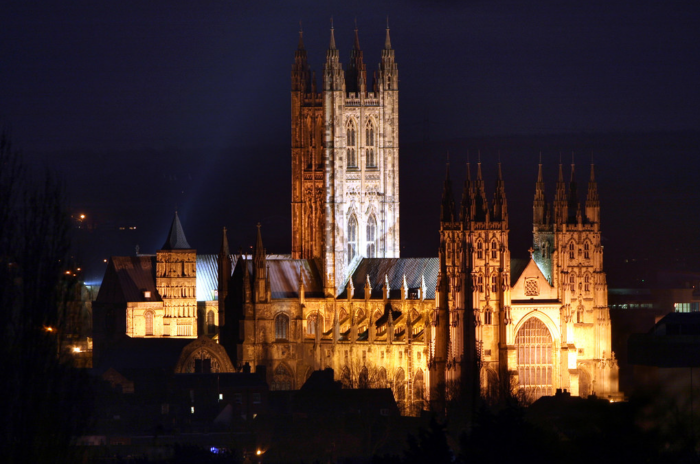 [Episcopal News Service] Over one hundred Episcopal bishops are heading to Canterbury, England, this week for the Lambeth Conference, where their professed goal of listening to and learning from the diverse global experiences of fellow Anglican bishops has been complicated by conservative Anglican bishops’ efforts to turn the conversations more narrowly toward disputed positions on same-sex marriage.

The Lambeth Conference of Anglican bishops typically is held once a decade at the invitation of the archbishop of Canterbury. This Lambeth Conference had been scheduled for 2020 but was delayed by two years because of the pandemic. It is the first to be called by Archbishop of Canterbury Justin Welby, who assumed that role in 2013. Bishops from all 42 provinces in the Anglican Communion were invited, and more than 650 bishops and 480 spouses were registered to attend as of last month.

Welby has sought to ease tensions over the Anglican provinces’ differing stances on human sexuality while focusing more broadly on the conference’s theme of “God’s Church for God’s World.” Welby also instituted a “Lambeth Calls” process for this conference in lieu of resolutions – partly in recognition that the Lambeth Conference is not a legislative body and has no jurisdiction over The Episcopal Church and the other autonomous Anglican provinces. Lambeth planners have described the calls as “short written statements that include declarations, affirmations and common ‘calls’ to the church and the world that the bishops want to make.”

Each call was developed by a drafting group that included bishops “representing Anglican churches from around the Anglican Communion,” according the Lambeth study guide. The 10 subject areas include discipleship, the environment, reconciliation and “safe church” principles.

When the study guide and drafts were released on July 18, the Lambeth Call on Human Dignity ignited a firestorm of criticism from Episcopal bishops over language that seeks to affirm a 1998 Lambeth Conference resolution opposing same-sex marriage. The bishops were further incensed to learn of an electronic voting process intended to help finalize the document.

Voting “will be a chance for each bishop to indicate their view,” the study guide explains, but with only two choices: “This Call speaks for me,” or “This Call requires further discernment.” A third option expressing disagreement was later added.

When ENS asked the Lambeth Conference for clarification about the process for developing and approving the Lambeth Calls, a spokeswoman said the study guide was intended to “help bishops prepare for discussions at the conference.”

Then, late in the afternoon on July 25, the Lambeth Conference issued a public statement acknowledging to concerns raised by the Human Dignity Call and said the drafting group “will be making some revisions.” The statement also said bishops will be given a third option in registering their views on each call: “This Call does not speak for me.”

Presiding Bishop Michael Curry, who will be attending his first Lambeth Conference as presiding bishop, alluded to the “rapidly changing” situation in a July 25 news release. In the release, Curry said the House of Bishops will gather in person on July 27 in Canterbury “to discern its way forward” before the conference begins. He also shared the text of an earlier message he sent to bishops offering specific guidance.

It will be Curry’s second Lambeth Conference, after he attended the 2008 as bishop of the Diocese of North Carolina. Curry told Episcopal News Service in a phone interview last week that he was hopeful this gathering would focus on common ground, following a model set within The Episcopal Church’s House of Bishops.

“We worked hard in our house and in our church on what has come to be called ‘communion across differences,’ where we seek to be in relationship with those we agree with and those we disagree with,” Curry said.

The focus on common ground was thrown into question by the draft of the Human Dignity Call. Jamaican Archbishop Howard Gregory is listed as the lead author. The call states in its introductory paragraph that it seeks “a reaffirmation of Lambeth I.10 that upholds marriage as between a man and a woman and requires deeper work to uphold the dignity and witness of LGBTQ Anglicans.” The Human Dignity Call also references the 1998 resolution among the draft “affirmations,” asserting it is “the mind of the Communion” to reaffirm a belief in the “faithfulness in marriage between a man and a woman in lifelong union” while advising against “legitimizing or blessing of same sex unions.”

Those provisions, which echo the demands of conservative Anglican bishops, make up only a small part of the Lambeth Call on Human Dignity, which also references the need for the Anglican Communion to confront its history of colonialism while addressing “the ongoing climate emergency,” working toward more just economic systems, alleviating poverty and standing “in witness against injustice.”

Before last week’s release of the draft calls, Welby already had faced a backlash from Episcopal bishops for his decision to exclude the spouses and partners of gay and lesbian bishops from his invitation list to this Lambeth Conference, a policy that affects the spouses of four Episcopal bishops: Maine Bishop Thomas Brown, New York Assistant Bishop Mary Glasspool, Missouri Bishop Deon Johnson and Michigan Bishop Bonnie Perry.

“I am very disappointed that the planners of Lambeth have chosen to include in the Call for Human Dignity a divisive and exclusionary clause that will cause not just spiritual pain, but further fracture within the Anglican Communion,” Johnson told ENS in a written statement. “We have worked hard to build relationships across differences and forge Christ-centered mission partnerships in the years since Lambeth 1998. My prayer is that we will be open to the movement of the Holy Spirit and move past division into true communion with compassion and hope.”

Johnson’s husband is not traveling to Canterbury, though Brown’s husband, Glasspool’s wife and Perry’s wife plan to be there. They will be excluded from Bible studies and other official spouse events but can attend public events, such as worship services.

It remains unclear why the reference to Lambeth’s 1998 Resolution I.10 was included in the Lambeth Call on Human Dignity. It was not part of the drafting group’s conversations, according to Toronto Bishop Kevin Robertson of the Anglican Church of Canada. Robertson, one of the gay, partnered bishops attending Lambeth, issued a statement July 24 disavowing that language in the Human Dignity Call.

“At no point in our meetings did we discuss the reaffirmation of Lambeth I.10 at the Conference, and it never appeared in any of the early drafts of our work together,” Robertson said in his statement, posted to Facebook. “I can confidently say that the Human Dignity Call in its current form does not represent the mind of the drafting group.”

The additional language, however, is closely aligned with the views voiced by a group of conservative Anglican bishops who are members of the orthodox Global South Fellowship of Anglican Churches. Rather than downplaying human sexuality as too divisive, they have stated that reaffirming the 1998 resolution is one of their top priorities while attending this Lambeth Conference.

South Sudan Archbishop Justin Badi, chairman of the group, underscored this in a July 5 written message and a July 7 video message. He called for reaffirmation of Resolution I.10 as “the official teaching of the Anglican Church on marriage and to call on provinces to align their faith and order accordingly.” An accompanying Global South Fellowship news release on July 7 states that such an action “will directly challenge the Episcopal Church of America” and other provinces that have authorized blessings and marriage rites for same-sex couples.

Connecticut Bishop Ian Douglas, in an interview with ENS on July 25, said he was dismayed by what appears to have been a late change to the draft of the Human Dignity Call. Douglas, formerly an Episcopal Divinity School professor, reported on the 1998 Lambeth Conference for the Episcopal journal “The Witness,” and in 2008 he was a member of the design team of that year’s conference before his own consecration as bishop in 2010.

In Anglican Communion reports, it’s not unusual to see “11th-hour additions after drafting committees have called it a day,” Douglas said.

“I’m chagrined that it’s happened, and now suddenly, as a result, so much of the discussion and the focus and the energy is on human sexuality.” Douglas also was a member of the 2022 drafting group for the Lambeth Call on Reconciliation and said he was never informed there would be an in-person voting process.

Los Angeles Bishop John Harvey Talyor, in a widely shared July 20 Facebook post, accused Welby and his planners of staging a “bait-and-switch Lambeth, with moderate and progressive Anglicans and Episcopalians about to arrive in Canterbury as credulous props for what is likely to be a majority vote against marriage equity.”

The Presiding Bishop also released a written statement on July 22 amid the growing uproar over the Lambeth Calls document.

“Our church is on record – both officially and in practice – with our commitment to the full inclusion of all who seek to follow Jesus and his way of love,” Curry said. “As we head to the Lambeth Conference, the same dedication leading us to the full welcome, embrace, and inclusion of LGBTQ+ children of God likewise commits us to communion with one another across our differences. We will be true to who we are while upholding our relationships and engaging in real and open conversation.”

Since 1998, The Episcopal Church has approved rites for blessing same-sex unions, and in 2015, its General Convention endorsed trial rites that could be used at wedding ceremonies for same-sex couples. A follow-up measure approved in 2018 sought to make those rites available to Episcopalians in every diocese where same-sex marriage is legal, regardless of the stance of the bishop.

The Episcopal Church “found a way through a gracious compromise on the issue of marriage equity,” Taylor said in a phone interview with ENS. He was consecrated as bishop in 2017, and this will be his first Lambeth Conference. Looking ahead to Canterbury, he and other Episcopal bishops have stressed the importance of building relationships with Anglican bishops, including those who may disagree on issues of human sexuality.

Episcopal bishops, however, are wary of appearing to endorse any anti-LGBTQ+ measure, Taylor said.

Episcopal bishops have joined Welby in stressing that the Lambeth Conference isn’t a legislative body. Its purpose is to bring together bishops from across the Anglican Communion to build relationships.

“This is an instrument of unity, and the reason to get together is to fortify that unity,” San Joaquin Bishop David Rice told ENS in an interview. He attended his first Lambeth Conference in 2008, when he was a newly consecrated bishop in New Zealand. The conference is “not about everyone agreeing,” he added. It’s about acknowledging differences while finding “some semblance of common ground.”

“My anticipation with regard to my colleagues in this [Episcopal House of Bishops] is we will engage graciously and honestly, and I can assure you that there will be no reaffirmation of 1998,” said Rice. Even so, “this conference has to be bigger than human sexuality. There are many other issues to discuss.”

Douglas agreed. “There are so many important conversations we need to and still will have to have,” he said. “This becomes a huge distraction from the important work we were planning to do. And frankly, that’s disappointing. It didn’t have to happen this way.”