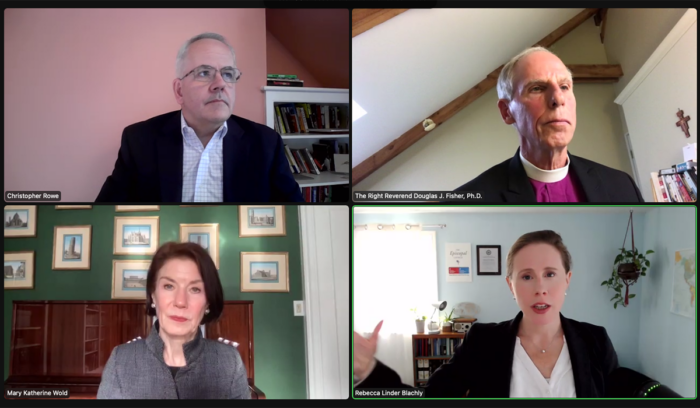 [Episcopal News Service] After General Convention establishes the social policy positions of The Episcopal Church, much of the church’s advocacy for those policies happens not in Sunday services but in the United States’ financial and political centers of Wall Street and Washington.

The church’s Washington-based Office of Government Relations works on behalf of General Convention to promote the church’s values in the halls of the federal government, while advocacy on the corporate level can take several forms, rooted in the church’s investment portfolio and the separate funds managed by Church Pension Group, or CPG.

“We oversee a large portfolio, and to the extent that we can, legally, and still carry out our fiduciary obligation, we also attempt to use that portfolio to advance the values of The Episcopal Church,” Church Pension Group CEO and President Mary Kate Wold said Dec. 5 in a CPG webinar on the church’s political and financial advocacy.

Video of the webinar can be viewed on Facebook and will be posted to CPG’s YouTube channel later this week.

The church and CPG take affirmative actions, the panelists said, by investing in companies that promote human rights, environmental sustainability, racial justice and solutions to poverty. And the church, by owning shares in publicly traded corporations, can join efforts to influence corporate decisions, such as through shareholder resolutions.

Western Massachusetts Bishop Douglas Fisher, who chairs Executive Council’s Committee on Corporate Social Responsibility, said during the panel discussion that the committee engages with companies “where we think we can have the biggest impact, and that varies from time to time.”

A notable recent success cited by Fisher was the church’s advocacy, alongside its interfaith and ecumenical partners, in favor of a measure that shareholders of gun manufacturer Sturm Ruger & Co. approved in June to pressure the company to study the lethality of its products and include the findings in a human rights impact report.

Wold and Fisher were joined in the CPG webinar by Rebecca Blachly, director of the Office of Government Relations, and Christopher Rowe, an investment team managing director who leads CPG’s socially responsible investing and shareholder engagement.

“This engagement can take many different forms,” Rowe said. “It can be Zoom calls, it can be letters, it can be in-person meetings with company management.” That is equivalent to the carrot approach, while proposing shareholder resolutions “is more of a stick approach, to bring a company to the table for dialogue,” especially on larger issues or when a company has not been responsive.

CPG, established as an independent nonprofit, provides financial services to Episcopal clergy and churches with oversight of a board elected by General Convention. Its Church Pension Fund has more than $17 billion in assets. Like Executive Council, CPG takes General Convention’s guidance into account when making investments, Rowe said. Areas of interest include human rights, labor relations, climate change and corporate board diversity.

That engagement with the corporate sector partly mirrors what the Office of Government Relations emphasizes in its nonpartisan work in Washington. It monitors legislation, coordinates with partner agencies and other denominations, develops relationships with lawmakers and encourages Episcopalians’ activism through its Episcopal Public Policy Network, or EPPN.

“There are certain issues that the federal government is uniquely equipped to address,” Blachly said, such as immigration reform. Her office also focuses on anti-poverty initiatives, environmental protections, human rights protections and efforts to combat racial injustice.

“We also look to what is moving and what is happening,” she said, and in the current lame duck session, before the new Congress is seated in January, her office and its partners are pressing for passage of bills that have a greater chance of passing now than they did before the recent midterm election. The Respect for Marriage Act, is one example, seeking to enact federal protections for same-sex marriage. Blachly also mentioned bills relating to Afghan refugees, wildlife protections and child safety.

Her office encourages Episcopalians to sign up for EPPN action alerts or to review the previous alerts archived on the office’s website as a first step toward helping the church engage with lawmakers on these issues.

“We are all as a church called to be agitating for transformative change,” Blachly said. “At the same time, I know that we also want to take incremental change when that’s what’s available to us.”

Fisher alluded to the many social justice resolutions passed at each General Convention. Those resolutions “are not just pious thoughts and prayers,” he said. Rather they empower the advocacy of Executive Council, the Office of Government Relations and Church Pension Group.

The Episcopal Church’s Finance Office manages a portfolio of investments that totaled nearly $500 million in market value as of the end of October 2022. Its corporate shareholder advocacy “is slow work,” Fisher said, but over time, it has notched some important victories, such as persuading hotel chains to train employees to recognize possible victims of sex trafficking.

The church also was a party to a significant victory in shareholder advocacy on gun safety in 2018 when Dick’s Sporting Goods announced it would stop selling assault-style rifles and wouldn’t sell other guns to anyone under 21. The company did not attribute the decision to the pressure applied by The Episcopal Church and its ecumenical partners, but Dick’s had been a target for such advocacy before its policy change.

“The reason that we’ve been more engaged with gun companies is because of the frustration of not getting anything done at the legislative level, at least at the federal level,” Fisher said. On the other hand, “now there seems to be some hope in Washington” after passage in June of the Safer Communities Act, which included some of the gun safety reforms that the Office of Government Relations and Bishop United Against Gun Violence have advocated.

The various church entities have different institutional roles, Blachly said, but they are aligned in their support of Christian values. Individual Episcopalians, too, should feel welcome to contribute in their own ways. “We hope people feel called to their area of ministry and their gifts and their strengths,” she said.