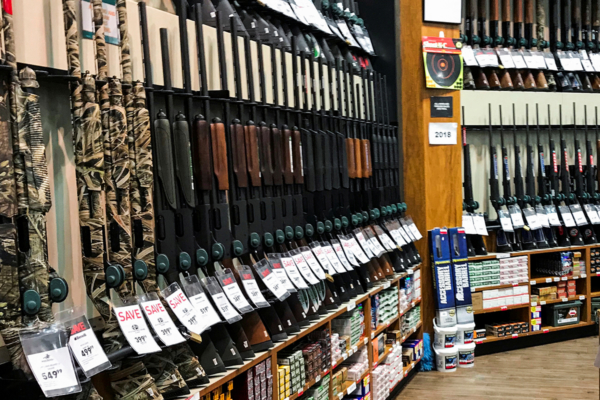 Guns for sale are seen inside of a Dick’s Sporting Goods store in Stroudsburg, Pennsylvania, in February 2018.  Sturm Ruger faces pressure to study the human rights impact of its guns after shareholders on June 1 passed a resolution. Photo: Reuters

[Episcopal News Service] The Episcopal Church on June 1 was part of a successful push by shareholders of gun manufacturer Sturm Ruger & Co. to pressure the company to study the lethality of its products and include the findings in a human rights impact report.

The measure was contained in a resolution approved by a majority of shareholders at Sturm Ruger’s annual meeting, held online. The Episcopal Church has invested in Sturm Ruger since late 2018 as part of its broader participation in shareholder advocacy campaigns on issues ranging from human trafficking to climate change.

“We co-filed this resolution because gun violence is a public health crisis in our country,” Western Massachusetts Bishop Douglas Fisher told Episcopal News Service by email after the vote. Fisher chairs Executive Council’s Committee on Corporate Social Responsibility. “We need to approach this crisis from many angles and one of them is inviting manufacturers to be part of the solution,” he said, citing the proposed human rights impact report as one example.

The church’s investment in gun manufacturers sparked some controversy after it was endorsed by a resolution passed in 2018 by the 79th General Convention. While some critics of the plan questioned whether the church should put its money behind companies whose products can be used to kill, proponents said it would give the church a seat at the table in gun safety discussions with the companies.

Once the church owns stock in a company, its advocacy is overseen by Executive Council through its Committee on Corporate Social Responsibility. The committee has relied on a document known as the Mosbacher-Bennett Principles for Investors in the Gun Industry, which was developed by the anti-gun violence group Do Not Stand Idly By. It recommends pressuring gun manufacturers to ensure responsible gun sales, improve gun safety, support crime-reduction activities and minimize the secondary gun market.

Sturm Ruger, based in Connecticut, had opposed the shareholder resolution calling for a human rights impact report, a measure initially proposed in 2019 by a Chicago-based nonprofit health system. It accused Sturm Ruger of failing to implement “meaningful solutions to address gun violence,” including misuse of its products.

“If we can move corporations, that is a really big leverage point for systemic change because of the money and power that corporate America really has today,” Laura Krausa, director of advocacy for the Roman Catholic nonprofit CommonSpirit Health, told The New York Times before the vote. Sturm Ruger, Smith & Wesson and Winchester are among the few publicly traded companies in an industry that the Times described as “largely privately owned and opaque.”

The Sturm Ruger vote came a little more than a week after 19 students and two teachers were killed by a gunman at Robb Elementary School in Uvalde, Texas. The rifle reportedly used by the 18-year-old shooter was made by a company called Daniel Defense.

The Episcopal Church is backing a similar shareholder resolution that likely will be up for a vote by Smith & Wesson investors at the company’s annual meeting in September.

The church also was a party to a significant victory in shareholder advocacy on gun safety in 2018 when Dick’s Sporting Goods announced it would stop selling assault-style rifles and wouldn’t sell other guns to anyone under 21. The company did not attribute the decision to the pressure applied by The Episcopal Church and its ecumenical partners, but Dick’s had been a target for such advocacy before its policy change.

In addition to the shareholder advocacy of recent years, the church has advocated at least since the 1970s for legislation seeking to reduce the risk of gun violence in the United States, and in the past decade, those and other gun safety efforts have been promoted churchwide by Bishops United Against Gun Violence and led in Washington by the Office of Governmental Relations. The push to pass new gun restrictions and safety measures routinely face insurmountable barriers in Congress, where pro-gun groups like the National Rifle Association have been successful in blocking them.