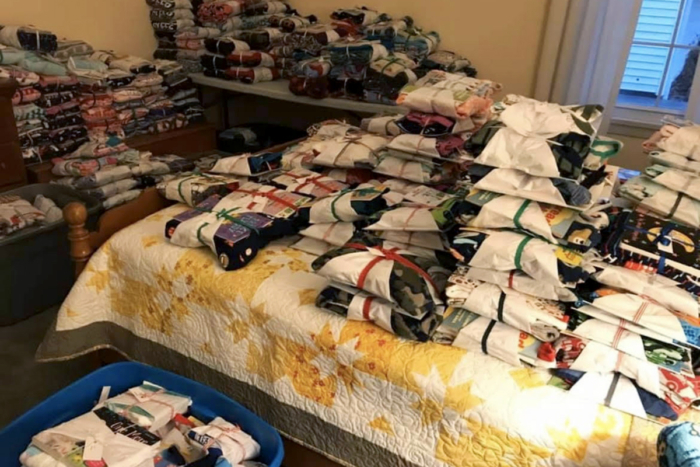 [Episcopal News Service] There’s a good way to tell it’s November in Oil City, Pennsylvania: Sarah Margherio has 437 sets of pajamas gift-wrapped in a bedroom of her home, and she’s not done yet.

“It kind of takes over my home for a while,” Margherio told Episcopal News Service this week.

As a longtime member of Christ Episcopal Church in the Diocese of Northwestern Pennsylvania, Margherio has been the driving force behind the church’s annual holiday pajama drive for the past 10 years. The idea was modeled after a national pajama program sponsored by the children’s book publisher Scholastic. Margherio prefers to organize her efforts locally, each year giving as many as 700 pajamas and accompanying books to kids through several elementary schools and community organizations.

“It’s a very, very economically depressed area,” she said. With about 50 active members, Christ Episcopal Church doesn’t let its size keep it from lending a helping hand. “For a very small-in-numbers church, we do a lot in the community.”

Many Episcopal congregations also follow the tradition of inviting parishioners to buy certain items of clothing for families in need around the holidays, to be distributed just before Christmas. In Oil City, Christ Episcopal Church has Midge’s Mitten Tree, to collect donations of cold-weather clothes.

The pajama drive is a more recent ministry, and it has expanded greatly since Margherio launched it in 2012 in this city of just under 10,000 people.

“It’s just been increasing since then,” said Mark Elliston, the vicar at Christ Episcopal Church, who also is Margherio’s brother. “We have people who love our program,” he said, so much that they sometimes shop post-Christmas sales just to get discounts on pajamas to donate for the following year’s drive. Other people give money for Margherio to purchase the needed pajamas.

Margherio, 70, prefers to buy all the books herself, typically at a discount through the vendors she used to work with as an elementary school teacher before she retired. She then spends much of November sorting and wrapping the gifts and storing them in her home until they are ready for distribution in mid-December.

Each year, she receives lists of ages, grades and clothing sizes of children whom teachers and school administrators have identified as needing help around the holidays. After collecting enough pajamas and books to fulfill those lists, she connects with Community Services of Venango County and a family services agency to distribute the rest of the gift-wrapped bundles.

During the first year, Margherio expected to get maybe 30 pajamas. Instead, with the help of local news coverage, she received enough donations to give more than 250 gifts of pajamas and books.

Now, people around the county, and even some from across the country, have made the Christ Episcopal Church pajama drive an annual recipient of their holiday giving, she said, including a group known as the Secret Santas, who anonymously donate $500 for the cause each year.

“It’s just amazing to me, the generosity of people,” she said.