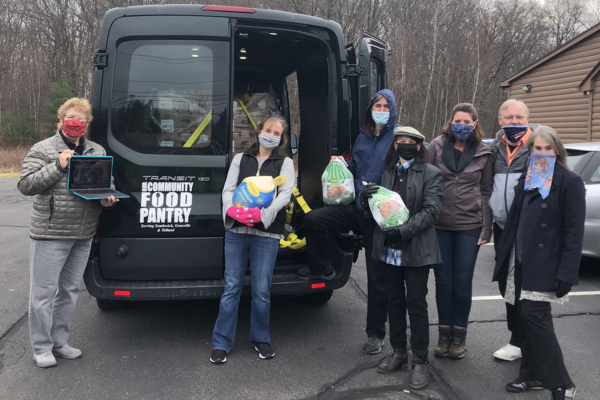 [Episcopal News Service] The coronavirus pandemic has forced ministries across The Episcopal Church to adjust to public health precautions, but that wasn’t going to stop Southwick Community Episcopal Church from saying prayers over hundreds of frozen turkeys this month.

“This has been such a tradition – we can’t just not pray over the turkeys,” said Cheryl McCarthy, senior warden at the Western Massachusetts congregation, which donated 310 frozen turkeys to community organizations to help furnish neighbors with a filling Thanksgiving dinner.

The holiday tradition of giving is one shared by other Episcopal congregations around the country. “Usually the week before the Thanksgiving pantry is one of the most exciting weeks at St. Matthew’s,” the Rev. Kelly Kirby, rector at St. Matthew’s Episcopal Church in Louisville, Kentucky, told Episcopal News Service. Instead of distributing frozen turkeys, this year the church gave away packages of turkey breasts and gift cards to more than 300 families.

And in the Diocese of Atlanta, St. David’s Episcopal Church collected nearly 300 frozen turkeys to donate to the nearby North Fulton Community Charities in Roswell, Georgia. The annual campaign both feeds those in need and strengthens relationships within the parish and the community, said Judy Hine, who serves as the church’s director of children’s ministry and coordinates the frozen turkey drive.

“I feel like God is working all things for good and will work to create new things when we reach out to one another,” she told ENS.

Underlying Episcopal ministries like these is an understanding that too many Americans are suffering from food insecurity, especially during the pandemic and its resulting economic downturn. The U.S. Department of Agriculture defines food insecurity as temporary or long-term nutritional deficiency brought on by poor quality, variety or desirability of diet, as well as more severe cases involving reduced food intake. 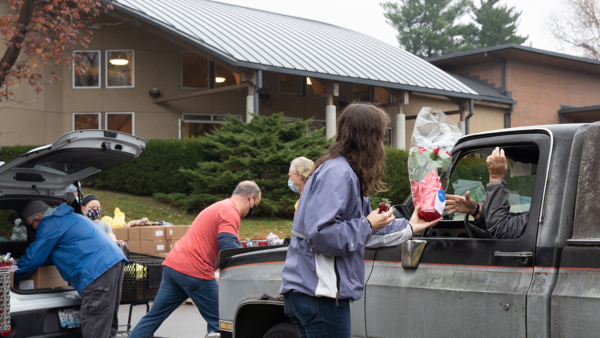 The demand for food at the pantry run by St. Matthew’s has remained steady this year, Kirby said. The Louisville congregation started its pantry 10 years ago, and “anyone who comes, we give food. We don’t ask questions.”

Previously, neighbors who received food were asked to volunteer with the pantry, but during the pandemic, the ministry has limited its volunteer opportunities to adults and children connected to the parish. Instead of coming in and choosing the food they want, recipients now can pick up boxes, filled in advance, through a drive-up service once a month outside the church.

The annual turkey distribution has “been a huge deal in the past,” Kirby said. Normally they have people waiting in the building while the food is distributed, filling the parish hall with conversation and good cheer, while someone plays holiday songs on the piano – a “spirit of togetherness” that wasn’t possible this year.

Instead, a smaller-than-normal volunteer crew gathered outside Nov. 21 to distribute 279 turkey breast packages provided by the Louisville Food Bank, and when those ran out, families received $15 gift cards to help prepare Thanksgiving meals at home.

Other than a few small worship services over the summer, “the parish has not been inside the building since March,” Kirby said. “The pantry continued on during the pandemic even when things were really shut down. I think it’s a source of joy for the congregation.”

In addition to supporting feeding ministries in their communities, Episcopalians are encouraged to get involved with The Episcopal Church’s support for systemic solutions to the problem of hunger, including through pending federal legislation. In particular, the church’s Washington-based Office of Government Relations emphasizes the need to bolster the Supplemental Nutrition Assistance Program, also known as food stamps.

“The Office of Government Relations recognizes and laments the food insecurity crisis faced by so many families as a result of the pandemic,” Rushad Thomas, a policy adviser with the Episcopal agency, said in an email. “We are advocating for a 15% increase in the maximum SNAP benefit in future COVID relief legislation, and we will continue to center the needs of food-insecure Americans, and particularly food-insecure children, in our conversations with federal lawmakers.”

The Episcopal Church has stepped up its financial backing of local feeding ministries as well, notably through its latest round of United Thank Offering grants. Nine of the 26 UTO grants awarded in October were given to ministries taking a variety of approaches to fighting hunger in their communities.

Episcopal clergy and lay leaders in some parts of the country also are helping to connect food producers who have unsold agricultural surplus with families in need of healthy food. The Diocese of Maine has served this year as a sort of intermediary between farmers and unemployed residents, with the help of federal COVID-19 relief money.

And in Pacific Palisades, California, the Parish of St. Matthew issued a call for donations to support a new nonprofit called the FarmLink Project, founded by St. Matthew’s Parish School alums who were home from college earlier this year because of COVID-19. Their idea was to connect farmers directly to food banks, and their team has grown to include more than 100 college students across the country. An estimated 15 million pounds of food have been delivered.

“In the midst of this pandemic, there is much to worry about and fear, and still much to be grateful for and hopeful about,” the Rev. Stefanie Wilson, assistant priest at the Parish of St. Matthew, said in a summer newsletter. “God’s infinite creativity is bubbling up as people right here band together to find local and global solutions to all kinds of problems.”

Southwick Community Episcopal Church’s Thanksgiving ministry is nearly as old as the church, which was founded 16 years ago just southwest of Springfield, Massachusetts, near the Connecticut state line. The congregation started by collecting and distributing turkey dinners for the holiday. Seven years ago, a community organization that serves families in Southwick and two neighboring communities asked for help with whole turkey donations to go with the Thanksgiving side dishes it was offering its patrons.

The Episcopal congregation shifted its efforts to collecting frozen turkeys. Parishioners bought the turkeys and dropped them off at the church, where they were arrayed on a tarp spread across the lawn. The congregation would bless the turkeys on the Sunday before Thanksgiving, and volunteers would form a line like a fire brigade to transfer the 300 turkeys to trucks for delivery to several other organizations in the area.

This year, to reduce the amount of close contact on distribution day, organizers encouraged donations of money, which the church used to buy the turkeys. “This year we bought smaller turkeys, knowing that people wouldn’t be able to have large gatherings,” McCarthy, the senior warden, told ENS.

They also spread distribution across two Sundays, Nov. 15 and 22, partly to reduce the number of volunteers needed. And rather than laying the turkeys out on the lawn, the frozen birds went right into the truck – to be prayed over and then delivered. 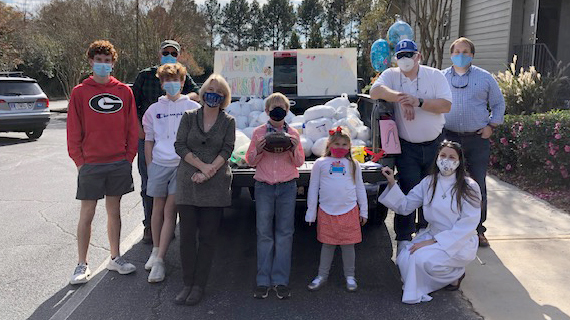 The frozen turkey drive at St. David’s in suburban Atlanta has a similar backstory. Seven years ago, the congregation was engaged in discernment: “What is our role? What can we do as a community for our neighbors?” said Hine, the children’s ministry director. Parishioners served a free Thanksgiving meal that year, but the following year, representatives from North Fulton Community Charities advised them of a greater need, to help families celebrate Thanksgiving at home.

“What they said they needed was frozen turkeys,” Hine recalled. “At first, it didn’t really capture my imagination, but what was important was the people doing the work said, ‘This is what our families need.’”

So for the past six years, St. David’s has rallied its parishioners and the community to contribute to its frozen turkey drive – one of several ways the congregation supports North Fulton Community Charities each year. Turkey drop-off days were Nov. 18-20, and the turkeys were loaded into a big freezer at the church.

“Families literally pulled up, and in the back of their car there were a half-dozen turkeys rolling around in the back seat,” Hine said.

Parishioners also could drop off turkeys in the morning on Nov. 22, if they were attending the outdoor Sunday worship service at the church. By noon, volunteers had loaded the last of the turkeys into the back of a pickup truck for delivery.

“St. David’s is a very generous parish, and it gives us a way to express our gratitude in a tangible way,” Hine said of the ministry. “It’s that focus on coming together that can be hopeful and healing.”