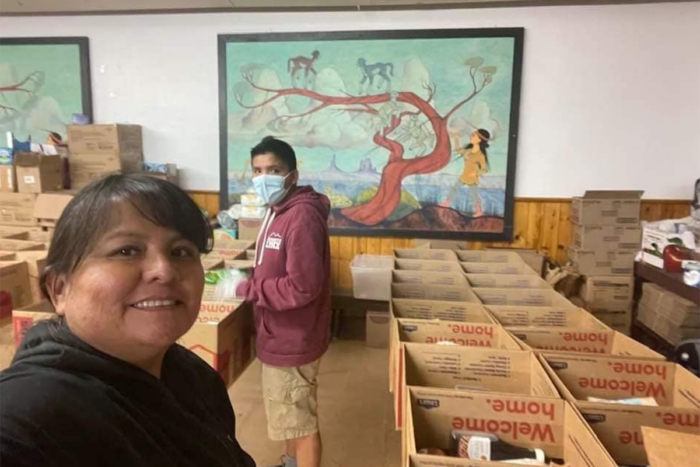 Genevieve White and her son, Ryan, volunteer at Good Shepherd Mission in Fort Defiance, Arizona, to fill boxes of food for delivery to Navajo Nation residents as part of a feeding ministry of the Episcopal Church in Navajoland. Photo: Leon Sampson

[Episcopal News Service] Last year, the Episcopal Church in Navajoland launched an emergency feeding ministry to help families weather the turbulent early months of the COVID-19 pandemic. After a summer 2021 hiatus, the ministry is resuming – just in time for Thanksgiving.

Episcopal leaders serving the Navajo Nation gathered with volunteers Nov. 18 at the mission’s headquarters in Farmington, New Mexico, to sort a final shipment of food items and load them onto trucks to take to Navajoland’s three regions. The food then was divided further into individual portions for distribution to about 300 families last weekend and this week.

Among the items: turkey, potatoes, dressing and pie for the families’ Thanksgiving dinners on Nov. 25.

“This is really about getting the food and resources to those who need the most,” the Rev. Joe Hubbard, vicar at St. Christopher’s Mission in Bluff, Utah, told Episcopal News Service. Elders and families with small children are among the ministry’s priorities. The Thanksgiving week deliveries contain enough food for families to “get them through the holidays, and we’ll have another distribution in December,” in time for Christmas, Hubbard said.

Navajoland leaders had conducted similar monthly food distributions for about a year, starting in May 2020. More than 3,800 boxes of food, as well as clothing, hygiene items and toys, were provided to families in 25 communities, including more than 1,650 children, according to a Navajoland summary. Those deliveries were put on hold in May 2021 “in hopes to save some money to help families during the holiday season,” G.J. Gordy, Navajoland’s communications director, told ENS.

The winter months often are the most economically difficult for Navajo families, Gordy said, because the growing season is over and families face the added cost of buying firewood or propane to heat their homes. With the feeding ministry resuming, “we’re hoping to continue this for the next six months.” 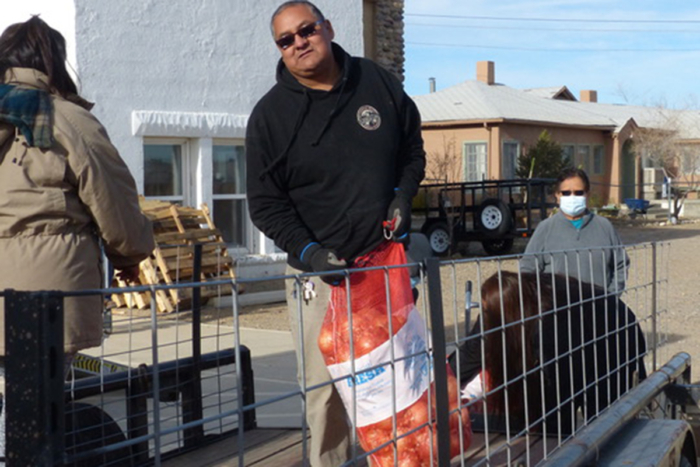 The Rev. Leon Sampson helps load a trailer with food on Nov. 18 to be boxed and delivered to Navajo Nation residents. Photo: G.J. Gordy

The deliveries this week were made possible in part by donations of nonperishable foods from the Utah-based Church of Jesus Christ of Latter-day Saints, known widely as the Mormon church. Other food was purchased directly from wholesaler Sysco, with help from the monetary donations that Navajoland continues to receive from around The Episcopal Church.

“We have been blessed with just an outflowing of love from the wider church, with donations that have allowed us to purchase the food,” Navajoland Bishop David Bailey told ENS. “There’s not enough words to say thanks.”

That financial support was especially welcome in the months after the March 2020 start of the pandemic, when the rate of COVID-19 transmission on the Navajo Nation reservation was among the highest in the United States. More than 1,500 Navajo Nation residents have died during the pandemic. Daily cases have risen again this fall, though not as high as last winter, and 58% of residents are now vaccinated.

“So many people have lost loved ones and friends and family members to this virus,” Hubbard said. “We’re seeing that this virus is not going away.”

The reservation covers more than 27,000 square miles in the Four Corners region of Arizona, New Mexico and Utah. More than 30% of households lack running water, and many of the 175,000 residents live below the poverty line in isolated villages far from the nearest grocery store.

The Episcopal Church created the Navajoland Area Mission in 1978 by carving out sections of the dioceses of Rio Grande, Arizona and Utah, in an effort to unify the language, culture and families of the region. The churchwide triennial budget now includes a $1 million block grant to support Navajoland.

“The Episcopal Church Office of Development continues to partner with the Episcopal Church in Navajoland to support fundraising efforts for core operations and essential ministries,” Cecilia Malm, the office’s associate director, told ENS by email. “Development staff provide professional consultation in areas such as annual giving, major gifts and endowment fundraising and encourage support for Navajoland through social media and other communications channels.”

For the week of Thanksgiving, the food assembled by Navajoland leaders was divided to feed about 100 families in each of the mission’s regions. All Saints’ Episcopal Church in Farmington was used as the operation’s Nov. 18 staging ground, and food for the San Juan region in New Mexico was distributed from there on Nov. 21. A no-contact process was established, with volunteers placing boxes in the backs of recipients’ vehicles due to the region’s elevated COVID-19 case count.

The boxes included a mix of canned goods and other nonperishable items, as well as fresh produce and meat. “We really wanted to make sure people had turkey and fixings for Thanksgiving,” the Rev. Jack Chase, the priest serving the region, told ENS.

Chase praised Gordy’s work in coordinating the food distribution. “She really is the engine behind it all, the one who makes it happen,” he said.

In Navajoland’s southeast region, based in Fort Defiance, Arizona, the Rev. Leon Sampson and volunteers finished packing and delivering boxes of food to far-flung families on Nov. 22.

“It’s not that we’re expecting them to come to church, to be Episcopalians,” Sampson told ENS. “We’re showing them that God is still in the midst of them.” Sampson also planned to cook turkey dinners for delivery on Thanksgiving to about five families who do not have the means to cook the meals themselves.

Many families in the Utah region, in and around Bluff, lack fresh water plumbing and are receiving gallons of drinking water with their food boxes. Hubbard, church volunteers and a 10-member crew from AmeriCorps worked together to deliver nearly 300 boxes of food, or four boxes per family, on Nov. 19 and 21 to the Utah communities served by St. Mary’s in the Moonlight Church in Oljato and St. John the Baptizer Church in Montezuma Creek. Among the nonperishable items were staples like rice, dried beans, flour and sugar. More boxes are being distributed this week.

Going forward, the distributed boxes will contain about enough food to assist families for two weeks, Gordy said. Navajoland also is raising money to help Navajo Nation families pay to heat their homes during the winter.