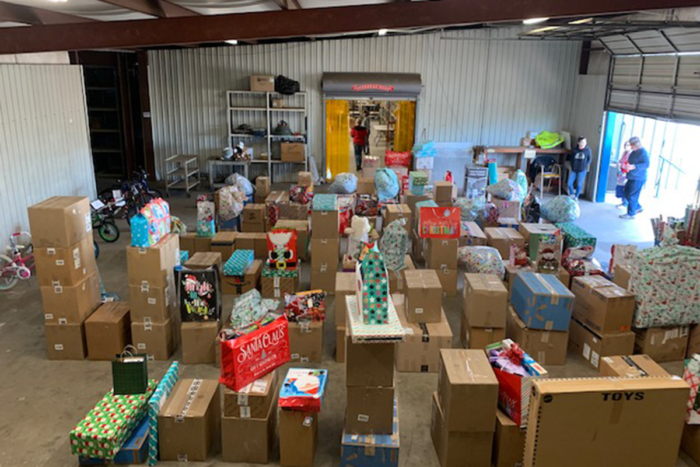 Boxes of presents await distribution at a warehouse in Marshall, Texas, where the Empty Stocking Fund has been bringing Christmas cheer since 1914. Photo courtesy of Lea McGee

[Episcopal News Service] If Santa ever runs into trouble on his way to Marshall, Texas, the good girls and boys of Harrison County know their stockings still will be full on Christmas, thanks to a century-old gift-giving campaign with Episcopal roots.

Since 1914, the Empty Stocking Fund has collected toys and raised money for additional Christmas gifts for local children whose families may not be able to afford them. The toy campaign now serves more than 300 children each year, and donors never fail to brighten the season for every one of them, said Lea McGee, the Empty Stock Fund’s director and a member of Trinity Episcopal Church in Marshall.

Harrison County, with a population just under 70,000, borders Louisiana just west of Shreveport. Marshall is its largest city. “Empty Stocking is just something this town has grown up with for generations,” McGee told Episcopal News Service. “It’s just something that’s widely supported, and I don’t even have to do much soliciting.”

Some donors choose to sponsor the hundred or so children who are listed anonymously with their present requests on the fund’s online “Angel List.” Others give money, which volunteers use to fulfill the rest of the requests. Most of the children are ages 12 and younger, and each provides suggestions for the categories “Need,” “Want” and “Wish.”

Trinity Episcopal Church has long supported the campaign, by donating toys and providing McGee with an office across the street. She starts stacking toys there after Thanksgiving, and they later are brought to an empty warehouse in town to be sorted into boxes for each family. This year, Dec. 19 was the date when parents could come pick up their boxes, including extra wrapping paper for any gifts that hadn’t yet been wrapped by Empty Stocking Fund volunteers.

“We always make sure they get their ‘need,’” McGee said, such as coats and shoes. “And we, of course, try to give them what they want, and we try to grant their wishes.” A “want” might be a modest-sized toy, like a Barbie doll or Hot Wheels cars. A more expensive toy, like a bike or a tablet, is classified as “wish.” Even if a child doesn’t receive the “wish” gift, Empty Stocking Fund assembles at least five or six presents, as well as a stocking filled with small items and a toothbrush and toothpaste.

“I want to do what I can for them at Christmas time,” McGee said.

Many communities have holiday gift-giving charities, and many congregations, like Trinity Episcopal Church, encourage their members to buy toys and other presents for children in low-income families. One quality that distinguishes the Empty Stocking Fund is its longevity and its leadership stability. In 107 years, McGee is only the fourth director.

It was founded in 1914 by Elizabeth Scully, identified in an online history as a grocer’s daughter who “noticed how many families came in the store that were in need of help.” She later handed the leadership reins to the Rev. Henry Selcer, rector of Trinity Episcopal Church, who was involved in the annual toy drive until his death in 1956.

Ora McGee, the grandmother of Lea McGee’s husband, had volunteered with Selcer and became the Empty Stocking Fund’s third director. “She told him and promised him on his death bed that she would never let Empty Stocking die,” Lea McGee said.

Now 60 years old, McGee sometimes wonders if it’s time to find someone else to take over for her, but every fall she is back interviewing participating families, emailing donors, searching for toy discounts, coordinating volunteers and working with local organizations interested in conducting toy drives for the Empty Stocking Fund. “It’s just something I love to do,” she told ENS.

In addition to the donated toys, McGee estimated that the fund raises $25,000 a year to ensure the children receive at least some of their “needs” and “wants.” “The community is just so behind it. They make my job easier.”