[Episcopal News Service] Episcopal Church leaders, facing increasing concerns about the risk of COVID-19 outbreaks at the 80th General Convention, will convene a special meeting of Executive Council on May 11 to discuss safety precautions for this summer’s churchwide gathering.

Executive Council will meet at 9 a.m. Eastern May 11 on Zoom, according to information shared online May 5 by the House of Deputies. The special meeting was called, under a rarely used provision in the church’s Canons, by six members of Executive Council, including the chairs of the governing body’s four standing committees.

The purpose will be to discuss “public health and pastoral protocols and procedures that should be in place for General Convention attendees and the relative merits of meeting in Baltimore,” according to the House of Deputies’ post.

The 80th General Convention initially had been scheduled for 2021 but was postponed for a year because of the pandemic. It now is set to take place July 7-14 in Baltimore, Maryland. Masks and proof of vaccination will be required of all attendees, and church leaders continue to consider additional precautions as necessary.

Some of those who are scheduled to attend General Convention, however, have expressed apprehension in recent weeks over the plan to meet in person at such a large churchwide gathering, which also serves as the meeting of the church’s primary governing body.

This week, in a blog post shared widely on Twitter, the Rev. Megan Castellan, a priest in Ithaca, New York, argued that holding an in-person General Convention would be “a huge mistake.”

In which I unearth the blog to discuss some life and death stuff that shockingly isn't abortion, but is instead General Convention. https://t.co/Vo2Uk5k3P4

The Rev. Scott Gunn, a deputy for the Diocese of Southern Ohio and executive director of Forward Movement, shared Castellan’s blog post and echoed her concerns.

“If you are a deputy or bishop in the Episcopal Church, read this and ponder,” Gunn said on Twitter. “Does it really make sense to have #gc80 in person? Should we do it online this time?”

👇 If you are a deputy or bishop in the Episcopal Church, read this and ponder. Does it really make sense to have #gc80 in person? Should we do it online this time? https://t.co/wuV7cHtDBM

The Rev. Nurya Love Parish, a priest and deputy in the Diocese of Western Michigan, also shared Castellan’s blog post on Twitter. “This is a compelling argument that the #Episcopal Church should not gather this summer for General Convention, and is worth attention,” Parish said.

This is a compelling argument that the #Episcopal Church should not gather this summer for General Convention, and is worth attention. https://t.co/34AOlVS87M

Several members of Executive Council raised their own concerns during their April 20-23 meeting in San Juan, Puerto Rico, about the propriety of holding General Convention in person at a time when the coronavirus, though greatly diminished from its winter peak, is still circulating widely. In the past month, new subvariants have begun pushing case counts in higher in the United States, though hospitalizations and fatalities have remained relatively low. Some council members also noted the dangers of long COVID and the increased risk to older people and those with underlying health conditions.

The Rev. Gay Clark Jennings, president of the House of Deputies, responded at that time by saying the General Convention Office continued to prepare for a range of public health scenarios while planning for the in-person gathering in Baltimore. The Joint Standing Committee on Planning and Arrangement, meanwhile, is expected soon to release a set of guiding principles it will follow in responding to the evolving coronavirus threat. The church’s presiding officer also have met with public health experts on additional risk mitigation steps, and Executive Council approved $50,000 for a public health expert to advise Jennings on policies and procedures.

The potential risks of a large in-person gathering were underscored when at least eight people, including Jennings, tested positive for COVID-19 after attending the Executive Council. About 60 council members, staff and visitors had attended the meeting in San Juan, while some of the council’s 40 voting members attended online. 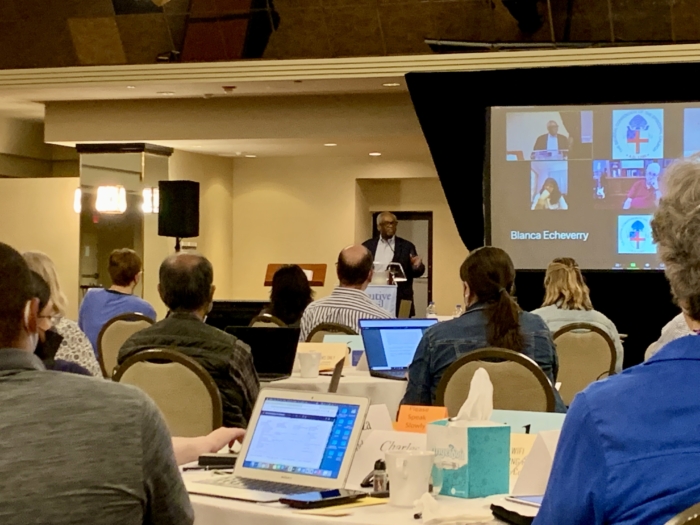 Separately, news that at least 41 people in the Diocese of Pennsylvania tested positive for the virus after attending a clergy conference last week has fueled additional anxiety among church leaders over COVID-19 risks. The Pennsylvania clergy reported mild symptoms, and none were hospitalized, according to a letter to the diocese from Bishop Daniel Gutiérrez.

As a bicameral governing body, General Convention splits its authority between the House of Bishops and House of Deputies. General Convention typically meets in a different city every three years and is a hub for legislative activity, networking and fellowship. Hundreds of bishops and deputies attend, as well as thousands of church staff members, representatives of church-affiliated organizations, vendors and observers.

The one-year postponement has allowed committees to hold some meetings and hearings online for the first time; the hearings are now ongoing. Holding hearings online also has helped the church achieve its goal of reducing the triennial gathering’s duration from 10 to eight days.