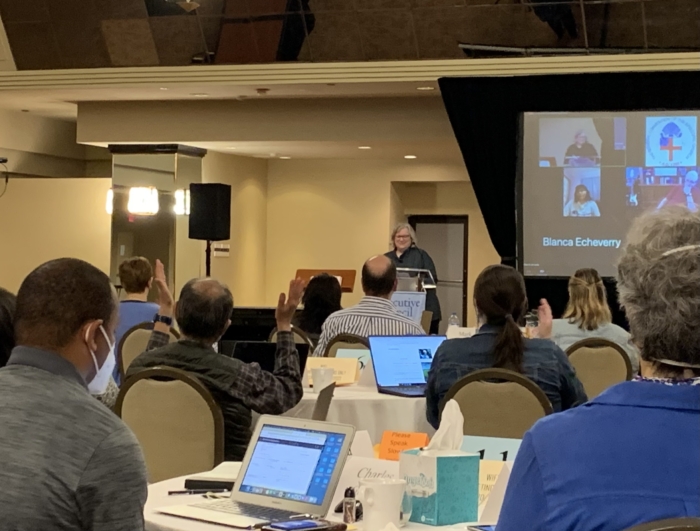 [Episcopal News Service] The Rev. Gay Clark Jennings, president of the House of Deputies, tested positive for COVID-19 after returning from the April 20-23 Executive Council meeting in San Juan, Puerto Rico. Jennings wrote in a Facebook post on the evening of April 26 that she had tested positive that morning and was experiencing mild symptoms.

Jennings, 71, wrote that she is quarantining at her home in Ohio and that her husband, who also attended the meeting, has tested negative. In an email to those who attended the meeting, Jennings said she initially felt no symptoms and got tested only because she was going to visit someone who is more vulnerable to infection.

“I’ve spent today being in touch with people with whom I’ve spent time in the last few days, and with those with whom I was scheduled to meet in the coming days,” Jennings wrote. “I give thanks for the masks, vaccines and antiviral treatments that are saving so many lives at this stage in the pandemic, and I urge everyone who is eligible to get vaccinated and boosted so we can all stay safe.”

All council members, staff and reporters attending the meeting in person were required to show proof of vaccination (and booster shots, if eligible) when registering, but not negative COVID-19 tests. In addition, all were required to wear masks at all times unless addressing the council and/or its committees, or while eating. Lunch and dinner were served to all in a hotel conference room each day of the meeting (except the final day, for which only lunch was served).

Puerto Rico experienced a surge that coincided with the council meeting, reporting the highest infection rates of any U.S. state or territory last week.

The 80th General Convention, scheduled to take place July 7-14 in Baltimore, Maryland, was postponed a year due to the pandemic. On the meeting’s third day, several council members raised concerns about the safety General Convention, given the continued emergence of COVID-19 variants, the large numbers of people attending, the danger of long COVID and the increased risk for older people and those with underlying health conditions.

Jennings responded to those concerns by saying the General Convention Office has been planning for a range of scenarios relating to safety at General Convention. The Joint Standing Committee on Planning and Arrangements is developing a set of guiding principles that will be used to make decisions, which will be released to the church shortly, she said. Jennings and the other presiding officers have met with three public health experts to discuss risk mitigation, she said. She also requested the ability to contract with a public health expert to advise her on policies and procedures as General Convention approaches, and council approved a resolution allocating up to $50,000 of the 2022 budget’s surplus for that purpose.