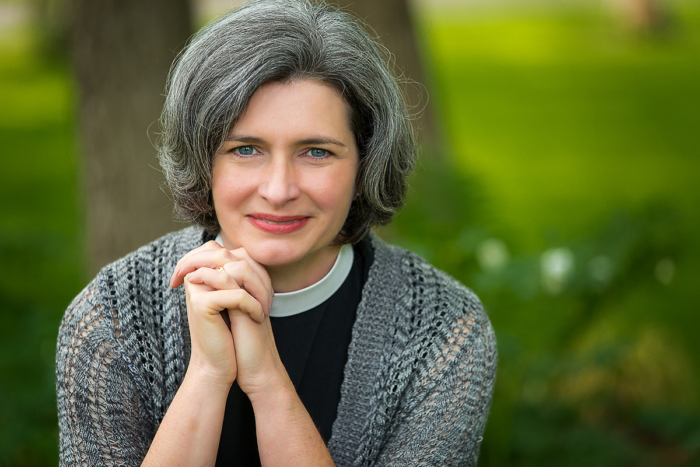 The Rev. Nurya Love Parish is rector of Holy Spirit Episcopal Church in Belmont, Michigan, and executive director of Plainsong Farm & Ministry, both located in the Diocese of Western Michigan. Photo: Rachael Holt

[Episcopal News Service] Start talking with Episcopalians about food and faith or reading about new ways to worship, and the Rev. Nurya Love Parish’s name is likely to come up. She’s written the book “Resurrection Matters” and been interviewed by Civil Eats, and she imagined her own Good News Gardens program last year almost simultaneously with The Episcopal Church’s.

Love Parish, who grew up questioning the ecological wisdom of her Las Vegas, Nevada, home, began her ministry career in the Unitarian Universalist church. In 1997, that work took her to Michigan, where she’s lived since. An Episcopal priest since 2011, she’s rector at Holy Spirit Episcopal Church in Belmont and executive director of Plainsong Farm & Ministry in Rockford, which she co-founded in 2015 with Bethany and Mike Edwardson — Bethany serves as artist-in-residence, Mike is farm manager.

Located in the Diocese of Western Michigan, Plainsong Farm & Ministry serves as a nexus of sustainable agriculture and Christianity. Its offerings include a community supported agriculture program, a young adult cohort and monthly worship (currently suspended due to the pandemic). It’s also home to ChurchLands, an initiative dedicated to mapping The Episcopal Church’s properties and encouraging people to think about them with sustainability in mind.

“We struggle in America to articulate a Christianity that is about ecology, justice and health,” Love Parish told Episcopal News Service. “I hope the Christian food movement can help the wider public recognize that Christianity can be about these things.”

The rest of ENS’ interview with Love Parish has been condensed and edited into the Q&A below.

ENS: Is your work what you imagined it would be when you were younger and thinking of your career ahead of you?

Love Parish: No. It started to be my vision in the early 2000s. By then, I had read Wendell Berry, and I knew that there was something that hadn’t happened yet with agriculture and Christianity in the contemporary world. I didn’t know what it was, but I felt like there was a gap there, and it was interesting.

ENS: What do people need to know about Plainsong Farm to be able to picture it in their minds?

Love Parish: My husband and I bought the house that is where Plainsong Farm is now in 2001. It’s now 12 acres, two houses, two big barns and a repurposed chicken coop. Before I met Mike and Bethany, it had become clear to me that God was calling me to begin a farm-based ministry. It had also become clear to me that my husband and I were not the farmers. Mike and Bethany hoped to start a farm that would connect them to the church, and Mike wanted to be the farmer. I was always clear that the ministry would be connected to The Episcopal Church, and also that it would be ecumenical. And a lot of the things I imagined would happen have happened. I thought, “Maybe someday we could have a young adult program.” Well, we have one. “Maybe someday we could have a community of discipleship that gathers outside.” We have that. “Maybe someday we could have an impact on The Episcopal Church’s use of land and how The Episcopal Church sees land.” We’re doing that.

ENS: Demographically, who is drawn to Plainsong Farm & Ministry?

Love Parish: It’s the youngest average age I’ve seen in 20-something years of ministry. We’re also pretty white. People descended from European settlers who aren’t actively engaged in agriculture often romanticize it. I hope that what we are doing will get people in touch with the realities of eating food.

ENS: Some years ago you asked yourself if there was a Christian food movement. How do you answer that question today?

ENS: How do you describe the movement?

Love Parish: It’s people who are integrating discipleship, ecology, justice and health through food and agriculture. A lot of Christians — including the ones at the church that I serve — want to feed people because Jesus tells us to feed people. The invitation of the Christian food movement is for all Christians to consider how our feeding ministries can also serve the health of people and planet. Younger generations recognize that the health of people and planet are the same. When they can practice that as a life of faith, that’s intriguing. So I think this is going to grow.

ENS: How did ChurchLands come to be?

Love Parish: In 2018, Plainsong Farm, with some funding from The Episcopal Church, worked with Greenhorns to create what I think was the first gathering of land access professionals and religious leaders. And we identified a need for ongoing work in the area on an interfaith basis. In 2020, ChurchLands hosted a cohort for Episcopalians, integrating Bible study and action learning goals, with education about The Episcopal Church’s history around land and future possibilities around land. That cohort experience is one side of ChurchLands.

The other side is inventory and mapping work. At that initial gathering of religious leaders and land access professionals, I realized that I didn’t think The Episcopal Church knew what land it had. So I proposed resolution D053 to General Convention in 2018. I thought that Church Insurance would have information about The Episcopal Church’s land, but they don’t. Ultimately, the responsibility of finding that information came back to me. By then, I had met Emma Lietz Bilecky, and she had an interest in land and ministry and understood GIS [geographic information system software] and mapping. Last year, we did a pilot project helping dioceses in Arkansas, Indiana and Washington state understand their landholdings using public data. We learned that there’s a need for more work in this area because Christianity has not appropriately valued and honored land.

ENS: How does this movement fit into the culture of The Episcopal Church right now?

Love Parish: Discipleship ministries that integrate food and agriculture have found a life in The Episcopal Church that seems to be more supported than in other denominations. A big part of that is the work of Jerusalem Greer and [the Rev.] Melanie Mullen with the Good News Gardens program, and Brian Sellers-Petersen who wrote “Harvesting Abundance.” Their work prepared people’s minds to understand that this is part of the work of discipleship. I anticipate that we will close a lot of churches in the next 20, 10 years. But because of the way we hold land, we will still — I hate to say it this way — own property. When congregations close, their properties will become available for new ministry. As the climate crisis worsens, the world will need centers for resilience, renewal, hope and action, and I don’t know why our church properties can’t be that. That includes agriculture, but it also includes biodiversity preservation, and it includes a shift in our culture as humans and how we see our place in creation. God didn’t make us to be destroyers. God made us to be tenders of life.