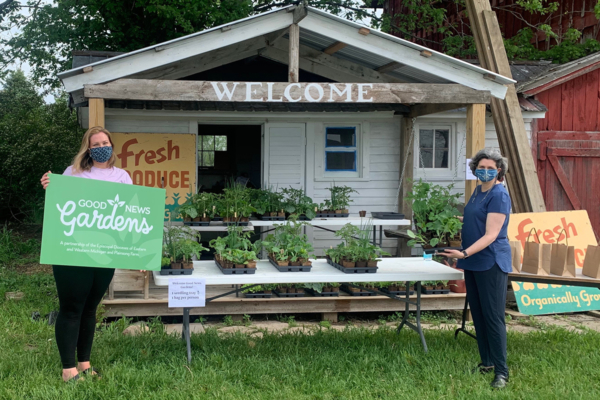 [Episcopal News Service] The Holy Spirit works in mysterious ways and in all kinds of vehicles – even Katie Forsyth’s rented Dodge Grand Caravan. With its back seats folded down for expanded cargo space, the minivan was enlisted this week for a two-day, thousand-mile delivery run as Forsyth ferried seedlings and garden kits across the dioceses of Eastern and Western Michigan.

About 20 congregations, including three ecumenical partners, have committed to planting vegetables as part of Good News Gardens, a new initiative of Plainsong Farm in Rockford, Michigan. The farming ministry, about 15 miles northeast of Grand Rapids, also received a grant from Heart of West Michigan United Way to offer Good News Gardens’ seedlings and kits to up to 25 individuals in Kent County. 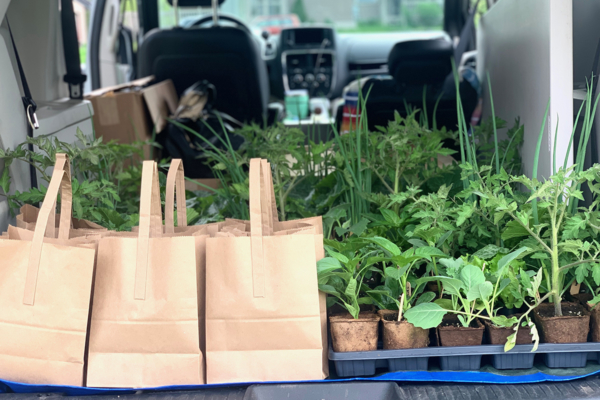 Seedlings from Plainsong Farm were taken this week by minivan to participants in Good News Gardens around Lower Michigan. Photo: Plainsong Farm

The farm and the two Episcopal dioceses organized the gardening initiative this spring on short notice, partly in response to economic disruption caused by the coronavirus pandemic, which has resulted in 40 million unemployment claims nationwide and exacerbated existing inequalities.

“My sense is that we are headed to economically uncertain times, and it would be wise for us to be mindful to ensure as much equitable access to healthy food as we can,” the Rev. Nurya Parish, an Episcopal priest and executive director of the farm, told Episcopal News Service.

Parish also is advising churchwide officials as they grow a broader gardening movement that follows The Episcopal Church’s call to creation care and evangelism. This week, the church launched a Good News Gardens website that encourages all Episcopalians to take up gardening as a spiritual discipline and a form of discipleship.

“It’s not just about the dirt,” the Rev. Melanie Mullen told ENS. “It’s about this relational, prayerful act.” Mullen serves as the church’s director of reconciliation, justice and creation care. “There’s a connection between caring for Earth and the way you care for people.”

Mullen’s office teamed up with Jerusalem Greer, the church’s staff officer for evangelism, to develop the churchwide Good News Gardens movement. It invites participants to commit to planting, praying and proclaiming, including on a new Agrarian Ministries group on Facebook. Those who sign up on the website also receive newsletters intended to help deepen their engagement with the spirituality of gardening.

Even a window box with flowers is a way of sharing, by adding beauty to the neighborhood, Greer said. Gardeners also can use the herbs they grow in their baking and then share what they’ve baked with neighbors. And they can donate fresh produce to local food pantries and food banks, where demand has surged since the United States was hit in March with escalating outbreaks of COVID-19, the disease caused by the coronavirus.

Food inequity was a problem before the pandemic, Mullen said, but “this COVID crisis has just unmasked and unearthed how intense and severe it is.”

The increased severity was clear to church leaders in the dioceses of Eastern and Western Michigan, which have been led together by Bishop Whayne Hougland Jr. since 2019. Hougland began discussing food access and security issues with Forsyth, who serves the dioceses as canon for evangelism and networking. Forsyth was aware of several congregations already involved in gardening ministries, and others had land that could be put to similar use.

“Using our properties, knowing that we have these assets that are just sitting there that could be used to further the kingdom of God … it clicked,” Forsyth said by phone May 27 when ENS caught up with her as she was finishing her seedling delivery rounds.

Putting church properties to fuller use has been an ongoing focus of Parish’s ministry at Plainsong Farm. She founded the farm with farmers Mike and Bethany Edwardson, and while Plainsong’s outdoor worship services in the summer are ecumenical, it has received financial support from The Episcopal Church, including through its church planting grants.

This year, with a Roanridge Trust grant, the farm launched a pilot program called ChurchLands aimed at helping congregations become better stewards of their properties. Fifteen congregations in 12 states signed up for the yearlong program, which kicked off with a two-day in-person session at Plainsong Farm in January. Participants are keeping in touch throughout the year as they receive guidance in land conservation, sustainable agriculture and Gospel-inspired development of church properties.

Parish also previously served on The Episcopal Church’s Advisory Council for the Stewardship of Creation. As a deputy to the 79th General Convention in 2018, she proposed a resolution that was adopted calling for an inventory of church-owned properties to identify opportunities for expanding creation care ministries.

“When we as a church don’t even know what land we have, we don’t know if we can make a difference,” she told ENS.

Mapping church-owned properties is a gradual, ongoing process, whereas Good News Gardens came together quickly this spring as congregations signed up to participate. Plainsong Farm grew the seedlings and has been coordinating distribution, with help from the farm’s summer program manager, Emily Ulmer, a seminarian at Western Theological Seminary in Holland, Michigan.

Plainsong Farm is in Kent County, which includes Grand Rapids, Michigan’s second-largest city at about 200,000 people. Farm volunteers are distributing seedlings this week to participants within the county. As they do, they are wearing masks and taking other precautions to reduce transmission of the coronavirus.

Some congregations and individuals have elected to pick up their seedlings at the farm. Holy Trinity Episcopal Church, in the southern Grand Rapids suburb of Wyoming, was already in planting mode by May 27, when it posted a video to Facebook showing parishioners tending to the congregation’s raised garden beds.

For the participants outside of Kent County, they waited for Forsyth and her rented minivan.

On May 26, she pulled in at Plainsong Farm, and she and Parish loaded up the back with seedlings. Forsyth’s first day mainly covered deliveries to churches in Western Michigan. Representatives from each participating congregation met Forsyth at prearranged drop-off locations that were convenient for her travels. She, too, wore a mask and never handed the seedlings directly to recipients, so that distancing guidelines could be followed.

On May 27, she filled up at the farm again and drove around Eastern Michigan before finally turning west for her final drop-off location, in the parking lot of St. Mark’s Episcopal Church in Paw Paw, west of Kalamazoo.

“I can tell you, this van smells pretty good,” Forsyth said.