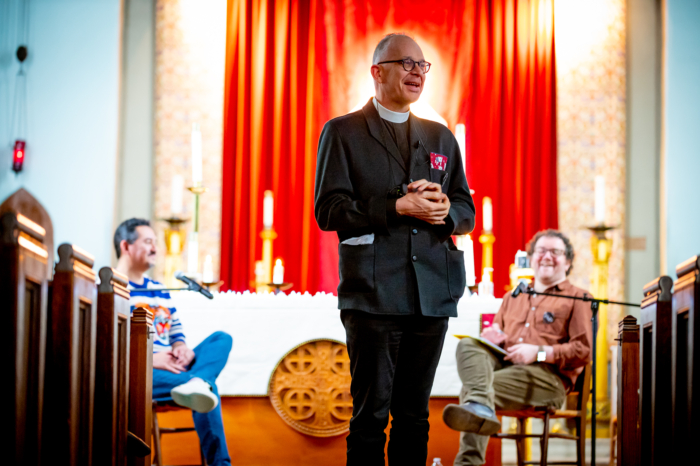 [Episcopal News Service – New York, New York] St. Mark’s Episcopal Church in the neighborhood of Jackson Heights, Queens, hosted an all-day program of poetry and music earlier this month marking the coincidence of Lent and National Poetry Month. Part of the Red Door Series created by the Rev. Spencer Reece – an accomplished poet and St. Mark’s priest-in-charge – the event featured readings from 11 poets, discussions, a musical performance and a communal blend of poetry and liturgy.

The Red Door Series – named for the familiar hallmark of many Episcopal churches, including St. Mark’s – has brought a ritual of creative meditation to the church since Reece started it in the fall of 2020. Curated by Reece and several other local poets, the series brings a poet to the church every Wednesday evening, when they read a poem, followed by 10-15 minutes of silence, and then read the poem a second time. It harkens back to the ancient tradition of lectio divina, an ancient practice of reading Scripture contemplatively.

“Poems are like icons to meditate upon,” Reece told Episcopal News Service.

Reece, who has published two critically acclaimed poetry collections, a prose devotional and a memoir, took over leadership of the parish seven months after the death of the previous rector, the Very Rev. Antonio Checo, who died of COVID-19 at age 67. For the Red Door Series, he has recruited some literary stars to read alongside neighborhood poets. Richard Blanco, who performed a poem at President Barack Obama’s second inauguration, Pulitzer Prize winner Gregory Pardlo, memoirist Nick Flynn and former New York State Poet Laureate Marie Howe are among the 50 or so poets who have read at the church.

For the recent April 7 event, in recognition of both Lent and National Poetry Month, Reece put together a program that built on the existing Red Door formula and added more elements. From noon to 4 p.m., a different poet performed every half-hour, reading a poem twice, interspersed by periods of silence. Some had come from as far away as New Orleans, Louisiana, travel made possible by a grant that the program received from the Diocese of Long Island.

“I thought it would be a good way to just see what would happen if we took it to another level,” Reece said. “It just seemed organic, after 50 poets coming through the door, to celebrate it.”

Attendees of all ages filed in and out throughout the rainy afternoon – over 100 in total, Reece estimated – as poet after poet stepped up to a lectern in front of the altar to read their work, much of which referenced the themes of Lent either implicitly or explicitly. 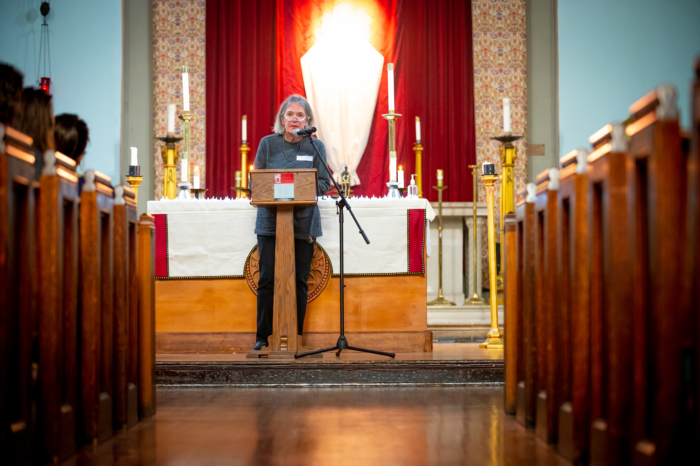 Diane Glancy, who is of partial Cherokee descent, read her poem “Holy Week at the Mission School” (at 41:12 in the video above), which references the experiences of Native American children in boarding schools run by the U.S. government and some churches. Spoken in the voice of a Native child at one of these schools, the poem simultaneously shows traditional culture being erased and a sense of spiritual restoration through the crucifixion of Jesus. Glancy said she wanted to acknowledge the physical abuse and forced assimilation that happened at these schools, but also “at least put in one word for the help that it was to some of the Native people.”

Glancy told ENS about how the poem came to be, and the connection between Holy Week and the Native boarding school experience.

“These ideas just kind of drift through your mind and sometimes they catch and sometimes they don’t,” she said. “What haunts me – I just had this imaginary mission [school], St. Agabus. I don’t even know if there is a real one. [I wondered] what it would be like for a Native person to see Christianity from their own point of view – that Christ is something like a buffalo, who provided all the needs, from the tepee to the food to medicine, whatever. The buffalo was the big provider and to see Christ in those terms, to see Christ in Native terms, which is a great interest of mine.” 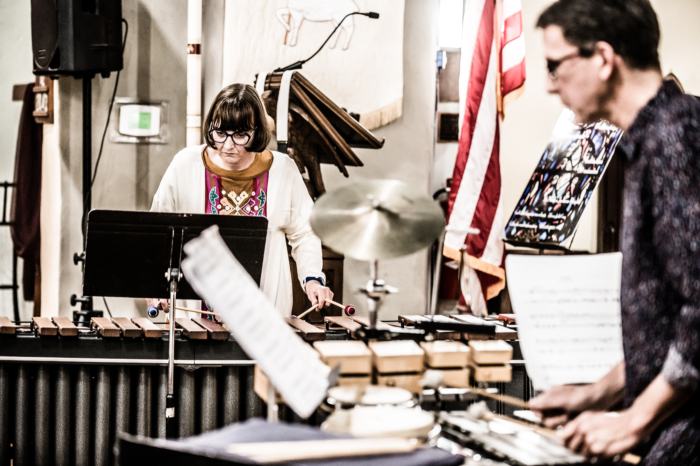 Later in the afternoon, the Queens musical group Percussia brought their marimbas, assorted percussion instruments, harp, violin and flute to the altar (at the beginning of the video below). In their eclectic style of classical and experimental music, Percussia played an instrumental piece before being joined by a soprano vocalist for “Starfish at Pescadero,” a musical setting of a bittersweet poem by Idris Anderson composed by Dennis Tobenski, who watched from the audience. They finished with the world premiere of “From the Atlas of Imaginary Places,” a sequence inspired by different mythical lands from literature composed by Victoria Bond, who was also in attendance.

In the evening, with the windows darkening and a new crowd arriving, Pádraig Ó Tuama and Tomás Morín sat down for a discussion of Morín’s poetry and prose (1:20:00 in the video above). Ó Tuama is widely known as the host of “Poetry Unbound,” the podcast from the creators of “On Being,” and as a theologian focusing on peace and conflict mediation.

Morín recently published two books – “Let Me Count the Ways,” a memoir, and the poetry collection “Machete” – both of which deal with complex family dynamics intertwined with the experience of being a Mexican-American man. Raised by surrogate fathers as his own father struggled with drug addiction, Morín explores loneliness in his poems and his translations, including the forlorn opening of Dante’s “Inferno.” 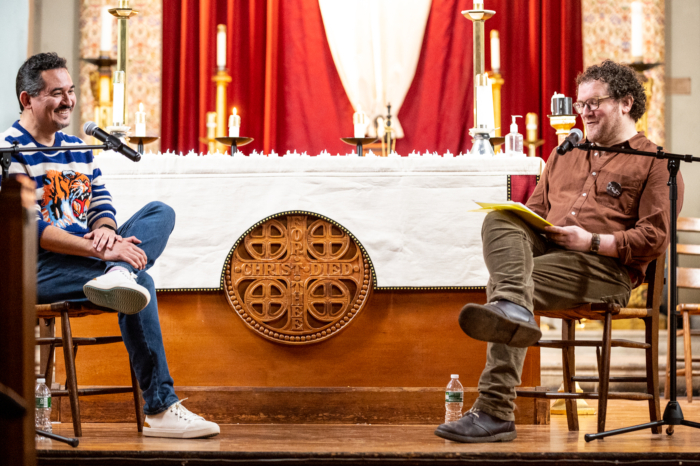 The day closed with a segment (at 2:41:00 in the video above) hosted by the Rev. Travis Helms, director and founder of Logos Poetry Collective, a project that aims to unite the medium of poetry with liturgy and ritual. Helms started Logos in 2019, wanting to celebrate spirituality in poetry and break out of the sometimes stuffy and academic nature of poetry readings. Logos events – which took place at a brewery in Austin, Texas, before the pandemic but have mostly moved online for the time being – include two feature poets but also elements of audience participation, such as call-and-response poetry and discussions about the poems.

“It can feel as if either you’re simply passively absorbing poetry as an audience member or you’re simply discharging it on folks from a podium,” Helms explained. “And we started wondering what it might look like to lovingly, artfully, non-dogmatically fold aspects of sacred ritual into the format of a traditional poetry reading. And out of that conversation came Logos.”

After the ringing of a meditation bell and the passing of the peace, Helms and the audience read a poem by Martín Espada responsively by verse, like a psalm. As featured poets Carmen Giménez Smith and Ariel Francisco read their work, periods of audience discussion were interspersed between the poems, followed by a question-and-answer session with the poets and another responsive poem.

Reece told ENS he was pleased with how the event turned out, especially considering the logistics involved in pulling it all together, and he’s considering whether to do more large events like this in the future. In the meantime, leaders from other churches who have heard about the Red Door Series are already starting to pick up its usual, shorter format. Churches in Milford, Connecticut; Jackson, Wyoming; and Victoria, Canada, have consulted Reece about starting their own series modeled after Red Door.

“It was kind of like a liturgical laboratory experiment,” Reece said. “Three places in very different locations – they’re all doing it. So I hope that that’s a gift for the church.”