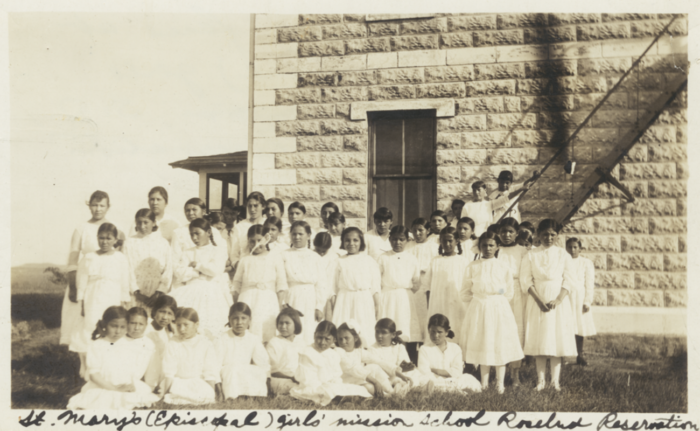 Students at St. Mary’s, an Episcopal school for Indigenous girls on the Rosebud Reservation in South Dakota, are seen in an undated photo from the G.E.E. Lindquist Papers, held by the Burke Library Archives at Union Theological Seminary.

[Episcopal News Service] Pearl Chanar, an Alaska Native of Athabascan heritage, grew up in a small village surrounded by her immediate and large extended family. That changed when she became a teenager and was sent hundreds of miles away to a boarding school. 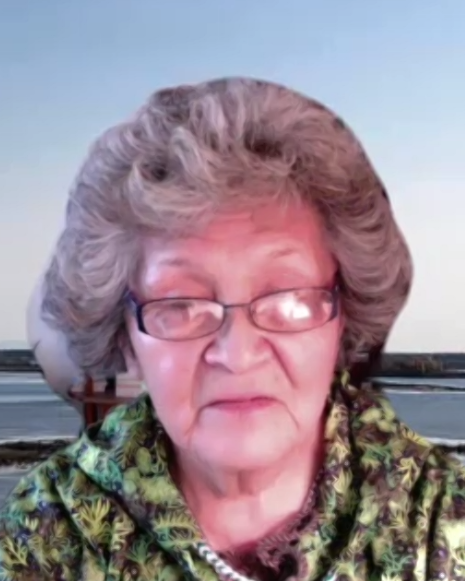 Pearl Chanar of Alaska shares her story of attending an Indigenous boarding school during the church’s Oct. 11 webinar, “Native Voices: A Response to The Episcopal Church’s History with Indian Boarding Schools.”

“I remember it took four different airplanes for me to get from my home to this small island far, far away,” Chanar said Oct. 11 during an online panel discussion hosted by The Episcopal Church’s Office of Indigenous Ministries. “What I remember most was that loneliness, missing my parents.”

At the school, Chanar said she could communicate with her family through letters. She and other Alaska Native students were prohibited from using their Indigenous languages or enjoying cultural activities, like singing and dancing, she said. They were among the generations of American Indians who endured family separation and forced assimilation into white society in a system that has been described as a kind of cultural genocide.

The panel discussion, “Native Voices: A Response to The Episcopal Church’s History with Indian Boarding Schools,” was held on Indigenous Peoples Day, a holiday that is increasingly being celebrated in place of Columbus Day. It followed a July statement by Presiding Bishop Michael Curry and the Rev. Gay Clark Jennings, the House of Deputies president, acknowledging the church’s past complicity in the boarding school system.

“Kill the Indian, save the man” was the rationale for that system offered in 1892 by Richard Pratt, founder of the Carlisle Indian Industrial School in Pennsylvania. Pratt’s words were cited by some of the webinar’s panelists as they lamented the legacy of the federal system of American Indian boarding schools, including some founded and operated by Episcopal churches.

The National Native American Boarding School Healing Coalition, a nonprofit based in Minneapolis, Minnesota, has identified at least 373 schools that were part of that system, many of them run by Christian denominations. At least nine were thought to have Episcopal Church connections, though the dearth of churchwide records has made it difficult to fully account for the church’s role in the schools.

“This is a very large and complicated history that we have to unpack,” said panelist Christine McCleave, chief executive officer of the Boarding School Healing Coalition. She is an Ojibwe member from the Turtle Mountain Reservation in North Dakota, and her grandfather and great-grandfather attended Indigenous boarding schools. She explained that the trauma caused by the forced disengagement from family and culture has been passed from generation to generation.

“We’re at a point where it’s now critical to start having these conversations,” McCleave said. The Native Americans who have reached out to her organization, she said, are sharing “a lot of deep spiritual pain and, in fact, a lot of anger that is being expressed toward the church.” 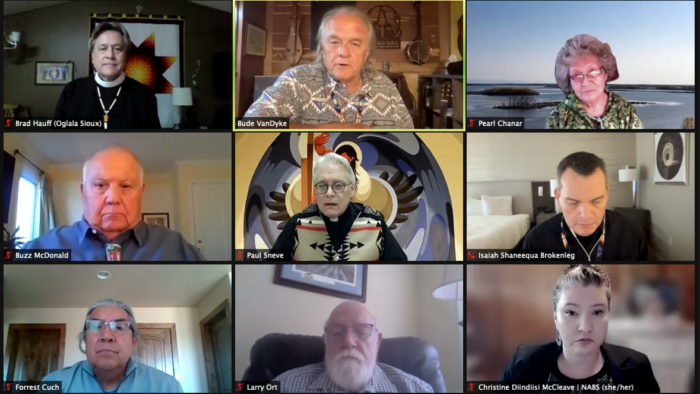 Episcopal and secular leaders join a panel discussion on Oct. 11 about the legacy of Indigenous boarding schools.

The legacy of boarding schools made international headlines this year with the discovery of a mass grave containing the remains of 215 children at a former Indigenous boarding school in Canada. Following the discovery, the U.S. Department of Interior announced in June it was launching a comprehensive review of American boarding school policies dating to 1819, and some lawmakers are pushing for creation of a truth and healing commission to investigate further. The Episcopal Church supports those efforts.

“We condemn these practices and we mourn the intergenerational trauma that cascades from them. We have heard with sorrow stories of how this history has harmed the families of many Indigenous Episcopalians,” Curry and Jennings said in their July statement. “While complete records are unavailable, we know that The Episcopal Church was associated with Indigenous schools during the 19th and 20th centuries. We must come to a full understanding of the legacies of these schools.”

The Rev. Bradley Hauff, the church’s missioner for Indigenous ministries, read from the presiding officers’ statement at the open of the Oct. 11 webinar. Hauff, who is Lakota, also shared his own family’s story, how both of his parents attended Indigenous boarding schools in South Dakota.

His mother, Margaret, attended an Episcopal boarding school as a child. His father, Sylvan, was taken at age 5 to a boarding school run by the federal government. For the first year, his father would go to the gate and wait for someone to come take him home, but no one came.

“And he got angry, and he realized he had to get tough in order to survive the boarding school experience. That’s an awful thing to happen to someone that young,” Hauff said. “I’m amazed that he made it through and did as well as he did, but that’s the resiliency that Indigenous people have and that’s why we are still here to this day.” 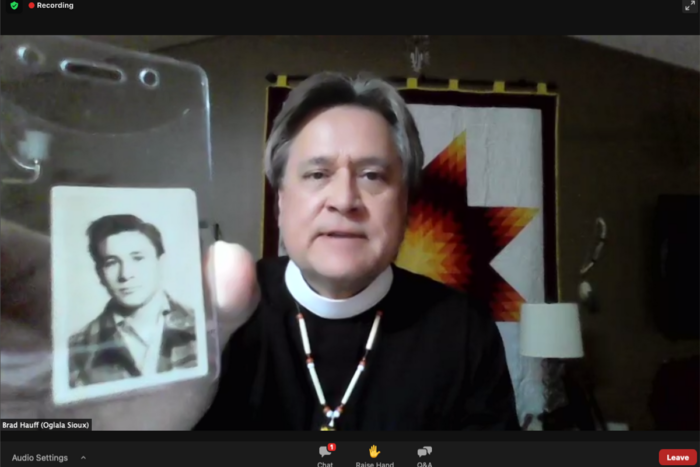 The Rev. Bradley Hauff, missioner for Indigenous ministries, shows a picture of his father, Sylvan, at age 17 during an Oct. 11 about Indigenous boarding schools. Hauff’s father spent most of his childhood at such a school on the Pine Ridge Reservation in South Dakota.

Boarding school students endured a wide spectrum of experiences, as Hauff and other participants detailed. Some students were forced to attend, while other families voluntarily sent their children to receive what often was the only education available. In some cases, they endured a nightmare of mistreatment, abuse and even death far from home. Other survivors of the boarding schools recall no physical abuse but still trauma from the family separation and deprivation of their culture and identity.

Some of the webinar’s panelists said they welcomed the statement this year by Curry and Jennings. It was “a good beginning,” said Forrest Cuch, a member of the Ute tribe and an Episcopalian from Utah. “But we have a long way to go, a long, long way.”

Native Americans have suffered under oppressive European colonialism for hundreds of years, since the time of Christopher Columbus, Cuch said. The boarding school system only exacerbated that trauma.

“What troubles me the most is the horrific disfunction that I’ve observed in our families and other families as a result,” he said. “It has to be healed.”

Hauff addressed the legacy of the boarding schools during committee discussions at the June meeting of Executive Council, and a more thorough discussion is expected at the governing body’s October meeting. Curry and Jennings also pledged to “make right relationships with our Indigenous siblings an important focus of the work of Executive Council and the 80th General Convention” in July 2022.

Some Indigenous boarding schools remain open today, though they no longer operate under former federal policies of forced assimilation. The Ven. Paul Sneve, who is Rosebud Sioux and serves as archdeacon in the Diocese of South Dakota, said both of his parents worked at the Flandreau Indian School, as did Sneve himself for about 10 years. Stripped of the 19th-century policies of “kill the Indian,” the school now focuses on helping Indigenous students succeed academically while honoring their Native culture and identity.

Sneve also has heard the painful stories of earlier generations of American Indians who attended the boarding schools, including his mother, grandmother and great-grandparents. Their pain is perpetually passed on to their descendants unless they are able to heal that trauma, he said.

“We owe it to them to expose our hearts and begin to heal,” Sneve said. “This discussion is going to take a very long time, and we have to be patient and listen very carefully and prayerfully.”

Chanar, who now lives northwest of Fairbanks in Minto, Alaska, said the news this year of a mass grave at a former Canadian boarding school made her “angry all over again,” but she is hopeful that the church will seize this moment to listen to the stories of survivors like her.

“This is the history of the church, and we have to go through the healing,” she said.