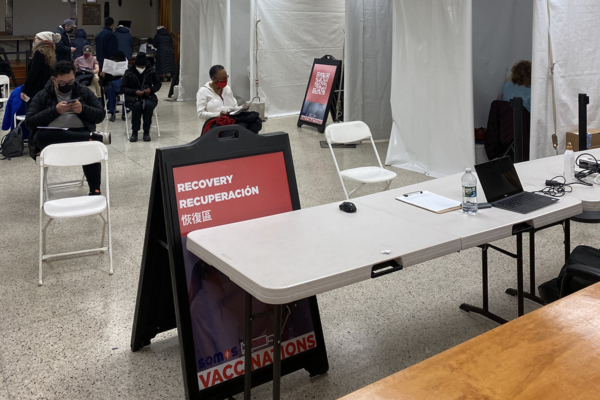 St. Luke’s Episcopal Church in the Bronx borough of New York City opened its doors to COVID-19 vaccination clinics in January and February. At least 15 members of the congregation have died in the past year after contracting the coronavirus. Photo: Pierre-Andre Duvert

[Episcopal News Service] The surge in COVID-19 cases at the start of the pandemic a year ago hit the New York City area hard, with emergency rooms filled to capacity and the death toll rising. Among the city’s dead were at least 15 members of St. Luke’s Episcopal Church, a large congregation of African American and Black immigrant families in the Bronx.

“We know the impact, the negative impact of the pandemic,” the Rev. Pierre-Andre Duvert, the church’s rector, told ENS this week as the world marked one year since the pandemic was first declared.

Many of those who got sick from the coronavirus were longtime members and lay leaders at St. Luke’s. Now, with vaccination efforts ramping up across the United States, St. Luke’s and other Episcopal churches are joining other faith-based organizations in offering their facilities as vaccination sites.

President Joe Biden, in a prime-time address on March 11, announced that vaccinations should be made available to all Americans who want them starting May 1, with the goal of some return to normal life by July 4. Face masks, social distancing and hand sanitizer are still recommended to help limit the virus’ spread.

Parish leaders and other members of St. Luke’s got their vaccinations along with local residents at the vaccination clinics hosted at the church on Jan. 25 and Feb. 16. Duvert, who was among them, said he thinks offering the church as a host site helped send a message that community members need not fear the vaccinations.

“We are not asking them to submit themselves to something we are not willing to do,” he said. “If we knew it was something unsafe, we wouldn’t be taking it.”

Given COVID-19’s heavy toll on St. Luke’s, the congregation is happy to be part of bringing an end to the pandemic, though that sense of mission is driven by more than the tragedies suffered by church members, Duvert said. “St. Luke’s is a church that serves the community, and even if our congregation was not affected, we would still extend ourselves because that’s what we do.”

Other Episcopal congregations feel a similar sense of mission calling them to assist vaccination efforts.

On March 10, the African Episcopal Church of St. Thomas in Philadelphia, Pennsylvania, teamed up with Main Line Health to host a daylong vaccination clinic at the church, “to encourage communities of color to receive the vaccine following instances in history of racism, disparity and inequity within the health care system,” according to a news release.

The Diocese of Pennsylvania also is hosting a clinic for diocesan clergy and other essential workers on March 13 at St. Luke’s Episcopal Church in Philadelphia.

Last month, about 500 people received their vaccinations in a makeshift clinic set up in the parking lot of Iglesia Episcopal Jesus de Nazaret in Azalea Park, just east of Orlando, Florida. “Our church has too many COVID funerals,” the Rev. Jose Rodriguez told WFTV-TV. “We’ve had too many parishioners get sick.” 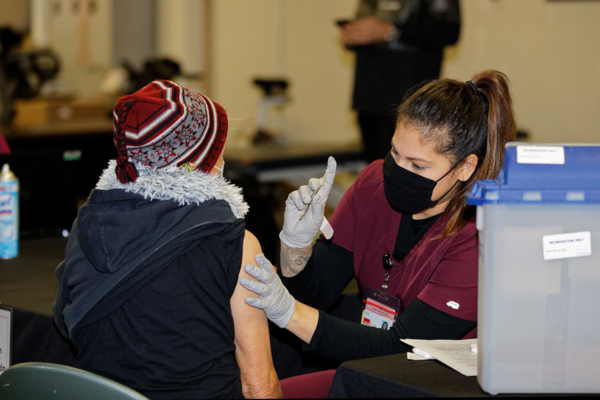 In Galveston, Texas, the Diocese of Texas’ St. Vincent’s House hosted a Feb. 11 clinic at which nearly 100 people got their COVID-19 vaccinations. Also last month, Old North Church in Boston, Massachusetts, opened its doors to neighbors looking to get their shots while sitting in the church’s historic pews.

Such clinics, coupled with similar outreach by ecumenical partners, aim to offer faith-based support for the American vaccination effort, which this month is averaging more than 2 million doses a day, according to data tracked by the New York Times. About 64 million people have received at least one dose of a COVID-19 vaccination, or nearly 20% of the U.S. population.

Churches also have assisted community members, especially older Americans, in navigating the country’s patchwork of vaccine appointment systems. And they have paid special attention to the needs of communities of color, which have faced greater challenges in accessing the vaccinations than white Americans.

“We must not leave anyone behind,” the Rev. Kenneth Keke told Religion News Service. Keke is pastor of St. Brigid Catholic Church in Los Angeles, California, a Black and Latino parish that is participating in a two-day pilot project this week to vaccinate 600 people living within two miles of the church.

“We have to change the story that Blacks and Latinos can’t access the vaccine,” Keke said.

St. Luke’s in New York is doing its part to change that story. It previously served as a COVID-19 testing site, so when vaccinations became available, public health officials asked the congregation to participate in that campaign as well.

“We want to get as many inoculated as possible,” Duvert said.

He recalled that earlier in the pandemic his assistant spent time in the hospital for treatment of COVID-19, as did one of the church’s wardens and other parish leaders. The congregation was dealt an even heavier blow by the death of Donald Bookal, a longtime church member who was well known in the community.

Bookal fell ill in March 2020, Duvert said, just as churches and other public gathering spaces were beginning to shut down. Duvert calls Bookal’s funeral the most difficult he’s had to officiate as a priest, made tougher by the constraints on large gatherings.

“We were only allowed to go with a few selected members of the family at the gravesite,” Duvert said. If not for the pandemic, “it would have been a packed church and a celebration of his life, but we never got a chance to do that.”