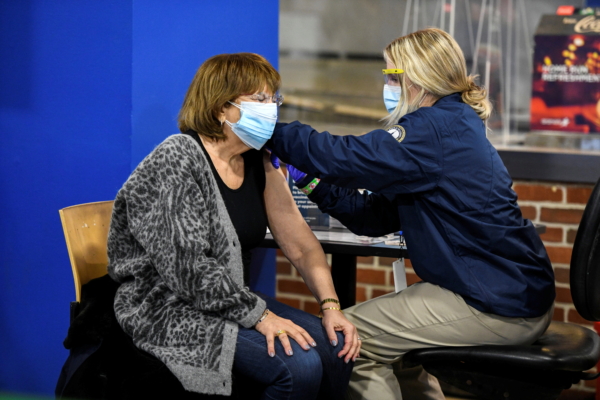 [Episcopal News Service] With COVID-19 vaccine rollouts varying widely from state to state, some states have been criticized for their confusing and dysfunctional vaccine appointment systems. One of those states is Massachusetts, which – despite being a world-renowned leader in health care and the home of vaccine producer Moderna – has largely delegated the administration of vaccines to a fragmented patchwork of hospitals and private companies.

The problems intensified over the past week as the state began opening up vaccine appointments to residents age 75 and older – a demographic that is less familiar with computers and more likely to encounter difficulty using online appointment systems. They often have to navigate labyrinthine websites, continually refresh pages and upload photos of their insurance cards. Seniors have expressed confusion, frustration and hopelessness.

The Episcopal Parish of St. John the Evangelist in Hingham, a suburb of Boston, saw the technical difficulties as an opportunity to help. Volunteers from the parish’s COVID Response Team are helping older parishioners navigate the red tape and get signed up for vaccine appointments.

“This is what it’s all about,” the Rev. Tim Schenck, rector, told Episcopal News Service. “I always think about Paul’s line in Galatians about how we’re called to bear one another’s burdens, and this seems like an absolutely critical time for us to be bearing one another’s burdens, and this is just a very tangible way that we can do that right now.”

Over the past year, the parish’s COVID Response Team has been meeting a variety of parishioners’ needs, from running errands to delivering masks to assisting those who had trouble accessing online worship.

“The COVID Response Team model is taking this organic interest and goodwill in the church and then matching it to the needs,” said volunteer Jody Jones Turner. Seventy people signed up to help when it first launched, and they have since recorded about 150 “acts of kindness,” she said.

“I always think about the COVID Response Team as the Match.com of ministry,” Schenck said, “really matching parishioners’ needs with parishioners’ deep desire to help.”

The vaccine appointment initiative originated when Schenck got a call from a parishioner “who had just navigated this whole process of vaccine scheduling for her parents and found it to be neither easy nor intuitive,” he told ENS.

“And she was like, ‘This must be something that other people are having a hard time with, especially [seniors]. … This is such a serpentine process. There’s got to be a way that we could help others.’”

“I think it’s hard for anybody to do this,” Schenck said, “and so you add not being particularly tech savvy on top of that, and it is a little bit of whack-a-mole right trying to get an appointment here and there.”

Schenck brought the idea to the COVID Response Team last week, and they got started the same day. “It just seemed like a really good fit,” said Turner, who works as the program manager for the transplant unit at Massachusetts General Hospital in Boston. She brought her knowledge of the health care system and recruited other volunteers to help with this particular project.

“Now we have, like, this little SWAT team organized,” Turner told ENS, “and everyone has different levels of information.” Turner, for example, knows more about the programs at hospitals in Boston, while another parishioner has familiarized herself with the distribution protocol at CVS pharmacies, and another parishioner with the mass vaccination site at Gillette Stadium, home of the New England Patriots.

They posted about the program on Facebook, and within an hour, they had their first request. So far, four people have requested assistance, and three of them have already gotten their first shots. Mostly, the team sets parishioners up with phone-based appointment systems so they don’t have to use computers, resulting in “a more pleasant experience,” Turner said.

Schenck and Turner say they hope to build a collective knowledge of the distribution system so that they can continue to help as more people become eligible for the vaccine. In the meantime, they hope to inspire other churches to do similar work for their elderly parishioners and neighbors. Both emphasized that the networks and connections formed by the COVID Response Team allowed them to address this need quickly. Once the structure was in place, the volunteers’ enthusiasm was channeled into action.

“Setting up the pieces to allow the network to mobilize – that’s really powerful,” Turner said.

“The intergenerational aspect of this is really beautiful to watch,” said Schenck, adding that the effort is an inspiring reminder that laypeople can be called to pastoral care, not just clergy.

“I just love that sense of crowdsourced pastoral care. … The fact that this is grassroots-led is really exciting to me, and that’s what a church should be doing. And being.”