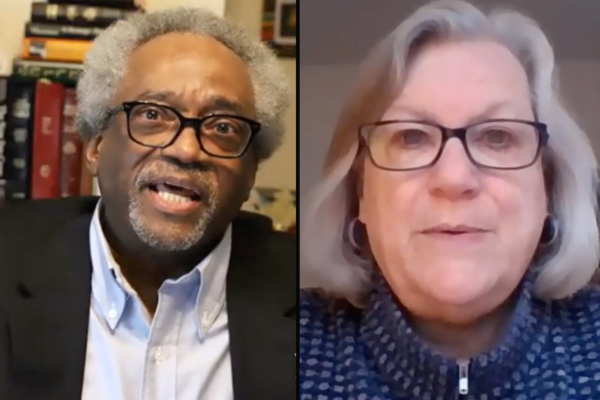 [Episcopal News Service] Reactions to the Jan. 6 riot at the U.S. Capitol and this week’s inauguration of President Joe Biden dominated the opening remarks of The Episcopal Church’s presiding officers on Jan. 22, as Executive Council gathered online for the start of a four-day meeting.

Presiding Bishop Michael Curry and the Rev. Gay Clark Jennings, president of the House of Deputies, both mixed expressions of hope for the future with acknowledgments that the church has much work to do in affirming Jesus’ way of love and rejecting the divisive threat of Christian nationalism. Curry quoted Biden’s inaugural address – “‘we must end this uncivil war’” – and then connected that political imperative to the Christian call to love one’s enemy.

“I believe that we who follow Jesus, who have made a commitment in baptism to follow his way of love, I believe that we have been given our marching orders, our mission, our mission from God, our mission to heal God’s lost creation, to bind up the broken, to repair the breach, to do the hard, disciplined work of love,” Curry said. “This way of love, unselfish and sacrificial, is the way to save a democracy. It is the way to save a world. It is our hope.”

Jennings, speaking for about 10 minutes, recounted how some of the rioters who stormed the Capitol “declared allegiance to Jesus and the former president, sometimes conflating them” in the signs, banners and flags they carried. “The stories, signs and symbols of our faith are being put to violent use by people who want to establish a nation in which power and privilege is held exclusively by white Christians.”

Five people died in the Jan. 6 Capitol siege, and former President Donald Trump now faces a trial in the Senate after the House impeached him Jan. 13 on a charge he incited the insurrection. Trump, after refusing for two months to accept his Nov. 3 loss, had urged his supporters to “show strength” and “take back our country” by opposing what he falsely claimed was a stolen election.

“The use of Christianity to advance white supremacist extremism did not begin in 2016, and it did not end at noon on Wednesday,” Jennings said, referring to the hour when the presidency transferred from Trump to Biden. “This violent and exclusionary movement is on the rise in the United States. … We have a special responsibility to stand against it.”

Curry returned several times to Biden’s inaugural call for unity. If Jan. 6 was a “vision of hell,” he said, the inauguration was filled with reasons for hope. “It had nothing to do with whether a Republican or Democrat got elected, I saw some hope,” Curry said.

Elected leaders from both parties came together Jan. 20 to witness the peaceful transition of power, he said. “I saw some hope,” Curry said, when the nation welcomed Vice President Kamala Harris as the first woman, first Black American and first Asian American to hold that office. Curry also singled out the words of 22-year-old poet Amanda Gorman, who has earned widespread praise after reading her work “The Hill We Climb.”

Executive Council, The Episcopal Church’s governing body between the triennial meetings of General Convention, typically gathers three times a year, and this meeting marks a full year’s cycle of online meetings since the onset of the coronavirus pandemic last March. Council members are gathering Jan. 22-25 on Zoom, for plenary sessions and committee meetings, with the plenary sessions livestreamed on YouTube.

The church’s ongoing racial reconciliation efforts continue to figure prominently on Executive Council’s agenda. After the opening remarks and a treasurer’s report from Chief Financial Officer Kurt Barnes, members broke into small groups for discussions on dismantling racism. The attack on the Capitol and law enforcement’s response to it were expected to be part of those discussions.

“Many of us observed the vastly different reaction to white, mostly male insurrectionists and lamented if this were the Black Lives Matter protests, the response would have been swift and deadly,” said Jane Cisluycis, a council member from the Diocese of Northern Michigan.

Cisluycis chairs the Governance and Operations Committee, which has scheduled a “discussion on a post-COVID-19 church” this weekend, among other topics on its agenda. The pandemic continues to pose uncertainty in church budgeting, but Barnes assured Executive Council that the balance sheets continue to contain mostly “good news.”

Income and expenses for 2020 were mostly in line with the revised budget for the year, which included pandemic-related cuts. Investment income, meanwhile, was a bright spot, with a return of nearly 20% for the year. The church’s annual appeal topped $500,000, far exceeding its goal, part of a strong year of fundraising by the Development Office. And despite fears about how the pandemic would affect the bottom line for dioceses and congregations, nearly all paid what they had pledged in assessments to The Episcopal Church.

“As I’ve sort of preached all year, we should remain calm during short-term jolts,” Barnes said, while acknowledging, “we’re still looking at economic forecasts that are uncertain.”

Executive Council has 40 voting members, including the presiding bishop and House of Deputies president, as well as additional nonvoting members, such as the Episcopal Church’s finance director. Twenty of the voting members – four bishops, four priests or deacons, and 12 laypeople – are elected by General Convention to six-year terms, with half of those members elected every three years. The other 18 are elected to six-year terms by The Episcopal Church’s nine provinces, with each province sending one ordained member and one lay member.

On Jan. 23, Executive Council’s plenary session will include a discussion of a report by a task force created by General Convention to study the relationship between The Episcopal Church and the Church Pension Fund.

Because of that change, Executive Council will focus this year on drafting a one-year budget for 2022 that will be approved in October 2021. Then in January 2022, it will present a two-year budget proposal, for 2023-24, which will be considered by General Convention when it meets in Baltimore.

Jennings spoke of “Zoom fatigue” in her opening remarks and thanked everyone for “your continuing perseverance” in navigating this new, remote way of carrying out church business. She also celebrated one of the numerous executive actions Biden signed during his first days as president. By executive order, Biden committed the government to fully implementing a June 2020 Supreme Court decision ending workplace discrimination against LGBTQ people.

Jennings and Curry were lead signers of a legal brief calling for that court ruling, along with more than 700 other faith leaders. The Trump administration never acted on the Supreme Court’s decision, Jennings said, but with Biden’s action, “LGBTQ people have been assured of the legal protections the court ordered.”

“This is an enormous victory,” Jennings said. “The Episcopal Church’s witness made a difference in moving the United States closer to justice for all of God’s children.”

Curry spent part of his opening remarks highlighting “From Many, One,” a campaign that the church launched this month to encourage Episcopalians to engage in thoughtful conversations with people who disagree with them. “We need to reach out to each other across our differences, across the divides. We need to reach out and bless each other as people made in the image of God, as children of God.”

Jennings also spoke of the need for the country to heal after the Capitol riot, but she also offered a word of caution.

“We want to believe that if we just talk across our differences or build relationships with people on the other side of the political divide, we can put this terrible nightmare behind us,” she said. “We hope and pray that it’s over now because the former president is out of office and off of Twitter.” But Jennings underscored the continued need to pursue “deradicalization” in the United States – an issue that The Episcopal Church’s Office of Government Relations had outlined in a paper it produced for Executive Council in October.

“The Episcopal Church has the opportunity to respond to this threat by offering an ‘off-ramp’ for those who have joined extremism groups, expanding the possibility of reconciliation and forgiveness,” the Office of Government Relations said in an excerpt read by Jennings. “The Church can prevent those who are on the brink of joining radical extremist groups from doing so, inoculating young people from succumbing to these ideologies.”

The church’s support of “deradicalization” efforts will be discussed Jan. 23 by Executive Council’s Committee on Mission Within The Episcopal Church. Executive Council also is reviewing a report summarizing a racial justice audit of church leadership conducted by the Mission Institute.