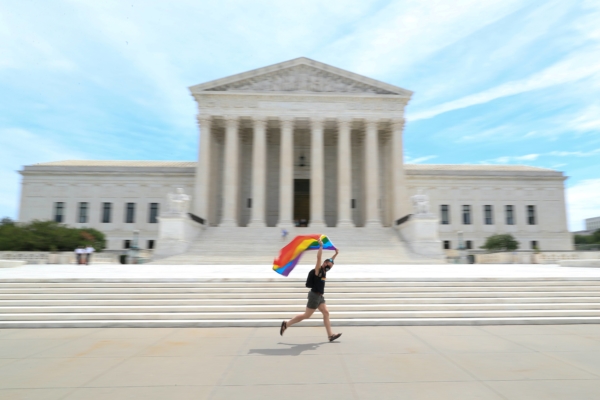 “The Supreme Court has spoken again for the equality of all God’s children,” Presiding Bishop Michael Curry said on June 16, praising the court’s 6-3 decision in remarks to church employees at the start of their two-day annual staff meeting.

In July 2019, Curry and the Rev. Gay Clark Jennings, president of the House of Deputies, signed a friend of the court brief supporting the plaintiffs in the case.

Speaking to employees via Zoom, Curry put yesterday’s ruling in the context of the court’s June 2015 ruling that upheld same-sex marriage nationwide. That earlier decision was handed down just as The Episcopal Church’s General Convention was getting underway in Salt Lake City, Utah, spurring bishops and deputies to approve trial-use marriage rites for same-sex couples.

Jennings posted the news on Facebook, quoting from a July 2019 statement she made when she and Curry filed their legal brief on behalf of more than 700 interfaith leaders.

“As Christians, we bear a particular responsibility to speak out, because attempts to deny LGBTQ people their dignity and humanity as children of God are too often made in the name of God,” Jennings said. “This way of fear is not the way of Jesus Christ, who teaches us to cast out fear.”

The Supreme Court’s majority opinion was written by Justice Neil Gorsuch, the court’s sole Episcopalian. “An employer who fires an individual merely for being gay or transgender defies the law,” he declared.

The court’s ruling this week expands job protections under the 1964 Civil Rights Act to include sexual orientation and gender identity. Gorsuch was joined in the majority by Chief Justice John Roberts and the four members of the court’s liberal bloc.

The decision settled a series of lawsuits brought against employers by former employees who said they had been fired after revealing they were gay or transgender. The plaintiff in one of the lawsuits, Gerald Bostock, was working as coordinator of a program monitoring children placed in foster care in Clayton County, Georgia, near Atlanta, when he was fired in 2013. He had joined a gay softball league six months earlier.

“I’m elated, and words cannot fully express the gratitude I have for the justices,” said Bostock, 56, according to the Atlanta Journal-Constitution’s report on his post-ruling news conference.

“Our joy flows primarily from the fact that this ruling affirms what God has ordained and what we already know, that every human being is made in the image of God and has inherent, dignity, value and worth,” Wright said June 16 in a written statement. “And that prejudice in every form is incompatible with faith in God and with a nation whose goal is greatness.”

TransEpiscopal, a group that connects transgender and nonbinary Episcopalians and advocates for their full inclusion in the church, celebrated the decision and thanked Curry and Jennings for their part in it.

“We feel the support of our wider church, particularly from Presiding Bishop Michael Curry and President of the House of Deputies Gay Clark Jennings, who were lead signers on an amicus brief,” the group wrote. “Thank you.”

However, the group tempered its celebration of the ruling by noting that just a few days before, the Trump administration eliminated an Obama-era regulation that banned discrimination against transgender people in health care, part of a broader effort by the administration to remove protections for transgender people throughout the federal government. Health care in particular, the group wrote, continues to be a major vector of inequality in America, made visible in recent months by the disproportionate effect of COVID-19 on African Americans.

The group also lamented what it called a “horrific systemic pattern” of killings of transgender people of color in America.

Some Episcopal bishops joined Wright in celebrating the Supreme Court ruling. Washington Bishop Mariann Edgar Budde expressed gratitude for the years of advocacy work that led up to the decision. “What once seemed impossible happened today,” she said.

What once seemed impossible happened today. What some Christians wanted to happen today didn’t. What many Christians prayed and worked for, alongside many others, happened. I’m giving thanks tonight and celebrating with my GLBTQ friends and family.

“The fundamental equality of humanity is God-given. It is enshrined in the Bible in the first chapter of Genesis when it says human beings are created in the image and likeness of God,” Curry said. “There is no hierarchy of that image, we equally bear it. Later in Genesis, in the ninth chapter, verse six, the text picks up the theme of the image of God in human beings as conferring value so great that human life should not be taken.

“This decision is another one of those moments when our nation is living up to the ideals of America.”

In recent years, some of the most intense debate within The Episcopal Church over greater inclusion of LGBTQ Christians has focused on same-sex marriage, though the church’s opposition to anti-gay discrimination dates back even further. In 1976, General Convention passed a resolution affirming that “homosexual persons are entitled to equal protection of the laws with all other citizens.”

Expanding that position to include gender identity, a 2009 resolution called for “enactment of laws at the local, state and federal level that prohibit discrimination.” It also sought prosecution of violence against people for their gender identity as hate crimes.

And in 2017, the church’s stance against discrimination nearly prompted Episcopal leaders to move the 79th General Convention rather than hold it as planned in Austin, Texas. At that time, the Texas Legislature was considering a “bathroom bill” that would have required anyone using a public restroom in Texas to use the facility labeled with the gender that matched the sex stated on the person’s birth certificate or driver’s license.

Curry and Jennings sent a letter to the speaker of the Texas House of Representatives in February 2017 saying if the bill became law, The Episcopal Church would face the “difficult choice” of moving General Convention to a different state rather than support legalized discrimination.

The bill was defeated in August 2017, and Episcopal leaders kept Austin as host city for the church’s triennial gathering.

“We give thanks for all of the Texan Episcopalians, elected officials, business leaders, and advocates who raised their voices publicly against this proposed law and the physical, spiritual and emotional damage it threatened to do to transgender people,” Curry and Jennings said at the time.

When General Convention met in Austin in July 2018, it passed a resolution reaffirming its support for transgender rights and pledged to support “legislative, educational, pastoral, liturgical, and broader communal efforts” to oppose violence and discrimination against transgender people.