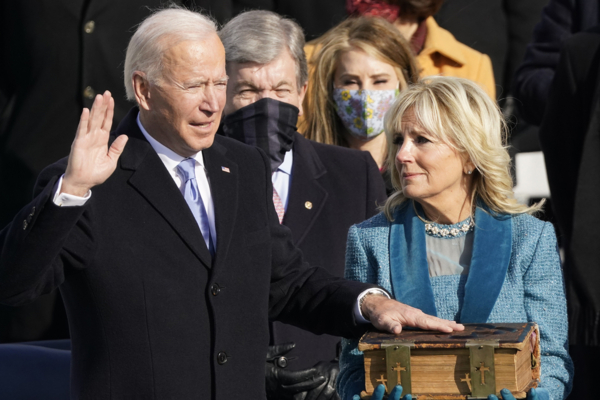 Joe Biden is sworn in as the 46th president of the United States by Chief Justice John Roberts as Jill Biden holds the Bible on Jan. 20. Photo: Associated Press

[Episcopal News Service] Episcopalians across the church on Jan. 20 joined in prayers for the new administration as Joseph R. Biden Jr. was sworn in at noon as the 46th president of the United States.

In his inaugural address, Biden drew from Scripture and his own faith in calling for a unified national response to the “cascading crises” facing America, from the COVID-19 pandemic to the Jan. 6 insurrection at the U.S. Capitol to climate change to rampant disinformation. Projecting perseverance and hope, Biden urged Americans to be civil in their disagreements and join forces to defeat the coronavirus, extremism, hatred and lies.

“We must end this un-civil war that pits red against blue, rural versus urban, conservative versus liberal. We can do this if we open our souls instead of hardening our hearts.”

Most of the celebrations and prayer services were held online because of the pandemic. On the eve of the inauguration, Presiding Bishop Michael Curry was among an ecumenical group of 30 faith leaders who offered prayers in an online #PeaceWithJustice prayer vigil organized by Sojourners.

“Teach our leaders to love,” Curry said in the vigil. “Grant them and grant us your loving, liberating and life-giving spirit. Move our hearts and then show us the way to break down barriers that divide, to make suspicions disappear and hatreds to cease. There are divisions being healed, wrongs being righted. We may learn to live in justice, love and peace.”

The Diocese of Texas held an evening prayer service on Jan. 19, while the three dioceses in Wisconsin promoted a 24-hour prayer vigil leading up to the ceremony. New York’s Trinity Church Wall Street invited parishioners Jan. 20 to join a pre-inaugural vigil on Zoom. The Diocese of Hawaii was scheduled to follow the inauguration with “Noonday Prayers for Our Country.”

Biden is expected to join Washington National Cathedral at 10 a.m. Jan. 21 for its traditional inaugural prayer service, this time being held online because of the pandemic. It will feature a sermon by the Bishop William Barber II, a Disciples of Christ pastor and co-chair of the Poor People’s Campaign. Musical performances will include Josh Groban and Patti LaBelle, and Curry will deliver a final blessing to conclude the service.

That service comes two days after Washington National Cathedral tolled its bell 400 times on Jan. 19, once for every 1,000 lives lost in the coronavirus pandemic. The Presidential Inaugural Committee also held a lighting ceremony that evening at the Lincoln Memorial Reflecting Pool in memory of the nearly 400,000 Americans who have died of COVID-19. 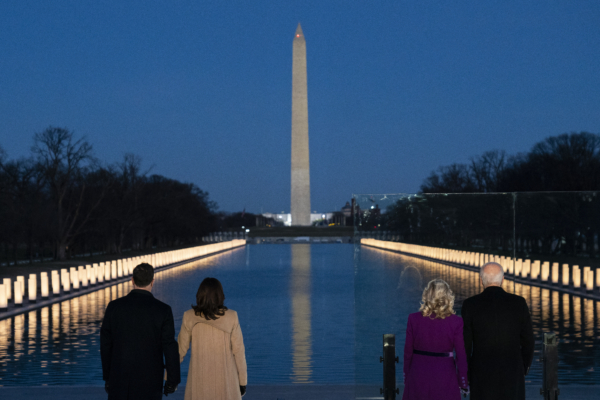 President-elect Joe Biden and his wife Jill Biden are joined by Vice President-elect Kamala Harris and her husband Doug Emhoff during a COVID-19 memorial event at the Lincoln Memorial Reflecting Pool on Jan. 19 in Washington. Photo: Associated Press

Biden’s inaugural committee and leaders in Washington had asked Americans to stay home Wednesday and to limit gatherings. Former Presidents Barack Obama, George W. Bush and Bill Clinton attended the inauguration of Biden and Vice President Kamala Harris. Former President Donald Trump left Washington in the morning rather than join them for the ceremony.

During his inaugural address, Biden quoted Saint Augustine, “who wrote that a people was a multitude defined by the common objects of their love,” he said. “What are the common objects we as Americans love, that define us as Americans? I think we know. Opportunity, security, liberty, dignity, respect, honor and, yes, the truth.”

Acknowledging the pain and grief Americans have experienced in “this dark winter,” he also quoted Psalm 30: “Weeping may endure for a night, [but] joy cometh in the morning.”

Biden swore his oath on a Bible that has been in his family since 1893, which he has used since he was first sworn into the Senate in 1973. Harris used two Bibles: one that belonged to a close family friend and another that belonged to Thurgood Marshall, the first Black Supreme Court justice and an Episcopalian who was added to the church’s calendar of saints in 2018.

Biden delivered his address and called for unity on the steps of the U.S. Capitol, where two weeks earlier a pro-Trump mob had stormed the building as Congress met to certify the 2020 election. The attack, which forced the temporary evacuation of the House and Senate, left five people dead, resulted in damage to congressional offices and led to dozens of arrests. The House impeached Trump a week later for inciting the mob, and he is due to face a trial by the Senate.

Biden has tried to strike a more bipartisan tone, including by inviting congressional leaders from both parties to join him hours before his inauguration in a Mass at the Cathedral of St. Matthew the Apostle in downtown Washington. Biden is the country’s second Catholic president, after John F. Kennedy.

Before Harris and Biden took their oaths of office, the Rev. Leo O’Donovan, a Jesuit priest, former president of Georgetown University and longtime friend of the Biden family, gave the convocation prayer.

“Today we confess our past failures to live according to our vision of equality, inclusion and freedom for all,” O’Donovan said. “Yet we resolutely commit still more now to renewing the vision, to caring for one another in word and deed, especially the least fortunate among us, and so becoming a light for the world.”

On his first day as president, Biden is expected to sign 17 executive actions that target a range of issues, from addressing the pandemic to rolling back some Trump administration immigration policies. The Episcopal Church’s Office of Government Relations is closely following developments on such issues and encourages Episcopalians to get involved by signing up for Episcopal Public Policy Network alerts.