[Episcopal News Service] Drawing on the words of Abraham Lincoln and Martin Luther King Jr., Presiding Bishop Michael Curry implored Americans to choose community over chaos in a message to The Episcopal Church as the United States reels from the Jan. 6 mob attack on the Capitol, incited by President Donald Trump and led by his supporters.

“This past Wednesday, … a monument to democracy, the Capitol of the United States of America was desecrated and violated with violence by vandals. Lives were lost. A nation was wounded. Democracy itself was threatened,” Curry said in message to the church on Jan. 8.

Curry connected the current situation with past crises, including the Civil War, the civil rights struggle of the late 1960s and the apartheid regime in South Africa, as well as more recent ones such as the violent white supremacist march in Charlottesville, Virginia, in 2017, and last year’s murder of George Floyd at the hands of police in Minnesota.

“In the moment of a national crisis, a moment of great danger, … a people must decide, ‘Who shall we be?’” Curry said, offering a stark choice between further chaos and beloved community. 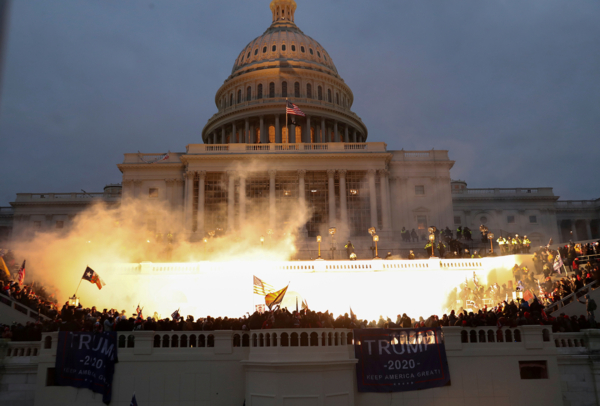 An explosion caused by a police munition is seen while supporters of President Donald Trump gather in front of the U.S. Capitol Building in Washington, D.C., Jan. 6, 2021. Photo: Leah Millis/REUTERS

Echoing the presiding bishop’s condemnation of the coup attempt, bishops and other leaders across The Episcopal Church have spoken out forcefully against the terrorist assault and the lies about election fraud that sparked it.

The bishop of Washington and the dean of Washington National Cathedral, after issuing a video statement on Jan. 6 condemning the attack and President Donald Trump’s role in instigating it, said they would offer brief prayers for the country along with interfaith partners every day at 5 p.m. until Inauguration Day.

“We invite you to spend five minutes in prayers for safety, solace and national unity,” the cathedral’s staff wrote. The first video in the series – available on the cathedral’s website and social media channels – features the Very Rev. Randy Hollerith, the cathedral’s dean, and Rabbi Bruce Lustig, senior rabbi of Washington Hebrew Congregation.

As the occupation of the Capitol was ongoing on Jan. 6, Hollerith and Washington Bishop Mariann Budde rebuked Trump and the terrorists in a video statement filmed at the cathedral’s altar, saying “there is nothing Christian about what we are witnessing today.”

“Mr. President, there has been no fraudulent election,” Budde said. “You called your supporters to our Capitol. You fed their wild fantasies and conspiracy theories. You whipped them into a frenzy. This is not acceptable.”

Some bishops also denounced the political leaders who are now distancing themselves from Trump after supporting and enabling his attacks on a democratic election and encouragement of political violence.

Atlanta Bishop Rob Wright observed that “some who have enabled inflammatory rhetoric for professional gain, now uncharacteristically called for restraint and calm. But you cannot be an arsonist for years and then say you are suddenly a firefighter. Words matter. Civility matters. Facts matter. The rule of law matters. Justice matters.

“What we saw yesterday was the reaping of what has been sown in our politics for too long. A constant diet of contempt and falsehoods are dangerous and fast-acting corrosives to our democracy, and we are made for more than that.”

Michigan Bishop Bonnie Perry also noted that the crisis was not an isolated instance of violence by a few people but a widespread embrace of dangerous lies.

“Last night, our country did more than stumble, we did more than fall,” Perry wrote. “Thousands of people in our country ran off the ramparts and crashed into a moat of chaos because leaders in our government at the highest level, our president and some members of Congress, have insisted upon perpetuating a myth of widespread voter fraud. Those lies, either the perpetuation of them or the tacit acceptance of them, [have] caused a vast swath of our country to now doubt the very means by which we make changes to our policies and laws. A vast swath of our country doubts our ability to hold fair elections.

“This belief is simply not true,” she continued. “What are we, people of faith, Christians, patriots to do? Speak the truth. Hear the truth.”

Some statements emphasized the idea that the language we use to describe such events matters.

“It is dreadful that few, if any, of those who used their words to encourage this violence have not expressed any regret or remorse for using language that incited these lawbreakers,” Central Florida Bishop Greg Brewer said in written statement. “They, too, should be held accountable.”

New Jersey Bishop William Stokes called the attack on the Capitol “grievous and evil,” adding it should be condemned in the strongest terms without equivocation.”

“It was an attack on this country’s democracy by terrorists bent on overturning a legitimate democratic election,” Stokes said. “A nation already suffering from the devastation of a worldwide pandemic, as well as the historic disease of racism, has now been further damaged by yesterday’s coup attempt.”

Some pointed out the discrepancies in the treatment of the Jan. 6 terrorists and Black Lives Matter protesters last summer, calling it an example of white privilege.

“This angry and mostly white group of insurrectionists largely departed the Capitol freely, in stark contrast to the way those peacefully protesting the oppression of Black Americans just a few months ago were rounded up in unmarked vans in the dark of night,” the Diocese of Maryland’s Truth and Reconciliation Commission wrote. “We saw white privilege on full and shameful display yesterday, and for those people who keep saying, ‘This is not who we are!’ we reply: ‘We’ is a broad category, and yes, this IS who some of us are.”

Some specifically decried the use of Christian imagery that was deployed during the assault on the Capitol.

“As Christians, perhaps the most horrifying image of yesterday’s planned and successfully executed chaos was the huge cross that some had lofted and waved repeatedly in the midst of the mob,” the Diocese of Maryland’s Truth and Reconciliation Commission wrote. “The politically motivated darkness perpetrated on our country on the Feast of the Epiphany, no less, must never be confused with anything to do with the ministry and commission of Jesus Christ to all the baptized.”

Some dioceses directed their members toward action. The Diocese of Michigan, in addition to hosting its own prayer vigil for the nation, encouraged its members to “continue the vigil” by contacting their local, state and federal representatives. Stokes called on those in the Diocese of New Jersey to observe Jan. 8 as a “a day of lamentation, fasting and prayer,” offering the Daily Office on Zoom and Facebook.

Western Massachusetts Bishop Douglas Fisher told his diocese that as painful as Jan. 6 was – “It felt like death,” he said – there is still cause for hope, and the Christian mission is more important than ever.

“Our democracy held,” he said. “Not even the president of the United States, abetted by some members of Congress and a mob of thousands, could take it down.”

“The violence and disgrace of the attack on our Capitol will not stop the Jesus Movement that seeks to change the nightmare this world is for so many into the dream God has for it,” Fisher said.