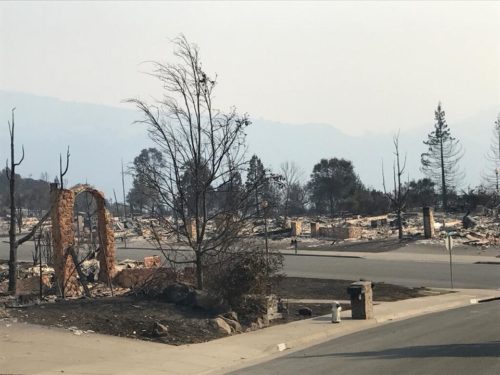 [Episcopal News Service] Episcopalians in Northern California continue to monitor the growing wildfires in their neighborhoods while finding ways to help their communities deal with the ongoing and expanding disaster.

The Rev. Jim Richardson, priest-in-charge at Church of the Incarnation in hard-hit Santa Rosa, told Episcopal News Service on the afternoon of Oct. 12 that he knows of parishioners, including those with health care experience, who are volunteering at Red Cross shelters. Other Episcopalians, he said, are donating their services elsewhere and offering material help.

The Rev. Daniel Green, rector of St. John’s Episcopal Church in Petaluma and dean of the Petaluma deanery, was working a phone bank, Richardson said, set up to connect evacuees with services.

Some evacuees had been sleeping at Incarnation since the fires broke out, but the city issued a voluntary evacuation order the night of Oct. 11. Richardson said the fires had gotten “way too close so we got everybody out, made sure they had places to go and left.”

Earlier in the day, seminarians from Church Divinity School of the Pacific, the Episcopal Church-affiliated seminary in Berkeley, about 55 miles south, delivered bedding to the church. They had planned to spend the night, but Richardson sent them back to the East Bay school.

Richardson headed to his sister’s house in Petaluma for the night. He came back to Incarnation the next morning but was planning to leave again that evening.

The parish sent out an e-blast the morning of Oct. 12 saying the church was open but urging recipients to stay where they were, assuming they were safe there. Richardson has a growing list of where his parishioners have evacuated to, most going to stay with family and friends elsewhere in the San Francisco Bay Area or in the state. Those who head further south in the Bay Area are escaping flames but the smoke is following them. Air quality in San Francisco Oct. 12 was reportedly as bad as that found in Beijing.

The fires that began sweeping through Northern California the night of Oct. 8 have grown, and Richardson said there is some concern that they will merge. “They’re getting more serious over in Napa and Sonoma” to the south and east of Santa Rosa, he said.

The fires are fast-moving, forcing some people to make hasty retreats. Communications have been spotty at times due to cell tower damage and major power outages. Thus, reports of the number of missing, while large, cannot be translated into the number of dead, officials have said.

“We are in regular communication with the dioceses throughout California as they monitor the fires, assess damage and coordinate the sheltering and feeding of those affected,” Katie Mears, director of Episcopal Relief & Development’s U.S. Disaster Program, said in an Oct. 12 update.

“I am very impressed by the wisdom among leaders in the Diocese of Northern California,” she said. “Margaret Dunning, the diocesan disaster coordinator, and others have been working tirelessly for over six years to increase congregational preparedness and to network with neighboring dioceses and NGO partners. The diocese has responded successfully to several smaller events over the last few years. This large-scale emergency builds on that wisdom and experience.”

The National Interagency Fire Center in Boise, Idaho, reported at noon MDT Oct. 12 that California had 10 large fires or complexes of fires. Approximately 6,500 firefighters continue to battle the blazes burning over 162,448 acres. None of those fires are contained. A “contained” fire means that firefighters have established a perimeter and enclosed the fire within it. The center’s definitions of “contained,” “controlled” and “out” are here.

The center said Oct. 11 on Facebook that it had mobilized more than 75 crews, 50 engines and a handful of air tankers for the California fire suppression efforts. That effort comes in addition to local and state resources. Air tankers drop either water or what is known as “slurry,” a fire retardant made up of chemicals, wetting agents and thickeners, and are colored with dye, usually red, that mark where “slurry bombers” have laid them down. Slurry can also act as fertilizers to help the regrowth of plants after the fire.

Meanwhile, the fires are reportedly moving closer to St. Patrick Episcopal Church in Kenwood. Richardson said that a person had a “visual” sighting of the church on Oct. 11, but its status is unknown. The Rev. Karen King, the church’s interim priest, fled the area in the evacuation.

Trinity Episcopal Church in Sonoma said on its Facebook page early afternoon Oct. 12 that it believes all its parishioners are safe and sound, many having evacuated and are with family and friends throughout the Bay Area. The parish had to cancel a memorial service planned for Oct. 14.

“We are planning on Sunday services as long as those of us evacuated are allowed to return to Sonoma,” the post said. “At this point, an almost hourly decision.”

Staff at the Bishop’s Ranch in Healdsburg, a Diocese of California conference and retreat center north and slightly west of Santa Rosa, said that so far, the ranch has been safe and out of the way of the fires. “However, many of the ranch staff, family and neighbors have been evacuated and in some cases, have lost homes,” Executive Director Sean Swift said. Some staff families and neighbors have taken shelter at the ranch.

Over on the other side of Sonoma County, just off the Bohemian Highway outside of Camp Meeker, California, St. Dorothy’s Rest Camp & Retreat Center had said earlier in the week its rustic, mostly wood buildings were safe but that staff members expected to lose power at any minute. The Diocese of California facility was sheltering some people. ENS calls to the camp Oct. 12 went unanswered.

The Rev. Josephine “Phina” Borgeson, who lives outside of the evacuation zones in Santa Rosa, said Oct. 11 that she had not yet had to leave. She lost power for a day and a half, but it was restored on the evening of Oct. 10. “Businesses nearby are open, and local businesses have been generous and neighborly,” she reported on Facebook. “And I’m very thankful for wonderful public officials, for those who are working to fight fires, to keep the peace, and to see that those who have been displaced get the help they need.”

During the afternoon of Oct. 12, Borgeson told ENS via Facebook Messenger that there was blue sky, a hopeful sign, in her neighborhood southwest and west Santa Rosa. However, she said, “the death toll will rise, I am afraid.”

Borgeson, who is a deacon, said she had been talking with fellow members of the Sonoma County Food System Alliance about how the fires are and will continue to stress the emergency food supply network. She said there was a local benefit set for that evening to help farmers who have losses. 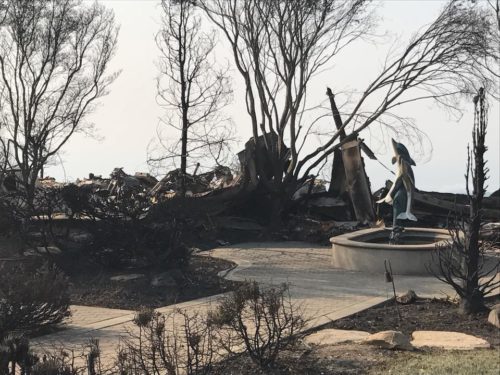 Richardson said the area that so much of the national media is calling “Wine Country,” seemingly implying it is filled only with wealthy growers and drinkers, is far more economically diverse.

“This is far more than the wine country,” he said.

Santa Rosa is 40 percent Latino, according to Richardson.

“This is a working town. This is an agricultural center, but it is also an industrial center in the North Bay,” he said. “And agriculture here is far more diverse that just wine. The dairy industry is huge and incredible. There’s a lot of farm workers who live here.”

It is true that some major wineries have been destroyed but, Richardson said, “this fire is not respecting class. It’s just burning people out, regardless of their economic condition.” Some Incarnation parishioners live in expensive developments and some in trailer parks, and some in homes than rank in between. And some of the parishioners have lost homes.

Richardson said he has spent part of his time since the fires began fending off donations of material because he is not sure what he can do with them right now. “We don’t need right now but we might need them later,” is what he has been telling people.

“People have been very generous from all over the country and all over the world,” and the parish has started a fund for financial donations to put to good use when the fires are out.

“When the fires are out and the smoke clears and there’s disaster somewhere else and people forget about the last place, that’s when the needs really start to grow,” he said. “This community is just devastated – devastated – it’s never going to be the same again. There’s entire neighborhoods that are just gone.”

But the feeling of community has remained, he said. Richardson was at a hospital with a parishioner and told the emergency room nurse that the person was an evacuee. The nurse told him “we are all evacuees,” noting that six nurses and two doctors had all lost their homes but were there caring for people.

“There’s a knitting together of the community in a way that is pretty incredible to see,” Richardson said.

Previous ENS coverage of the fires is here.